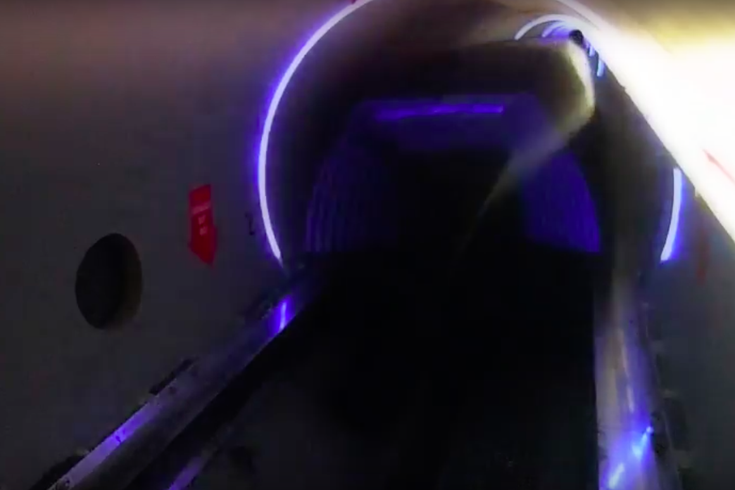 This screenshot is of a video of a test run of the Hyperloop One transit system that took place in Nevada.

In a new video published to YouTube Wednesday, Hyperloop One gave another glimpse of its potentially revolutionary transit system, showing a test run that took place in Nevada in which one pod achieves speeds of 192 mph.

The Hyperloop One wants its pods to reach 750 mph in the near frictionless vacuum tubes they travel through, according to Newsweek.

As the publication notes, the Hyperloop system was first introduced by entrepreneur Elon Musk in 2012. He open-sourced the idea, allowing private companies like Hyperloop One — which Musk is not affiliated with — to try and develop it.

Musk himself hasn't dropped pursuing development of the transit system. In July, he raised eyebrows when he tweeted he had gotten "government approval" for a Hyperloop route that would connect New York City, Philadelphia, Washington, D.C. and Baltimore.

The entire route — from New York to D.C. — would take just 29 minutes, he claimed.

Officials quickly threw cold water on the supposed approval. Representatives from all four cities essentially said they hadn't heard from Musk and didn't envision implementation of the Hyperloop route anytime in the near future.

Philadelphia spokesperson Mike Dunn said they had no contact with Musk on the matter, adding in a statement to PhillyVoice that "there are numerous hurdles for this unproven 'Hyperloop' technology before it can become reality."

So, you probably shouldn't expect to get from Philly to the Big Apple by train in mere minutes anytime soon. Again, it's fun to dream though, right?