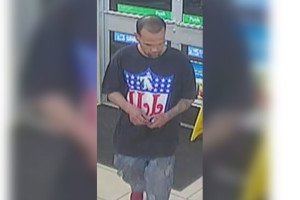 The Philadelphia Police are seeking this man following a robbery that occurred at a Port Richmond convenience store on Wednesday.

Philadelphia police are seeking a suspect in a violent assault and robbery in Port Richmond on Wednesday.

The suspect – dressed in a dark short sleeve shirt with an NFL-like logo that read "ill," as well as blue jeans and red sneakers – used a screwdriver to stab the 42-year-old clerk in the back, police said.

WATCH the store's surveillance video of the assault, here:

When the clerk attempted to retrieve a baseball bat from under the counter to defend himself, the suspect wrested the bat away and began hitting the clerk in the head before stealing several packs of Newport cigarettes.

According to police, the clerk suffered head lacerations during the robbery.

Police are asking anyone who may have information about this suspect to contact 911 immediately. If you'd like to submit a tip anonymously, you can contact police at (215) 686-8477 or text a tip to 773847.