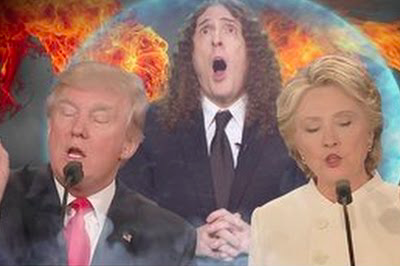 There is perhaps one man in these United States who is truly equipped to deal with the insanity of the 2016 presidential election. The admirable work of "Saturday Night Live" notwithstanding, the esteemed scholar of American zaniness is unquestionably one Weird Al Yankovic.

In the aftermath of the final presidential debate last Wednesday night in Las Vegas, the New York Times' OpDocs series turned to the Grammy-winning parodist for a remix of the battle between Hillary Clinton and Donald Trump.

It's a thing of beauty.

Weird Al has never been particularly overt about his political views, though he is a well-known vegan and his 1989 film "UHF" depicts societal themes that suggest a fairly obvious tilt toward the liberal end of the spectrum. His home, as RollingStone discovered two years ago, is super weird.

The most fitting way to describe the 2016 election in terms of Weird Al history is probably the classic "Everything You Know is Wrong" off the Platinum 1996 album "Bad Hair Day." (Note: this will be stuck in your head forever).