Wawa becomes the official hoagie of the Baltimore Ravens, for some reason

Wally the Goose, how could you betray your old pal Swoop like this? 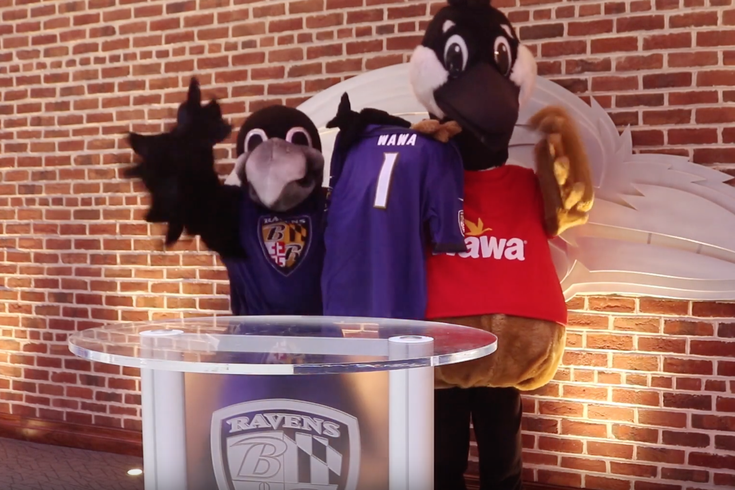 Baltimore Ravens mascot Poe poses with Wawa mascot Wally the Goose. Wawa is now the official hoagie of the Ravens, which means the Eagles no longer hold Wawa's only NFL partnership. It's a dang shame.

A classic Italian, a meatball shorti, or a smattering of Gobblers before a November showdown against the Giants — the common denominator is Wawa's omnipresence in the area.

Which explains why Wawa is now the official hoagie of ... the Baltimore Ravens?

It sounds strange, but it's true: Wawa and the Ravens announced the multi-year deal Monday, according to the Baltimore Sun, marking the convenience store's third partnership with a team in the U.S.'s four major sports leagues.

"Wawa is thrilled to partner with the Ravens to make deeper connections with some of the best fans in football and reach communities all over the city of Baltimore and beyond,” Adam Schall, Wawa's Senior Director of Store Operations for Maryland, said in a statement Monday.

Wawa also released a video featuring Ravens mascot Poe and Wawa mascot Wally the Goose, in which the duo does assorted football things:

The partnership makes some sense, in that 2020 will mark the 50th anniversary of Wawa opening its first store in Maryland, according to the company.

But still: What is going on here? Wawa is already the official hoagie of the Eagles, and the official breakfast sandwich of the New Jersey Devils. Baltimore doesn't claim Wawa the way Philadelphia does, or the way New Jersey does. Don't even try.

According to this study from a few years back, Baltimore doesn't even use the term "hoagie" when it describes a hoagie. The city calls them subs!

But still, this feels a little bit like betrayal.

Luckily, I know how to solve this: When the Eagles play the Ravens next season, the winner gets to claim Wawa as the respective team's official hoagie maker. It's the only fair way, and I'm not just saying that because the Eagles are expected to contend for championship for the next half-decade while the Ravens have Lamar Jackson as their starting quarterback.