Wayne-based social enterprise pushes gaming with a cause

Company donating coats to kids for 'good deeds' in game

By Brandon Baker
PhillyVoice Contributor
The Arts Video Games
from 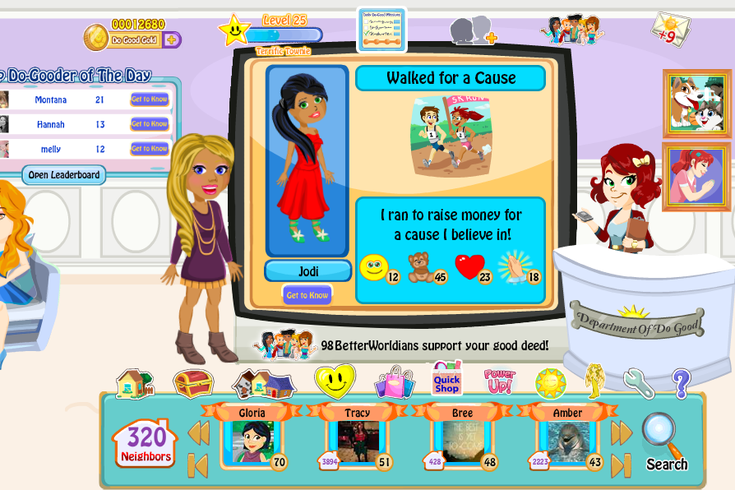 A screenshot from the Wayne, Pa.-developed Facebook game, "A Better World."

Wayne, Delaware County-based social enterprise A Better World is attempting to shake up the image of video games as strictly for entertainment by incentivizing players of its Facebook-based, life-simulator game to do good deeds -- both in-game and in the real world.

“What we do is cross the divide between this imaginary world by bringing in real world good deeds, getting people to report them," co-founder Raymond Hansell told PhillyVoice. "It's a virtual world game not unlike CityVille or FarmVille, the big differentiation being that instead of buying virtual cows and chickens and swapping them with your neighbors, in this virtual world what you’re doing is doing good deeds."

Here's how it works: Users report real-world good deeds that are voted up or down by other users, and "hopes, dreams and gratitudes" are expressed are tallied through the game's interface as virtual good deeds. Those good deeds can then be used as currency to shop for clothing and furniture; through Jan. 1, it's the only form of currency that will be accepted.

For the holidays, the company is pushing the do-good concept by challenging its 3.5 million users to rack up one million of those good deeds. In return, the company will donate, Hansell said, about 1,000 coats through the Philadelphia-based nonprofit Operation Warm. It's one of two dozen causes the company has supported through the game since it was founded.

Hansell, along with his wife MarySue Lucci Hansell and son Gregory Hansell, dreamed up the idea of what they call "cause gaming" in 2009, having spent years trying to decide on their next venture after taking their previous venture, the Newton Square-based call center company RMH Teleservices, public. After accumulating wealth, they wanted to find a way to give back and settled on the social enterprise in part because of Gregory's tech experience as well as their itch to add a philanthropic twist to the Farmville formula. (Though they do make money through paid content in the game, if you're wondering.) The game launched in 2011.

Moving forward, the company hopes to make the Web game available through tablet app stores and Facebook-equivalent social networks around the world. They're also always looking for new talent.

“We’re in the process of reaching out to people throughout the country and saying, 'Hey, do you want to join us in this,’" Hansell said. "We’ve put millions of dollars and years of our life into this, but we’re looking for more people to help.

"We want to unleash the power of doing good."