Week 9 NFL odds: Point spread and total for every game, including Eagles vs. Chargers 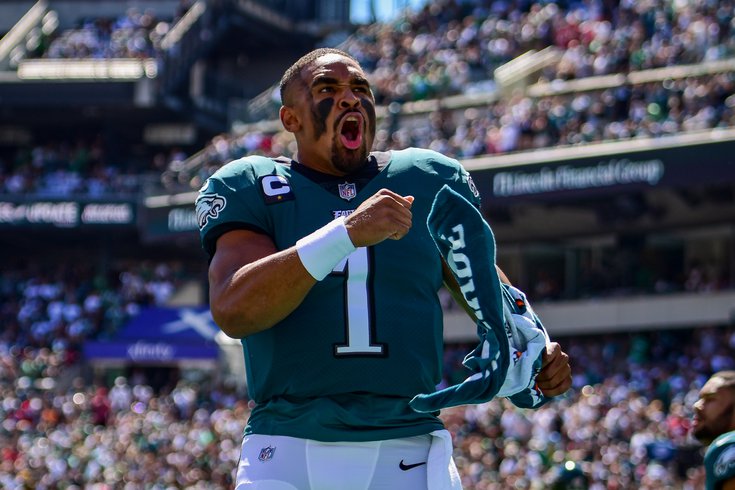 Jalen Hurts and the Eagles return home to host the Chargers on Sunday.

Heading into Week 9, we're officially reaching the midpoint of the 2021 NFL season, and while a few teams have separated themselves from the back — both positively and negatively — there's still quite a bit of parity. Nineteen of the leagues 32 teams have between three and five wins, while just one team remains winless (the Lions) and no teams are undefeated.

It's going to make for a crazy wild card race this year with the league adding another playoff spot in each conference and could keep some teams in the race longer than they might've been in past years, which may have changed a few organizations' approaches to Tuesday's trade deadline.

Four more teams are on bye this week, making it a slightly smaller slate of games than it was a week ago, but there are plenty of intriguing matchups and just two games featuring double-digit spreads, so perhaps we'll get back into the closer brand of football we saw the first few weeks of the NFL season that has appeared to go away recently. Either way, there's plenty to watch — and bet on — this week.

As we do every week, let's take an early look at all the Week 9 odds around the NFL for the upcoming round of games...

The Colts are fresh off their overtime loss to the Titans in which Carson Wentz threw one of the worst interceptions you'll see — even if he actually got lucky in doing so — and the Jets are coming off their biggest game of the season, a home win over the (at the time) first-place Bengals. Despite trading a draft pick for Joe Flacco, New York will again be starting Mike White, who had a big game in his debut. Will the magic run out in Indy?

Minnesota lost to a Dak Prescott-less Cowboys team on Sunday night, and will now have to travel to Baltimore to face a Ravens team that will have their starting quarterback. Oh, and they're coming off a bye.

The biggest X-factor in this one is the status of Panthers RB Christian McCaffrey. If he can play, Carolina's chances go up significantly. But he's not the only one with injury questions. The Panthers don't even know if Sam Darnold will be able to go. With injury questions that significant, the safer bet appears to be on the favorite, but definitely keep an eye on McCaffrey and, to a lesser extent, Darnold.

Both of these teams are coming off losses that should hurt for different reasons. For Cleveland, it was a division loss to the Steelers. For Cincy, it was an embarrassment at the hands of the lowly Jets and their backup QB. Both these teams are very much still alive in the AFC North, so this one could have postseason implications down the line.

The Broncos just shipped out Von Miller ahead of the trade deadline and could be looking to move others as well, even though they're just 4-4. Dallas, on the other hand, will likely be getting Prescott back on Sunday, and if that's the case, this line could creep up even higher.

This line opened closer to 10.5 points and is already up over two touchdowns as the Bills have the best average margin of victory in the NFL (17.1 PPG). It wouldn't be surprising to see them increase that number on Sunday against the 1-6 Jaguars.

Woof. I feel bad for anyone forced to watch this one. It's going to be like that episode of South Park where no one wants to win the game but for draft picks instead of summer fun.

The Saints lost Jameis Winston for the season in their win over the Bucs on Sunday, and that's a shame considering their defense had them playing like a contender, just a half game behind the defending champs with a chance to tie them for the division lead with a win over the Falcons. Taysom Hill will take over if he's healthy, and since oddsmakers still see New Orleans waking up Monday tied for first place in the NFC South, it's a good bet they think he'll play.

The Giants nearly pulled off a shocking upset on Monday night, but they're still the Giants. And they'll be playing a well-rested Raiders team coming off a bye following their Week 7 win over the Eagles. Even if Saquon Barkley does return for this one, it's tough to imagine him getting the full workload.

How this spread is 1.5 points at most sports books, I'll never know, especially after it opened as a three-point spread in most places. The Eagles shouldn't be getting any extra boost playing at home, given that they're 0-3 at the Linc this season. Maybe some are worried about the classic "West Coast team traveling across the country" trap, but that hasn't really been a thing in recent years and not only is this a 4 p.m. game, but it will feel even later with everyone getting an extra hour of sleep on Saturday night.

Also, while we're at it: abolish Daylight Savings Time.

The Chiefs have looked downright bad at times this season and overall certainly haven't look like the team that had become the class of the AFC in recent years. This line has moved slightly (down from -2.5 at opening), likely due to the KC's narrow win over the Giants. But the 4-4 Chiefs still remain the favorites over the 7-1 Packers, who haven't lost since Week 1 and are coming off a long break following their TNF win over the previously undefeated Cardinals. I guess oddsmakers are still expecting Andy Reid's team to flip the proverbial switch at any moment.

It certainly feels like the Cardinals should be favored by more in this one — they might be depending where you look — and that's likely because the status of Cardinals' QB Kyler Murray remains up in the air. If he's good to go, there's a good chance this spread grows.

The absence of Derrick Henry, the NFL's best running back, really puts a damper on this primetime matchup between the 6-2 Titans and the 7-1 Rams. This line opened as Rams -4 but after the Derrick Henry injury news and the Von Miller trade, it's been leaning more and more toward Los Angeles.

Pittsburgh is a touchdown favorite at home against a Bears team that's coming off a loss to the 49ers. Meanwhile, the Steelers, thanks to their win over the Browns on Sunday, are hanging tough in a competitive AFC North in which every team is over .500. Will we be treated to some more highlight reel plays from Justin Fields? Or will the veteran Ben Roethlisberger show the kid a thing or two?