Week In Review: Let’s stick a fork in the DNC 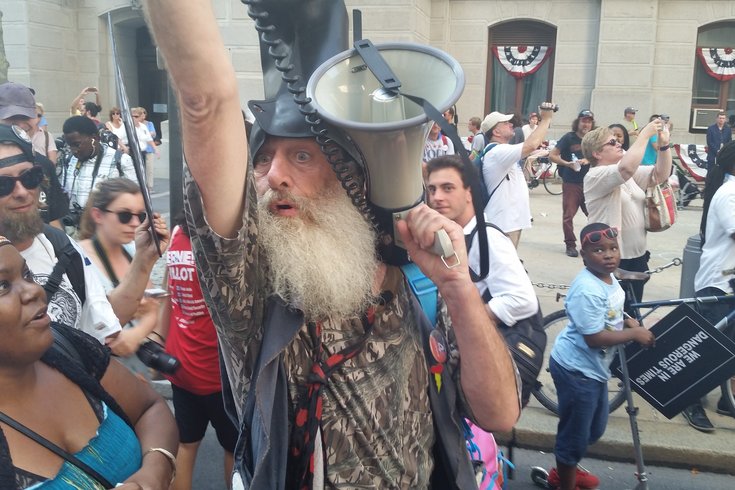 Vermin Supreme was here for the DNC. Hi, Vermin!

Philly strip clubs say the convention did not provide a notable increase in business. "I even tried adding a couple deals," says dancer Sparkle. “For $20, I’ll give you a lap dance. For $50, I’ll let you lecture me on how Bernie was ripped off by a rigged system.”

Members of Occupy Wall Street say they will continue to camp in FDR Park after the DNC. “Except now we’re called ‘Occupy Parks’ and our main interests are cookouts and frolfing.”

The DNC draws several celebrities to Philadelphia, including Susan Sarandon, Rosario Dawson, Danny Glover, Bryan Cranston, Ashley Judd and lots more. “I do not recognize any of those names,” says a man who, for about a week now, has been the world’s biggest Scott Baio fan.

Bernie Sanders delegates attempt to disrupt the convention with chants and glow-in-the-dark shirts. “You might call me petty and immature, but I’m just sticking to my ideals,” says Bernie Bro. “You know, I was at the concession stand earlier and they only had Coke Zero instead of Diet Coke, so I decided to make a statement by drinking pee instead. And when my hotel didn’t make the bed just the way I like it, you better believe I lodged several complaints with management before marching right out onto the street to sleep in a dumpster. My way or the highway, people.”

The Cannabis Pride Parade marches its 51-foot inflatable joint despite heavy rain. “In fact, everything was going great until Brad tried to light it up. My god. Melting plastic. Blond dreadlocks raining down from the sky. It was like the Pothead Hindenburg.”

The city bans parking in the median on Broad Street during the convention. Cops spend the entire week having their cousins’ cars towed.

Lady Gaga, Lenny Kravitz and DJ Jazzy Jeff play “Camden Rising” concert across the river. Ugh, not this. There isn’t enough room on the internet for us to paste that “full disclosure” message again.