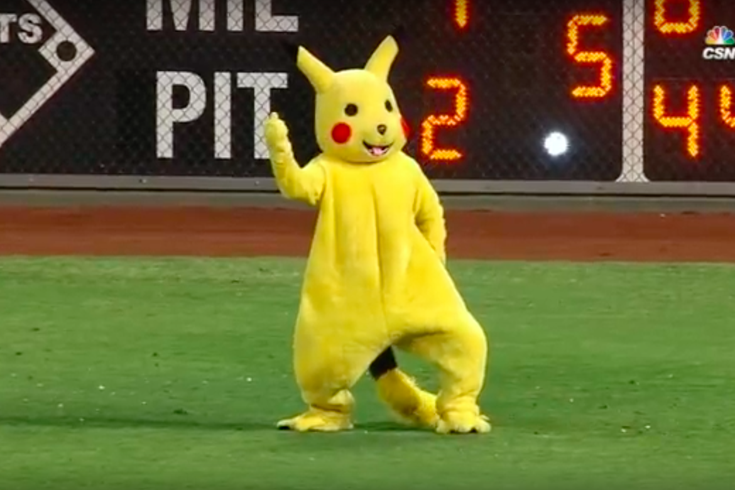 Pikachu has a point.

Philly police union slams the exclusion of family members of police officers killed in the line of duty from the list of speakers for the upcoming Democratic National Convention. “Furthermore,” says union spokesperson, “Donald Trump got Scott Baio to speak and Hillary doesn’t even bother asking Erik Estrada? She’s a disgrace and she should be in prison. In the name Benghazi, the NAFTA and the Whitewater spirit, Amen."

Temple President Neil Theobald announces his resignation after the school's board of trustees voted "No Confidence" in him earlier this month. A lone tear slides down his cheek as he takes his Trump University diploma down off the wall. How did it all go so, so wrong?

The Pennsylvania Turnpike Commission announces it will raise its tolls starting next year. “If you don’t like it, you are welcome to shop around for other turnpikes.”

More than a hundred people sign a petition to change North Wildwood back to its old name, Anglesea. Immediately after signing it, the citizens return to their regularly scheduled knife fights in the streets and wrestling matches in baby pools full of Tully Nut mix. Winner gets a free beach tag, you guys.

A new poll reveals that nearly a third of all Pennsylvanians, including Philadelphians, would support the city breaking away from the state. This one's all us, Pennsylvania. And it’s because of that really freaky X-Files episode about those three inbred brothers in central Pa. who kept their mother on a skateboard under the bed. It haunts our dreams. It's all we think about when we see rolling, like, corn fields or whatever you have out there. It's why we don't visit. It's why the Amish have to come here to sell us fruit. Just let us leave. It’s time. The nightmare must end. We’re begging you.

Marijuana activists say they plan to march a 51-foot likeness of a joint from City Hall to the Wells Fargo Center during the DNC. “Then again, we make a lot of plans.”

Pikachu gives Phillies fans the finger at Citizens Bank Park. Pukémon surveys the scene from heaven and smiles. Then he barfs on a child, which is still his favorite thing to do and totally not a crime up there.

Near-record high temperatures hit the region. “This will not affect the way I conduct my business,” says horse that can somehow take a huge crap while dragging a carriage full of tourists around Old City.

The FAA declares a “no drone zone” for a 30-nautical-mile radius around Philadelphia during the convention. “Also, and we know this isn’t really our jurisdiction, but we’re banning those fake-ass hoverboards, too,” says FAA spokesperson. “Also, Segways still look pretty stupid to us, so they’re off-limits. Heelys, though, they are okay. Go nuts.”

A choir of 100-girls from all 50 states publicly asks Hillary Clinton to let them sing the national anthem during the convention. “Looks like we can’t fit all of you, so I’m just going to pick some states at random,” says Clinton. “How about Ohio, Pennsylvania, Colorado, Florida, Iowa, Michigan, Nevada, New Hampshire, North Carolina, Virginia and Wisconsin? Just off the top of my head.”