We're going streaking: What they're saying about the red-hot Flyers 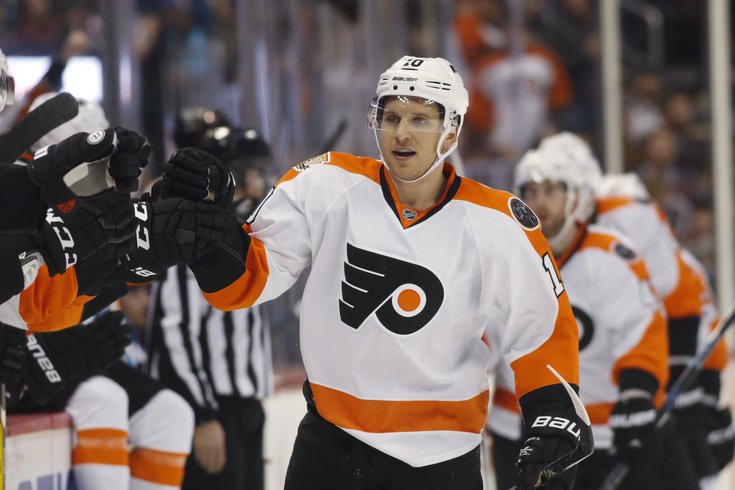 Philadelphia Flyers center Brayden Schenn is congratulated after scoring a third-period goal against the Colorado Avalanche.

The Flyers are currently the hottest team in the NHL. They've now won 10 straight games for the first time in 31 years thanks to a 4-3 win over the Avalanche on Wednesday night.

Unfortunately for Dave Hakstol's team, they haven't been able to make up much ground in their division because three other Metropolitan teams are currently riding win streaks of their own. The Flyers have also played 32 games, more than any other Eastern Conference team. Only two teams (the Rangers and Bruins) have played more than 30 this season, and more than half (8) have played 29 or fewer.

At 19-10-3, the Flyers are currently in third place but sit just one point ahead of the first wild-card team, the Blue Jackets, who have five (yes, five) games in hand on Philly. Where the Flyers have been able to gain ground, however, is by putting further distance between themselves and the first team currently out of the playoff picture –the Tampa Bay Lightning, who are now nine points behind the Orange and Black.

The standings, however, aren't the most important thing in mid-December. And it's not like the Flyers can do much more than they already are, especially over the last three weeks.

Let's take a look at what they're saying about the team's current hot streak:

It's great that the Flyers decided to go streaking. It's been a hell of a run and extremely fun to watch, what with all the late-game drama. But will this be the same team we see when the playoffs roll around? This type of winning is unsustainable forever, but it's beginning to look like the Flyers team will see come springtime will more closely resemble what we're currently watching than what we saw through the early portion of the season. At least that's what ESPN's Joe McDonald believes:

The Philadelphia Flyers extended their winning streak to 10 games with a 4-3 victory over the struggling Colorado Avalanche on Wednesday. It's the franchise's longest run since a 13-game streak during the 1985-86 season. Philadelphia has propelled itself into the playoff picture in the Metropolitan Division -- they are tied with the New York Rangers for second, but the Rangers have a game in hand -- with 41 points.

How far can the Flyers take this? I'm not talking about the winning streak, because that could end tomorrow, but Philadelphia's chances of earning a playoff berth are looking good. It helps that goalie Steve Mason has been solid with an 8-0-0 record, along with a 2.33 goals-against average and a .926 save percentage in his past eight starts. Forward Brayden Schenn, 25, has also become clutch, scoring the winning goal in three consecutive games. The Flyers are a confident group -- win, lose or draw. You get the sense they can sustain this type of success. [ESPN.com]

It’s been a while…

Our own Rich Hofmann has a great breakdown comparing life during that 1985 run to the Flyers' current streak. The world has changed quite a bit, but some things aren't so different. Like, for example, the defending NCAA men's basketball champion ...

Not their first rodeo

The final 84 seconds of their 4-3 win over the lowly Avalanche on Wednesday night was really a sight to behold. Here's how Tim Panaccio of CSNPhilly.com describes it:

There was one minute and 24 seconds left, with the faceoff in front of goalie Steve Mason, where a gassed Flyers team desperately clung to a 4-3 lead. ... The puck would remain in Colorado’s end until the final whistle, while the Avs would attempt five shots — two of which actually reached Mason — while the rest were either wide or blocked.

Thing is, it was pure chaos because defenseman Andrew MacDonald broke his stick shortly after the faceoff. Bellemare gave MacDonald his stick and grabbed a right-handed stick from Wayne Simmonds.

“It was a rodeo after that point,” Simmonds said.

That’s when all hell broke loose because Bellemare is a lefty and couldn’t use it against any of the six Avs pressing for a tying goal. [CSNPhilly.com]

Philadelphia teams in the 4 majors sports now have had 41 double-digit winning streaks since 1900 ... The Eagles own none of them ...

This current win streak has had quite an impact on their standings in various outlets' NHL Power Rankings. 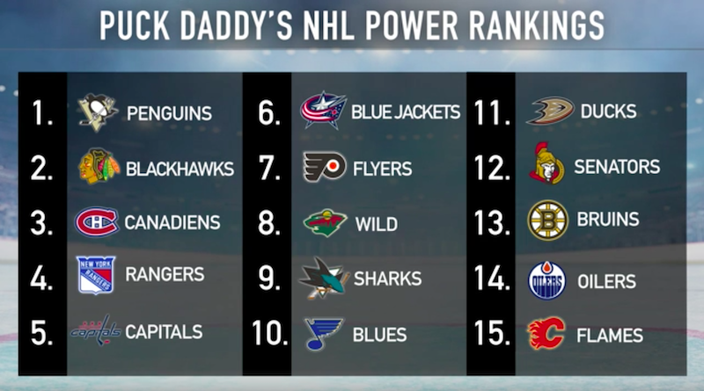 So how about that Metropolitan Division, eh? These guys may never want December to end the way it has been going lately. So far this month, the Columbus Blue Jackets, Philadelphia Flyers, Pittsburgh Penguins and Washington Capitals are a mind-boggling 25-1-1.

So it’s no wonder those four teams find themselves holding down the No. 1, 2, 3, and 5 spots in our weekly thn.com Power Rankings. (Last week’s rankings in parentheses.):

While the Flyers have gotten quite a bit of production from their top forwards, Steve Mason has flat out stolen a few of these games as he rides a hot streak of his own.

Steve Mason is the first #Flyers goaltender to win eight consecutive starts since Ron Hextall win 9 in a row in 1996-97, per Elias.

The Flyers have a long road trip coming up at the end of the month, so time is running out for you to go down to the Wells Fargo Center and watch them try to extend their streak in person.

"We want to keep it alive. We know in Philly they're enjoying it as much as we are right now," Giroux said prior to Wednesday night’s win. "It's not going to be easy to keep the streak alive. Every game is a big game, but right now we're doing a good job of staying focused on how we need to play."

Here's a look back at some other Flyers’ win streaks over the last 31 years, via Dan Levy of billypenn.com.

The ’85-86 Flyers [who won 13 straight] leveled off a bit after that 15-2 start, but closed the season strong, winning 11 of their last 13 games — win streaks of six and five with two losses in between — for a record of 53-23-4, 110 points and a first place finish in the Patrick Division before falling in the first round of the playoffs to the hated Rangers.

The ’94-95 Flyers finished first in their division as well, ending that season with a 28-16-4 record and a loss in the conference finals to the Devils. Terry Murray’s team had streaks of nine and eight wins, rather impressive in a season of just 48 games.

Technically the 1993 Flyers won 10-straight games too, though it spanned two seasons, finishing the ’92-93 campaign — an 84-game slate — with eight wins, then winning the first two games of the ’93-94 season.  [billypenn.com]

The Flyers are cleaning up this year when they have a man advantage.

And the PK ain’t too bad either

The Flyers' penalty kill is 12 for 12 in the last three games. The top penalty killers against Colorado were MacDonald, Ivan Provorov, Bellemare, and Chris VandeVelde. Overall, Provorov has played 24-plus minutes in each of the last two games. [philly.com]

Carson Wentz isn't the only Philly sports figure who is gets free drinks whenever he's in North Dakota. The Flyers coach is quite popular thanks to an extremely successful run at the University of North Dakota. Even Chris VandeVelde is getting some love...

One of Hakstol's former alternate captains at UND, Chris VandeVelde, is playing a key role for his Flyers team, too. VandeVelde has five goals and 10 points for the Flyers, while playing in all 32 games. [grandforksherald.com]