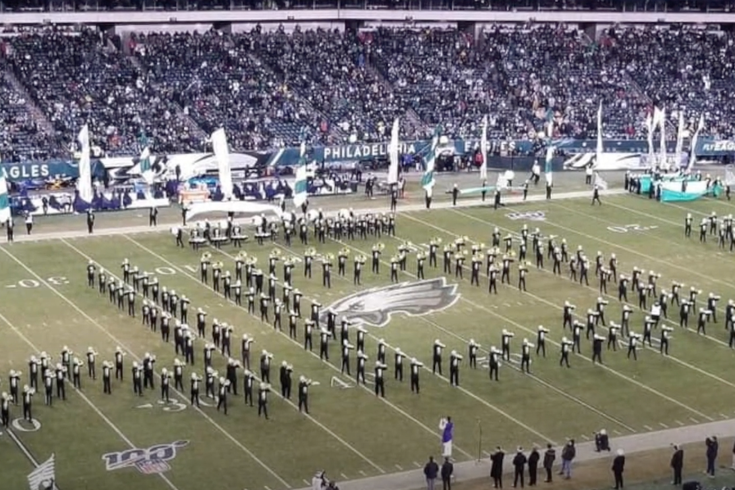 The West Chester University marching band was the last ensemble to perform at halftime of an Eagles' home game in January 2020.

Eagles' fans who typically use halftime for a bathroom break or to re-up on food and beverages may want to stay in their seats at Lincoln Financial Field this Sunday for a performance by a local marching band.

The West Chester University marching band will perform at halftime of the Eagles' home opener against the San Francisco 49ers on Sunday.

The five-minute halftime show will be a modified version of what the marching band does before every West Chester football game. The performance will include the school's alma mater with an edit to include the Eagles' chant, Bon Jovi's hit song "Livin' On A Prayer," and "Fly, Eagles Fly" in a new arrangement.

The ensemble, which is also known as the "Incomparable" Golden Rams, was the last band to perform at an Eagles' game. The marching band performed at halftime of the Eagles' 17-9 playoff loss to the Seattle Seahawks in January 2020, the last time the Birds were in the postseason. No one performed halftime shows at the Linc last season due to the COVID-19 pandemic.

Adam Gumble, the director of athletic bands at West Chester, said that performing at halftime of the Eagles' playoff game was a "fantastic" experience. But not every marching band member could be there because of the school's winter break, and the ensemble didn't have access to its uniforms, Gumble said.

Marching band alumni had to step in for those students who couldn't make it to the performance, and the ensemble wore green and black outfits that were provided by the Eagles.

The entire marching band, dressed in its traditional purple and gold uniforms, will perform at halftime of Sunday's game, according to Gumble.

“Playing for 60,000+ fans in an NFL stadium is amazing for all involved,” Gumble said. “And it’s also a fantastic experience for our students. This year promises to be just as special.”

The school's marching band plays regularly at West Chester football games and at special university and local community events. The ensemble has also performed at several regional and national exhibitions.

Founded in 1889, the marching band became the first from a Division II school to win the Sudler Trophy, which is considered the Heisman Trophy for collegiate bands.