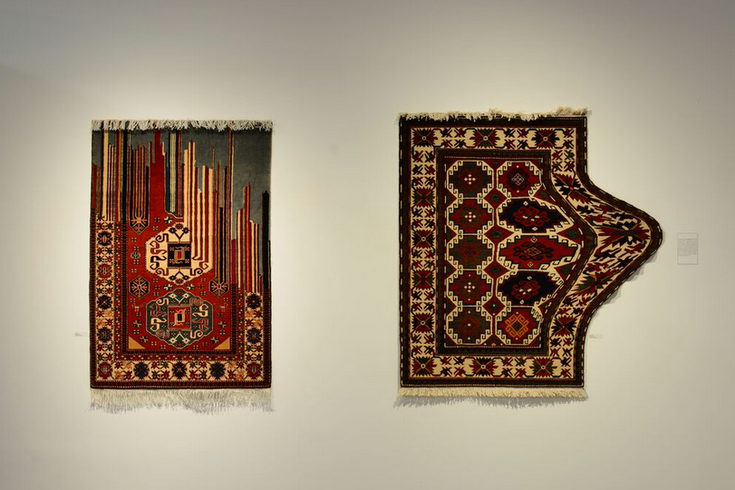 Artist Faig Ahmed's distortion and extension of traditional carpets is one of more than 3,000 pieces in the West Collection, which will soon have a new home in Fishtown.

A contemporary art museum containing more than 3,000 pieces will have a new home in two industrial warehouse buildings in Fishtown, slated to be the permanent destination for the West Collection.

The buildings take up 1115-27 Frankford Ave., Curbed reported, with permits revealing plans to add a five-story addition to the property. Developers will include commercial space on the first floor, a library and culture space on the third and fifth floors, and offices on the second and fourth floors.

The West Collection comprises about 3,100 pieces, from more than 700 artists, that have been curated by billionaire Alfred P. West, the chairman and CEO of SEI Investments Company, and his daughter Angela Paige West. The collection includes well-known, international, contemporary artists while also supporting local and emerging artists.

Gallery Installation with Caroline Lathan-Stiefel (back of image) and Michael Beitz (table). These works were previously installed in the Gallery at SEI, Oaks. #carolinelathanstiefel #michaelbeitz #westcollection #seioaks

Multi-disciplinary artist Taro Hattori creates installations and sculptures investigating the conceptual constructions of violence and power through symbolic objects and information in our society and history. This image was captured at SEI investments, Oaks, PA. ‪#WestCollection‬ ‪#TaroHattori‬

PlanPhilly reported that the West Collection also is planning a temporary art installation at an I-95 overpass near the properties on Frankford Avenue.

Pieces from the West Collection currently can be viewed at the Kimmel Center and other public exhibition spaces, as well as at SEI's headquarters in Montgomery County. The West Collection website boasts loans made to galleries. like the Whitney Museum of American Art, Hirshhorn Museum and Sculpture Garden, Philadelphia Museum of Art, and others. You can also browse through some of the collection online.

The future home of the West Collection, 1115-27 Frankford Ave. in Fishtown.

The warehouses are within a block of neighborhood bars Barcade and Garage Fishtown, but have a long history dating back to the early 20th century. The space originally was a machine factory at the turn of the 20th century, then became home to the Otis Elevator Company until the 1940s.

According to Curbed, the building was nominated for a historic designation for its representation of Fishtown's industrial beginnings.