As a seminarian, Msgr. Federico Britto served on the altar during Pope John Paul II's Mass in Philadelphia 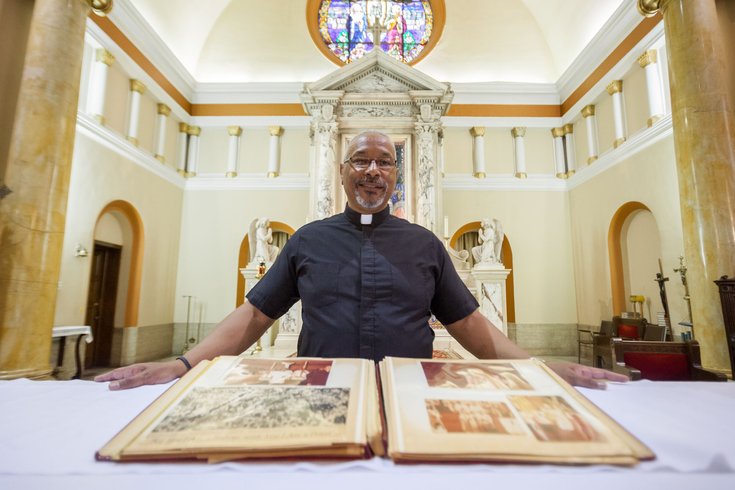 Monsignor Federico Britto keeps a worn scrapbook inside the rectory at Saint Cyprian Roman Catholic Church. Its red cover is no longer attached and the pages yellowed seemingly long ago.

But the images, depicting Pope John Paul II serving Mass on the Benjamin Franklin Parkway in October 1979, remain sharp — just as they do in his mind.

Britto led the papal procession as it paraded from the Cathedral Basilica of Saints Peter and Paul to an altar erected above Logan Circle. Serving as thurifer, the acolyte responsible for carrying the thurible, or container for burning incense, Britto stood near the newly elected pope as more than one million faithful gathered to celebrate Mass.

Britto was in his sixth year at St. Charles Borromeo Seminary when John Paul II visited Philadelphia as part of his much-heralded first trip to the United States.

The St. Charles ceremony crew was selected to serve Mass, providing Britto the rare opportunity to stand alongside the head of the Roman Catholic Church.

“That was the highlight of our seminarian lives, other than being ordained as a priest,” Britto said.

Britto documented the day in his scrapbook, filling it with magazine covers, newspaper accounts and various photos he collected. Several images feature him, including one picturing Britto waiting to greet the pope.

“He came by and he said, ‘You were the thurifer,’” Britto recalled. “That was it. Just for him to say that — he remembered me as being the thurifer. He couldn’t miss me. I was the only African-American.”

Britto not only recalls the images from the Mass, but he remembers the feelings he felt as a young seminarian — nervousness, enthusiasm and joy.

And, of course, Britto recalls the excitement felt not only by Catholics in the region, but other Philadelphians, too. He said he senses that same energy today, as Philadelphia prepares for the World Meeting of Families and another papal Mass on the Parkway.

“He was a superstar at that time,” Britto said of Pope John Paul II. “He related so well with young people and all sorts of people. There was a spirit about John Paul II that he reignited in the church.

“Pope Francis, today, is doing the same thing. There’s some kind of electrifying energy that he’s creating in our world today.” 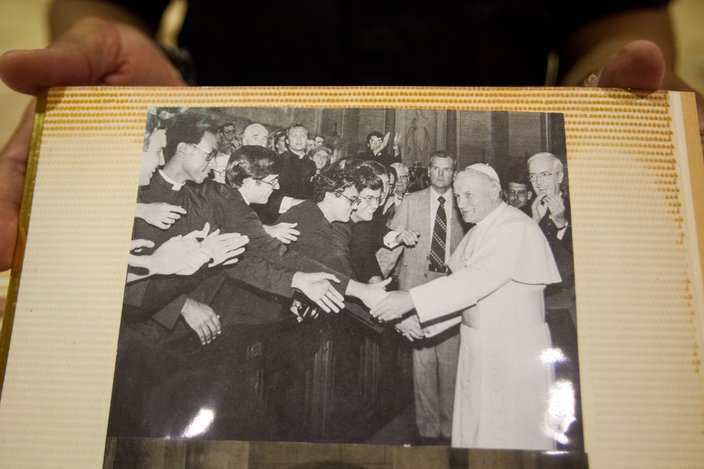 Pope Francis is expected to attend the Festival of Families on Saturday, Sept. 26 and celebrate Sunday Mass the next day. Both events will take place on the Parkway in front of as many as two million people.

Britto said the timing for Pope Francis’ visit and the World Meeting of Families could not be better.

Scars still remain from a sexual abuse scandal that not only rocked the Archdiocese of Philadelphia, but Catholics across the country. Attendance has fallen significantly, forcing the archdiocese to close or merge parishes and schools across the region.

Britto said he remains hopeful Pope Francis can bring healing and spark resurgence, noting many Catholics have returned to the church, citing the Jesuit pope as their inspiration.

“So many people were saying that ‘I like this pope. He’s very down to earth,’” Britto said. “He’s making an end way to a lot of people, whether they’re Catholic or non-Catholic. I think, whether he realizes it or not, God really is working through him and bringing God’s message to the people where they are.”

Britto sees the impact Pope Francis has had at his own West Philadelphia parish, where volunteers have prepared more than 1,000 rosaries for pilgrims attending the World Meeting of Families. The church’s initial goal was 500 rosaries.

Britto is not sure what his role will be when Pope Francis visits. But he is counting on another powerful experience brought by a man he described as a relational, charismatic leader.

“He’s down to earth, but at the same time a very spiritual, holy man — a humble man,” Britto said. “I think that is what the world needs to see today. They need to see signs of hope for their lives. I think this pope can do that.”