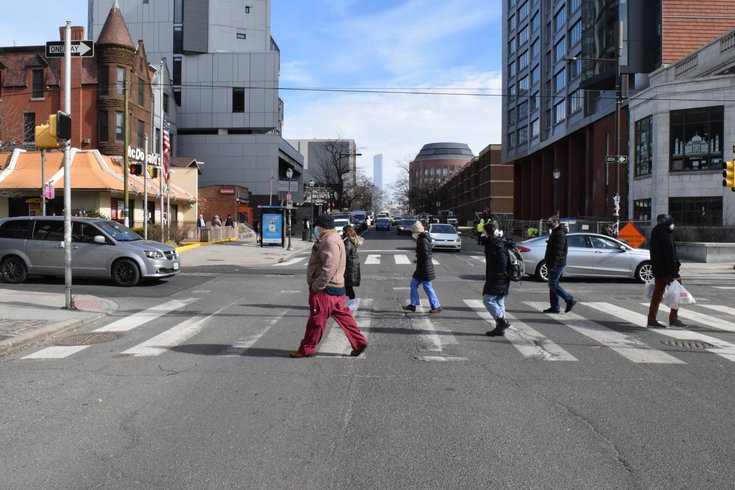 Philadelphia is redesigning a six-mile stretch of Walnut and Chestnut streets in West Philly in hopes of making the corridor safer for pedestrians, bicyclists and motorists.

Residents and business owners in West Philadelphia are being asked to provide feedback on proposals to improve traffic safety along a six-mile stretch of Chestnut and Walnut streets.

The Office of Transportation, Infrastructure and Sustainability unveiled a survey Wednesday where the public can suggest ways to improve safety for drivers, cyclists and pedestrians. But before weighing in, the public is urged to review the proposals.

Sections of both streets appear on the city's Vision Zero High Injury Network, which encompasses 10% of the city's roads, but 80% of car crashes.

Almost 700 crashes occurred along the six-mile corridor from 2015 to 2019. Eight of them were fatal. Plus, 186 pedestrians were struck by cars, according to the city.

City officials are pointing to the redesigned stretch of Chestnut Street from 34th Street to 45th Streets as a model for the project. The redesign created a parking-protected bike lane and decreased the number of travel lanes and pedestrian exposure.

After the redesign, 60% of pedestrians said they felt safer when crossing the street, according to the city. The number of speeding motorists declined by 47% and the number of people riding bicycles on sidewalks was cut in half. Bike-involved crashes were eliminated.

The city has outlined the following goals for the project:

City officials said they spoke to neighborhood groups, business organizations and other local stakeholders over the last several months to learn more about traffic safety concerns in the area.

The city also performed traffic analysis with the Delaware Valley Regional Planning Commission to find out what design options could work best for the neighborhood.

"The community in West Philadelphia deserves safe streets," Deputy Managing Director for Transportation Mike Carroll said. "We have taken the time to listen to people's concerns about traffic safety and want to continue to work together with the community to improve Chestnut and Walnut Streets.

"PennDOT’s repaving project next year gives us the opportunity to improve current conditions, change the layout, and ensure that this road works for all users regardless of whether they walk, bike, take transit or drive."

The survey must be completed by July 15. Residents and business owners also can submit feedback by texting or calling (215) 436-9886, or by emailing VisionZeroPHL@phila.gov.

The city also will host public meetings regarding the project on June 17 and June 29 at the Walnut Hill Community Playground and the Laura Sims Skate House. Residents and business owners can learn more about the plans and provide in-person feedback.

City officials will then review community input as they move forward with selecting a plan.

Engineering plans are expected to be developed by city and state officials in the fall, with the hope that the project will commence next spring. The project is being funded by the state.