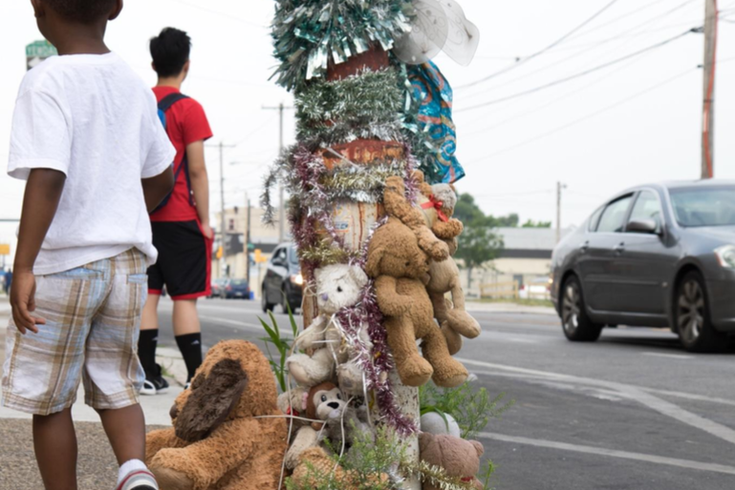 Philadelphia traffic deaths and serious injuries caused by crashes have been rising over the last two years, including a sharp increase in fatalities in 2020. The city unveiled updated plans this week to achieve its Vision Zero goals.

Philadelphia officials on Friday unveiled an action plan for the city's renewed commitment to Vision Zero, the multinational road safety framework that aims to reduce traffic fatalities and serious injuries to zero.

The plan, first formulated in Europe in the late 1990s, advocates for a combination of design and policy features that minimize roadway risks where different modalities — pedestrians, drivers and cyclists — interact in their travel.

Philadelphia adopted a Vision Zero plan in 2017, when Mayor Jim Kenney called for a variety of measures to improve road safety in the city. Over the past few years, that has included the installation of speed cushions, protected bike lanes, red light cameras and a large project to redesign high-risk roadways.

The goal the city set was to reduce traffic fatalities to zero by 2030.

The pandemic has shown that Philadelphia, and cities all over the country, were not prepared for a steep shift in transportation needs, and we, of course, hope the details in the city's 2025 Vision Zero Action Plan get enacted as soon as possible — Randy Lobasso, Bicycle Coalition of Greater Philadelphia

Though there have been areas of progress, the last two years have seen an alarming rise in serious injuries from crashes. In 2020, with roadways less clogged during the COVID-19 pandemic, traffic fatalities in Philadelphia have increased by more than 60% from last year, reaching 120 this year compared to 83 in 2019. Serious injuries rose from 244 in 2018 to 403 in 2019, according to the city's report.

"This year’s alarming spike in traffic deaths comes at a time when there are fewer cars on the road due to pandemic response – which has encouraged speeding and aggressive driving," Kenney said Friday. “Together with all of the challenges Philadelphians have faced this year, these tragic deaths make our Vision Zero efforts more important than ever."

The Vision Zero Action Plan 2025 and Capital Plan place emphasis on a "safe systems approach," which will focus heavily on reducing vehicle speeds in the city. A vehicle's speed is a crucial predictor of whether crash victims will survive.

Key targets of the updated plan include the following:

• Expanding the automated speed enforcement program to within a quarter-mile of all schools and High Injury Network streets, upon passage of state-enabling legislation

• Increasing the City’s bikeshare program, Indego, to 350 stations and expanding to new neighborhoods while ensuring accessibility and affordability for low-income riders

Randy LoBasso, policy director at the Bicycle Coalition of Greater Philadelphia, said the city is moving in the right direction by focusing on re-engineering road designs and automated enforcement, as opposed to aggressive police enforcement against bad behavior.

"We're devastated that the pandemic has created a more dangerous situation on our streets, and that the past three years of Vision Zero activities were not enough to have prevented what has occurred in Philadelphia, which is at least 120 people killed in traffic crashes in 2020," LoBasso told PhillyVoice. "The pandemic has shown that Philadelphia and cities all over the country were not prepared for a steep shift in transportation needs, and we, of course, hope the details in the city's 2025 Vision Zero Action Plan get enacted as soon as possible."

LoBasso added that the "safe systems approach" is more in line with the needs of a city like Philadelphia, which has different issues than those originally outlined in the Scandinavian countries where Vision Zero was born.

By managing risks inherent in the transportation system, the city can move toward eliminating the conditions that lead to deadly crashes.

A potential drawback to the city's strategy is that much will rely on action from the state legislature, which has stalled on measures deemed essential to Vision Zero's proponents. Senate Bill 565, for example, would permit PennDOT to intervene on state-owned streets to construct parking-protected bike lanes and pedestrian plazas.

"That legislation, endorsed by groups and governments from Philadelphia to State College, has been stuck in the state legislature all year and is being held up by one state senator," LoBasso said. "It's imperative that the Kenney Administration make it a high priority and build new coalitions to get the legislation it needs passed if they want to see their action plan become reality over the next three years."

Motorist advocacy groups have questioned the conclusions reached by early reports about the uptick in fatal crashes across much of the country in 2020. Some have suggested attributing this to vehicle speeds is "a lazy assumption" that furthers an agenda.

Mike Carroll, Philadelphia's deputy managing director for transportation, said the trend of rising deaths and injuries requires planning and action, even as this year's data continue to be interpreted.

"Although we know we cannot look at any one year of data in isolation – our trend toward zero needs to shift down in order to reach our goal of zero by 2030," Carroll said. "We knew zero by 2030 was ambitious – and we stand before you today to recommit to that goal, because we know our city and our families deserve safer streets."

The city outlined a list of actions taken since its first Vision Zero commitment three years ago:

• Breaking ground in 2018 on the two-mile corridor of American Street between Girard and Indiana avenues in the Northern Liberties and Fairhill neighborhoods. This project highlights the possibilities of reimagining a wide roadbed and re-allocating space to different uses. The project will be completed by the end of 2021.

• Planning 31 miles of upcoming projects on the High Injury Network in the next two years, including corridors like Washington Avenue and intersections like Broad, Germantown and Erie.

• Upgrading city fleet vehicles with side guards, 360-degree cameras and cross over mirrors.

• Reaching more than 250,000 people through social media and placing 1,000 ads on radio and outdoor media campaigns.

LoBasso said Philadelphia should design and regulate its transportation grid in ways that encourage compliance with laws, which in turn will keep everyone safer.

"Our goal has always been for the law to simply not be broken and communities to not be over-policed as Philadelphia moves toward zero deaths," LoBasso said. "The city's 2025 action plan is a positive step in that direction."