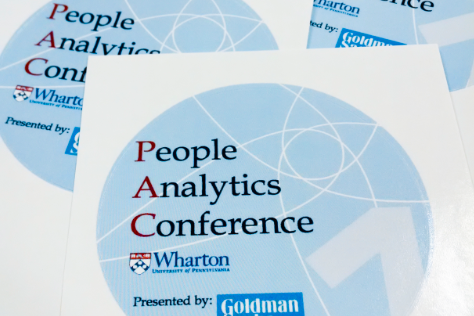 These stickers highlight the People Analytics Conference being hosted by the Wharton School.People Analytics are a data-driven approach to managing and hiring employees.

Data analytics have transformed everything from the way companies market their products to the way baseball teams field their starting lineups.
Now, that data revolution is advancing to Human Resources.
People Analytics — a data-driven approach to managing employees — is gaining traction among businesses as they re-evaluate the best ways to recruit, hire, promote, compensate and evaluate job performance.
Philadelphia will be at the center of the revolution beginning Friday, when the People Analytics Conference kicks off at the Ritz-Carlton Hotel.
More than 400 people are expected to attend the two-day conference, which is hosted by the Wharton School of the University of Pennsylvania. Representatives from Google, Facebook, JetBlue and LinkedIn will join educators from Harvard, Yale and Duke, among other businesses and universities.
“The conference is basically a clearinghouse of people who are working in this space,” said Lisa Donchak, a Wharton MBA student who helped organize the conference. “This is a super, super new field. There is a lot of research happening in a lot of places.”
Donchak was introduced to People Analytics while serving in sales analytics at Google, a company she described as the “poster child” of People Analytics.
Laszlo Bock, the head of Google’s people operations, is among the 40-plus individuals slated to speak at the conference.
Once known for using brain teasers during interviews, Google now takes a different hiring approach. Bock told CNBC that those responses did not accurately predict job performance.
“We were doing it the wrong way,” Bock said. “The better way is to ask structured behavioral interview questions where you say, ‘Give me an example of a tough problem you solved’ and then you walk that through with somebody. You have different interviewers ask similar questions. You get more than one answer and you can get a real calibrated sense of if a person is bright.”
One company that is sending a representative to the conference has developed a database of some 15,000 executive profiles. The company, ghSMART, is based entirely on People Analytics, but it does not use the computer-based metrics that some companies use.
ghSMART helps boards of Fortune 500 companies craft well-defined profiles for what the company needs in a chief executive officer or other high-level executives. Once a board has determined its finalists, ghSMART provides a detailed analysis of the candidates.
"We collect data through interpersonal connections, through discussions," said Michael Haugen, a partner at ghSMART's Philadelphia branch. "We do that because we’ve found the ability to get the data is based off the human ability to communicate. We have yet to find a signal tool that would be able to get that same level of data as a highly trained professional in this space."
ghSMART assesses candidates by gathering information from across their careers and calculating their capabilities, strengths and risks, then quantifying that information by rating the candidates on about 25 leadership qualities. Then, they help the hiring company make a selection by evaluating the top 10 strengths and risks of each candidate.
Donchak said People Analytics eliminates unconscious bias during the hiring process, leveling the playing field for underrepresented populations.
They help companies sort through hundreds of applications to find the best candidates, she said, providing a boost for qualified candidates who lack connections at a company.
“A lot of jobs are gotten through friends or friends of friends,” Donchak said. “The network advantage is hard to overstate. … If you don’t know somebody in that space or at that company, you’re almost at a disadvantage.”
Institutions of higher learning have long used a form of People Analytics, Donchak said, pointing to the use of grade-point averages and SAT scores to help determine college admissions.
“A lot of academic institutions, especially at the undergraduate level, deal with huge, massive volumes of applications,” Donchak said. “It’s hard to go through those applications in a way that is consistent and fair and makes sure everyone gets a chance.”