What they're saying about the Eagles: It's good to be king 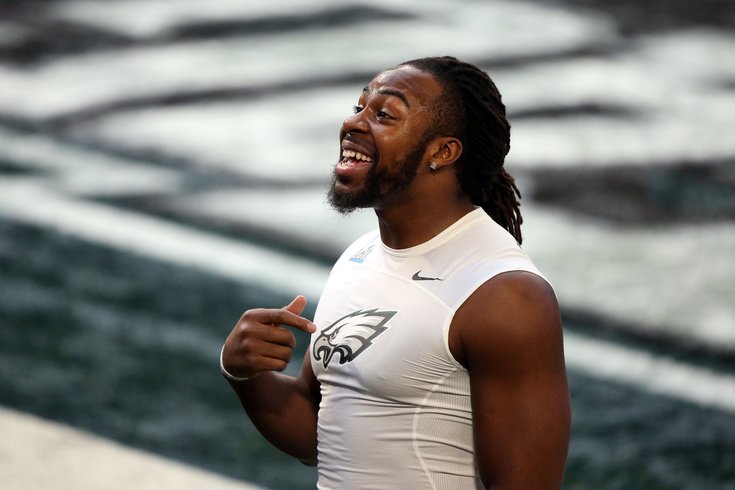 The Eagles' in-season addition of Jay Ajayi last year and the emergence of Corey Clement – not to mention Matt Jones and Josh Adams this offseason – could spell the end for Wendell Smallwood or Donnell Pumphrey ... or both.

Now that the winter sports (basketball and hockey) have officially come to an end, that can only mean one thing: It's football season!

Sorry, I'm being told it's actually baseball season first – but with the Eagles back at NovaCare this weekend for rookie minicamp, it's as good a time as any to check in on what's going on across Broad St., opposite from where the Phillies have emerged as a surprise contender for the N.L. East crown.

But today, we'll be sticking with the reigning NFC East (and Super Bowl) champions as they begin their quest for a repeat, which is going to be a lot harder than some fans seem to think...

The Age of the Eagles?

History doesn't bode well for an Eagles' repeat in 2018, but unlike other past champions, the window for this Birds team is just now opening. And failing to return to the Super Bowl this season hardly spells the end of what has the potential to be a franchise in the making.

With how many teams that have never won repeat superbowls, is there a strong belief that the Eagles actually make it back to the superbowl or finish lower (how much) and are they now a team to be at the top of the league for the next 5 or more years.

The New England Patriots were the last team to go back-to-back, in 2003 and '04. Since then, just two defending champs have made a return to February football. Only three teams advanced past the Divisional Round. Five missed the playoffs entirely...

So, yes, history is instructive. But, no, a recent history of the NFL does not provide us with clues into the fate of the 2018 Philadelphia Eagles.

What we do know is that they have impact playmakers everywhere and Carson Wentz appears to be on track for a Week 1 return. They also lost some key coaches, but Eagles fans should be in a place where they fully trust Howie Roseman and Doug Pederson. The Eagles have all the pieces in place to be an evergreen contender -- they have the potential to be in the back half of this decade what the Seahawks were in the front half. You couldn't ask to be in a better place as a football fan.  [nfl.com]

Too many horses in the stable

The Eagles lost their lead rusher from a year ago, LeGarrette Blount, to free agency this offseason, but they've added a pair of their own in Matt Jones and Josh Adams. They'll also return a pair of their own running backs in Wendell Smallwood and Donnel Pumphrey, who were both afterthoughts in 2017. Add to that Darren Sproles returning from injury, and something's gotta give...

It's a virtual lock that three of the spots at running back will be taken by Ajayi, Sproles and Corey Clement, the undrafted free agent last season who had 100 receiving yards in the Super Bowl.

That would leave Jones and Adams to compete for potentially one roster spot with Smallwood, the Wilmington native, and Pumphrey, who spent last season on injured reserve after having a poor training camp.  [delawareonline.com]

The most surprising cut here will be Donnel Pumphrey. After looking subpar in camp last summer, Pumphrey has an uphill battle to make the roster.  [theeagleswire.usatoday.com]

MORE: Aussie Jordan Mailata on learning football: 'Before I had one peanut, today I have two peanuts' | Source: Eagles DE Derek Barnett had surgery this offseason | It's a perfect scenario for Eagles rookie tight end Dallas Goedert

So you're saying there's a chance?

The Eagles made official on Friday the signing of 15 rookie undrafted free agents. Our friend BLG over BGN took a look at which UDFAs have the best chance to make the 53-man

In college [Reaves] played 49 games, started 36, and amassed 301 tackles, 20.5 tackles for loss, 9 forced fumbles, 30 pass break-ups and 8 interceptions. For a small school defensive back, above average ball production is a must, and Reaves checks that box...

Reaves still needs to shore up the mental aspect of his game, but his versatility, leadership, ball skills, dedication to the gym and film room combined with his aggressiveness as a tackler equal the potential for early special teams snaps and eventual third safety reps. His path to the roster is very clear and his arrival could force out veteran Chris Maragos if the coaching staff is impressed early.

Bonus points for his favorite subject being history and being a Meek Mill fan, that’ll play well in Philadelphia, the Meek Mill part anyway.  [bleedinggreennation.com]

Speaking of Eagles UDFAs, check out the pipes on offensive lineman Ian Park from Slippery Rock:

But wait, it gets better...

.@ianpark_ singing the @Halo theme song over the @Eagles winning the Super Bowl is 🔥 pic.twitter.com/3i3r2LDZJE

And, finally, just because Dallas Goedert is second on the Eagles depth chart to Zach Ertz doesn't mean you should ignore him when its comes time to draft your fantasy roster.

Who's this year's Kareem Hunt or Alvin Kamara: a midround pick with a lot of fantasy value?

Kevin Seifert, national NFL writer: Dallas Goedert, TE, Philadelphia Eagles. We all know how the Eagles use their tight ends. In two seasons under coach Doug Pederson, they have targeted tight ends an NFL-high 348 times. Goedert will get plenty of opportunities, and with long arms and a flair for dramatic catches, he is built to be a red zone star.  [espn.com]