What they're saying about the Eagles: NFC Championship edition 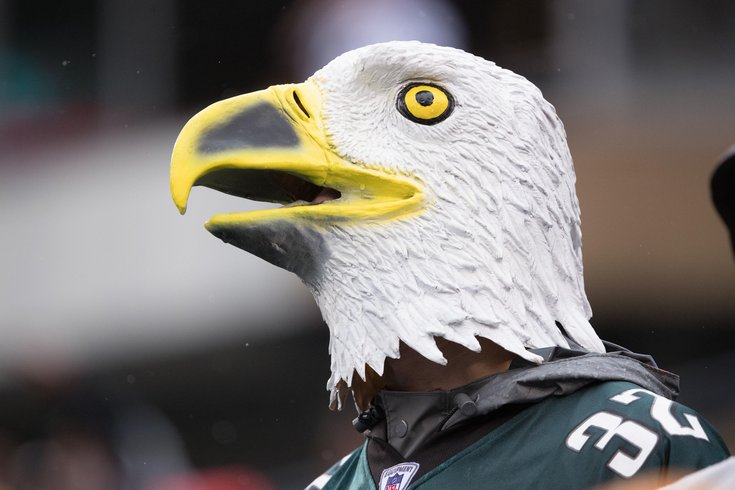 This Philadelphia Eagles fan should probably trade in his eagle mask for a dog one instead.

It's almost hard to believe that the Eagles are one win away from a Super Bowl berth, and even harder to believe that they've done so despite all the injuries they've faced this season, including the loss of starting quarterback Carson Wentz.

Once again, the Eagles will be home underdogs against the Minnesota Vikings, but the team – and the fan base – has embraced that role, so much so that when the Vikings run out of the tunnel and onto the turf at Lincoln Financial Field, they might be staring at a crowd full of more dogs than humans. And if the Birds can pull off another upset, they'll move one step closer to an all-you-can-drink post-Super Bowl party, thanks to a promise that Bud Light made without really considering its consequences.

However, they're not ready to banish the Eagles to The Pit of Misery. Not yet, at least.

We've looked at experts' predictions – and made our own – so let's take a look at some of the other things they're saying about the Eagles-Vikings NFC Championship, aside from who is going to win.

Who actually let the dogs out?

Ertz wrote a great piece for The Players' Tribune, and I highly recommend checking out the entire story. But the part at the beginning about how he first learned of Lane Johnson and Chris Long's plan to wear dog masks after the Falcons game is just excellent.

I’m sitting at the pregame meal on Friday night before the Falcons game, and it’s me, Lane [Johnson], Chris Long, Jason Kelce and Brent Celek. When you’re with those four guys, something’s always going on. Jason’s looking at me and Brent, kind of like a little kid who can’t contain himself, you know?

And so Lane kind of leans across the table all … what’s the word? I guess you’d call it conspiratorial, like it’s Ocean’s Eleven or something. And he’s like, “You know how everyone keeps saying we’re underdogs? Even though we’re the No. 1 seed? Well … we were on Amazon last night, and we ordered these dog masks.”

Before I can even think, like, What the heck are you going to do with a creepy dog mask? Lane says, “Yeah, and when we win, because we’re gonna freaking win, we’re going to do everything in the masks. Media. Postgame. Everything. Dogs.”

Despite the Eagles once again being underdogs, Brandon Gowton over at BGN is feeling confident and wanted to share that confidence with Eagles fans by offering up four reasons why he feels that way. The No. 1 reason? Head coach Doug Pederson.

I never would’ve expected to be saying this at the time he was hired, but I have a ton of confidence in Dougie P. You should too.

Pederson’s performance in the Eagles’ first playoff win was fantastic. Sure, the Eagles only scored 15 points. And you can nitpick about how he handled Jay Ajayi’s touches.

But the big takeaway should be that Pederson put together a strong game-plan and did a great job of play-calling. The Nelson Agholor handoff and back-to-back Ajayi screen passes were the standout calls.  [bleedinggreennation.com]

An arm and a leg

And if you want to get into the stadium on Sunday, it's going to cost you. Tickets for the NFC Championship are insanely expensive...

Just how expensive? Try the most expensive resale price ever on the secondary market for a conference championship game, according to TicketIQ.

Some of their stats around the tickets for this game, from Ticket IQ's Ralph Garcia:

A tough test for Eagles

I highly recommend checking out all of Fran's film breakdowns for the NFC Championship, but he took a close look at Vikings wideout Adam Thielen, and it's looking like the Eagles secondary is going to have its hands full.

Before last season, Thielen was a relative unknown despite the fact that he’s been on the Vikings since 2013. Coming out of Minnesota State, Thielen was undrafted and only got noticed thanks to his performance at a Regional Combine in Chicago that spring. That got him a tryout with his hometown Vikings, who signed him to a contract after the tryout. He spent his first season on the practice squad, caught eight passes in 2014, 12 in 2015, and then busted out in his fourth season last year. Now? Thielen is one of the best receivers in the NFL. It’s not because of his size or his athleticism or his leaping ability or top-end speed, but it’s because of how nuanced of a football player he is.

Shot 3 - #Vikings WR Adam Thielen is the real deal. #Eagles had a big test last week vs Julio, and while they're different types of players I think Thielen is arguably just as big of a test. Watch how well he gets off the line here vs press coverage. Technician at the LOS pic.twitter.com/eDmcO71kBv

Whether it’s getting off the line against press coverage, creating separation mid-route, or tracking the ball mid-flight, Thielen is a great receiver. He may not be Julio Jones from a physical standpoint, but I think he’s a similar type of challenge for the Eagles' defense as the focal point of the passing game for the Vikings. Whoever lines up against him on any given play will have to be at the top of his game.  [philadelphiaeagles.com]

This won't immediately impact Sunday's game, but it's certainly a bit of good news for Eagles fans. It's also a potential silver lining should the Birds, you know – actually I'm not even going to say it.

According to NFL Network's Mike Garafolo, the Eagles are pleased with how Wentz is recovering from his ACL surgery. They are expecting him to be the starting quarterback in time for the 2018 regular season opener in September.

"Carson Wentz is doing great early on in his recovery,' Garafolo said on NFL Network. "I talked to a couple of guys about that. Matter of fact, Chris Maragos, who is coming back from his own issue, special teams guy, he saw (Wentz) in the weight room last week. Like ‘hey, maybe you should take it (easy)."

"So he’s really pushing it early on his return. They’re confident he’s going to be back well ahead of Week 1." [via 247sports.com]

Just because Wentz isn't in uniform, that doesn't mean he's not helping his teammates any way he can.

Foles, who inherited the starting job when Wentz was injured, said he's using his injured teammate as an in-game asset. Wentz was providing tidbits throughout the divisional-round playoff victory.

“Yeah, we'll go over there ... it has always been Nate, him and I," Foles said. "The roles have changed, but we still talk, we still communicate, and that's something that's really special, and just to see his attitude and his heart throughout this whole thing, it's been amazing.

“You know, it's really cool to have him around and do this all together because our relationship in the QB room has stayed the same, and we continue to work together.”  [espn.com]