What they’re saying about the Eagles as training camp opens 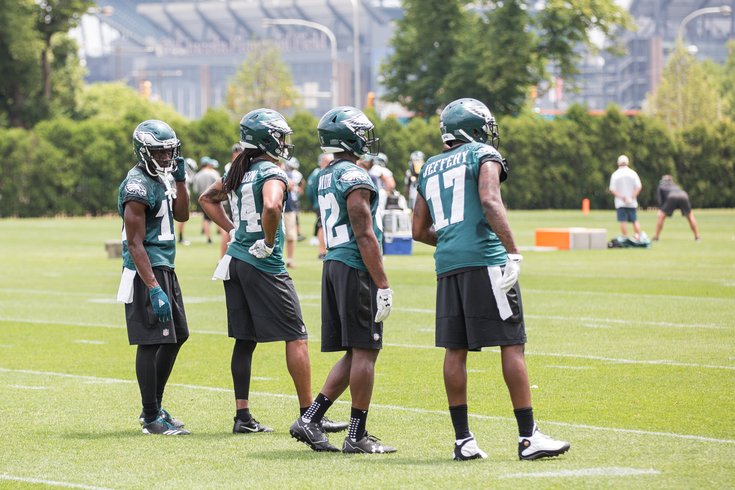 The Eagles still have work to do in improving their wide receiver corps, but they should be considerably better than they've been the past two seasons.

Football isn’t officially back yet, but the Eagles are taking a big step today. The Birds will open up their 2017 training camp on Monday at the NovaCare Complex as rookies and selected veterans will practice Monday morning.

We’ll have news and analysis from practice in a little bit, but here are a few Eagles stories from over the weekend.

I liked Orr’s creativity in deciding that the Eagles’ most important position battle is Nelson Agholor vs. the team’s patience:

I'm looking toward the bottom of the depth chart for this one. Agholor, a 2015 first-round selection by Chip Kelly, has been scattershot at best during his first two years in the NFL. He's received the standard offseason praise from head coach Doug Pederson, but at some point, the Eagles are going to either see tangible progress or cut the USC product loose. Pederson signed Torrey Smith and Alshon Jeffery this offseason in hopes of ramping up the receiving corps. There might not be room left for a project.

Gowton has some predictions for the 2017 Eagles season in here (playoffs!), but perhaps most interesting, he thinks Bears cornerback Kyle Fuller could end up in Philly:

Fuller was one of the six players the Eagles were targeting with their first round pick that year. Given their cornerback situation, I think the Eagles would like to take a chance on the 25-year-old if he shakes free. I don’t expect Fuller to be an instant lock-down corner for Philly but I still believe in his potential. He’s worth a shot.

Lawlor writes about the improved (on paper, at least) Eagles receiving corps and new position coach Mike Groh, who could be an interesting figure at training camp:

One of the things he mentions in there is that things are going to get tougher for the receivers in Training Camp. From an obvious standpoint, the pads go on and defenders can be physical with them. No more flag football, as Groh says.

There is also the point that the players will be competing for position on the depth chart as well as roster spots. This competition will bring out the best in some guys, but will cause problems for others. DGB already showed he couldn’t handle increased competition in the spring.