What is Jeremy Maclin's value? Tim McManus of Birds 24/7 went out and asked NFL "money guy" Joel Corry  what kind of contract Maclin should expect on the open market. Interestingly, Corry thinks old friend Andy Reid could make a strong play for his former wide receiver.

"It's got to be somewhere between Greg Jennings and Dwayne Bowe," said Corry.

"He's a $10 million per year receiver based on what he did," said Corry, who believes Maclin will net at least $20 million guaranteed. "You want to say his numbers are inflated by the system? Yeah, you could say that to a degree. But what can drive it more than anything else, and I can't stress this enough, is having a viable alternative."

That alternative, Corry believes, lies in Kansas City. The Chiefs have not received adequate returns on their Bowe investment, and the Chiefs went the entire season without a touchdown from their wide receivers. Andy Reid might very well be in favor of making a reunion with Maclin happen.

Here is a list of the top free agent wide receivers, with their 2014 numbers included: 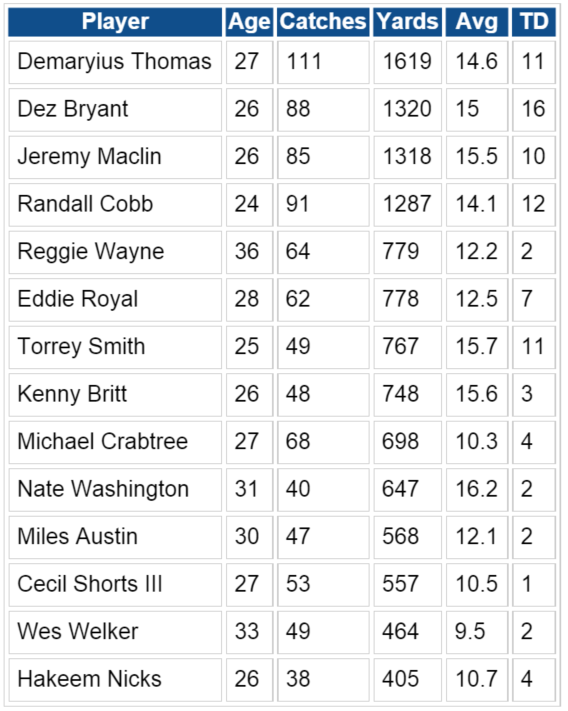 McManus correctly identifies Demaryius Thomas and Dez Bryant as a pair of receivers who are unlikely to ever see the open market, as their respective teams would use the franchise tag on them before they ever had the chance. I might even include Randall Cobb to that mix, who is only 24 years old, already has over 3000 career receiving yards, and is on a team that doesn't have any other players heading into free agency worthy of the franchise tag. That would make Maclin by far the most attractive player on the open market, and there seems to be a team every year that wildly overpays for a wide receiver.

If the Eagles cannot retain Maclin, they basically have slot receiver Jordan Matthews, and then what? Wide receiver would arguably become just as big a need as the defensive secondary.

If you're looking for a great free agency reference, here's Rotoworld's free agent list, where they rank each player by position.

Other Eagles news, notes and analysis from around the web:

1. My biggest question out of this whole Eagles front-office restructure is just what exactly will Howie Roseman do now? The press release the Eagles sent out on Jan. 2 listed five areas that Roseman would focus on now that he’s been stripped of all personnel responsibilities: 1) Directing contract negotiations, 2) Salary cap management, 3) Handling NFL strategic matters, 4) Overseeing the team’s medical staff, 5) Overseeing the equipment staff. So let’s look at those five areas. Although Roseman is correctly credited as a very good contract negotiator and salary cap manager, these are duties that have been carried out in recent years quite capably by Eagles director of football administration Jake Rosenberg, Roseman’s top assistant. Roseman doesn’t do most contracts anymore and hasn’t in a while, and Rosenberg is a very good cap guy. Roseman felt like he long ago outgrew doing contracts. Hard to imagine he’ll go back to them.

JimmyNote: According to a source with knowledge of the team's front office structure, Rosenberg's role will indeed basically remain the same.

"While Sproles was the only Eagles player to make PFWA's All-NFL team, four players made the All-NFC team: offensive tackle Jason Peters, outside linebacker Connor Barwin, defensive end Fletcher Cox, and the aforementioned Sproles. Peters also made the All-NFC team in 2013."

"Taiwan Jones/LB/Michigan State -- When breaking down the linebackers at the Shrine Game there's Taiwan Jones and then there's everyone else. Right from the initial drill, it was easy to see that Jones, 6-3, 250, is head and shoulders above the rest. He's quicker, more athletic and more explosive but Jones also displayed instincts and discipline during scrimmage. There's a good chance Jones' play here in St Petersburg springboards him to the Senior Bowl next week."

#UncleJimmyStoryTime: I attended the Shrine Game week of practices two years ago, which is held in the Tampa area. The Shrine Game has lower tier prospects than the Senior Bowl, but the weather is 81 degrees and sunny every day, or at least it was when I was there. I have two memories from that week. The first is that it was the week the Eagles hired Chip Kelly. The other memory is completely embarrassing.

After practice wrapped up one day, there were two media guys taping a segment on the side of the field, and one of them said something to the effect of, "So once again, in case you missed it, the Eagles have hired Gus Bradley to be their new head coach." So I immediately thought, "What the hell? When did that happen?" The media guys were legit NFL insider-types, and completely trustworthy with news.

At the time I had an NFC East blog, so if news broke and I was way late on it, I had Cowboys, Redskins, and Giants fan followers, so I'd still just put it out there on Twitter in case they hadn't seen it. I posted something to the effect of "I'm way late on this, obviously, but in case you hadn't seen it, Gus Bradley is the new coach of the Eagles." Around then I had about 10% of the Twitter followers I have now, so it was abnormal for my phone to blow up with dozens of retweets every 10 seconds, but that was what was happening, along with people replying, "By 'late on this' do you mean 'breaking?'"

As it turns out, the two media guys were not reporting on actual news. They were doing several takes on what might happen, much like the Saturday Night Live bit in which Tom Brokaw (played by Dana Carvey) runs through ridiculous scenarios in which Gerald Ford might die.

That tweet was only up for about a minute, but that was by far my biggest journalist screw up.