What they're saying: Chip hates stars 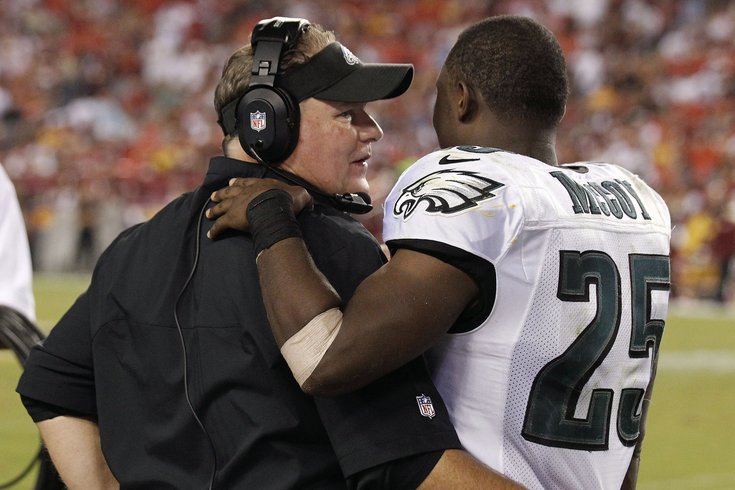 LeSean McCoy has spoken a few times since the Eagles traded him to Buffalo, but a member of the Philadelphia media hadn't gotten their mitts on him until the Inquirer's Jeff McLane did so on Tuesday. McCoy told McLane that he doesn't think Chip Kelly respects "stars."

McCoy said he heard Kelly say to reporters that money was the primary factor. He said he heard Eagles owner Jeffrey Lurie say that Kelly thought his shifty running style wasn't ideally suited to his offense.

He has another theory.

"I don't think he likes or respects the stars. I'm being honest," McCoy told The Inquirer on Monday. "I think he likes the fact that it's 'Chip Kelly and the Eagles.' "

Naturally, anyone who read that pointed out the ridiculousness of that statement the way it appears in print. Obviously, Kelly would prefer great players to good ones. However, it was the final two paragraphs of McLane's piece that kinda-sorta shed more light on what McCoy was trying to say when he meant "stars."

"Now you've got DeMarco. I think he's a good player," McCoy said. "But then you've got [quarterback Sam] Bradford. He's in and out, banged up. The main wide receiver is [Riley] Cooper. The tight end is [Brent] Celek. . . . [Kelly] likes it like that. The tension - the this or that - he doesn't like that. He don't like the way you dress.

"He's not the bad dude everybody makes him out to be. He's just different. But I don't really have any hate for him. I really don't. In the beginning I did, but I don't. If I see him I'll speak to him, respectfully - 'How are you doing, coach? Good luck.'"

I can't find my Shady decoder device at the moment, so I'm not sure exactly what he means, but I think I agree with his overall unclear point.

...if that makes any sense.

This is an awesome read. Here's Stuart's explanation for the heat maps he created:

I looked at all running backs with at least 100 carries in 2014, and then measured on what percent of their runs did each running back gain at least 0 yards, at least 1 yard, at least 2 yards, etc., up to 10 yards. I also calculated the percentage of runs that went for at least 15+ and at least 20+ yards.

Here's a comparison of Murray to McCoy:

It's also interesting to look at Frank Gore, who the Eagles targeted in free agency. His heat map looks an awful lot more like Murray's than McCoy's:

Be sure to read the post in its entirety -- It's well worth the look.

After bench press and before on-field workouts, an Eagles scout went the extra mile and asked linebacker Yannik Cudjoe-Virgil if he could measure the circumference of his knees, ankles and wrists, a Chip Kelly special. The against-the-grain procedure reminded me of a scene from another pro day: Kelly at Michigan State, where he spent a half hour away from the action chatting with white-bearded department of psychiatry professor Dr. Lionel Rosen, a favorite of Spartans football players who does some work for Kelly. (Neither would share the specifics of their conversation.)

This is a good read by Klemko, who details the craziness of the build-up to the NFL draft, and included some mentions of the Eagles. To note, the Eagles openly measured the circumference of prospects' knees right on the field after Senior Bowl practices in 2013 and 2014, which they stopped doing in 2015, probably because clowns like me were snapping pictures of it. Here's a picture of the Eagles measuring the knees of former Georgia Tech CB Jemea Thomas: 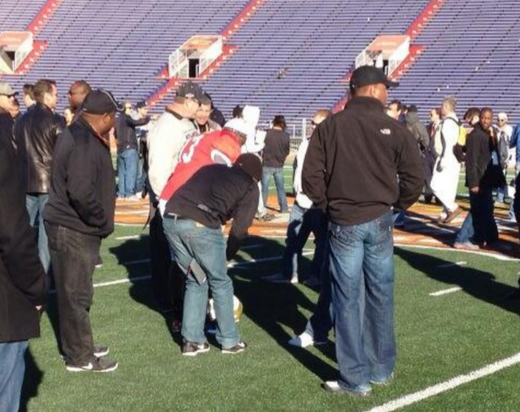 How many Eagles scouts does it take to measure a football player's knee? Six, apparently.

Anyway, the purpose of it is to determine how lean the prospect is, which helps the Eagles figure out how much weight the player can carry. Knee measuring, of course, will eventually lead to the Super Bowl: 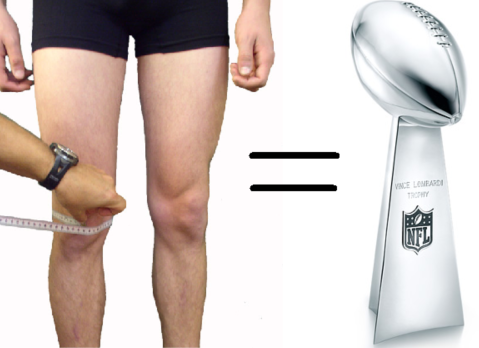