Chip Kelly's Oregon Duck bias is extreme, but common: A look at some other NFL-college biases 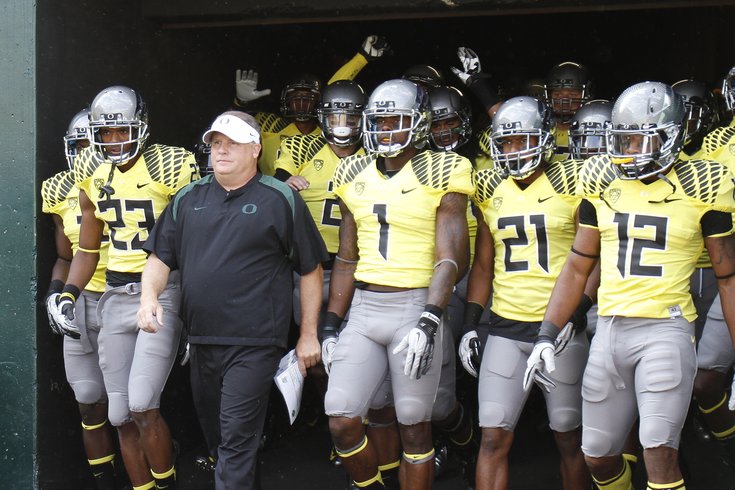 Chip Kelly leads his Oregon players on a cross-country walk to Philadelphia.

As we all know by now, if you played at the University of Oregon, there's a pretty good chance Chip Kelly is going to draft you, trade for you, or sign you off the street. He is then going to make up the guest bedroom all nice and sweet for you and let you live with him.

The Eagles "only " currently have eight former Oregon Ducks on their roster (they've had more), all of whom Kelly brought in since he became head coach a little more than two years ago. That doesn't even count Jeff Maehl, who is an exclusive rights free agent, and is likely to be back with the team. The Eagles' eight Ducks account for 23.5% of the total number of former Oregon players currently on NFL rosters.

However, while Kelly's #DuckBias is extreme, it is also fairly common in the NFL. There is absolutely evidence that many other teams have similar college biases.

Let's look at each of the above red teams individually:

• Patriots (5 Rutgers players): Bill Belichick admitted he has a Rutgers bias during the week of the Super Bowl, via Ryan Dunleavy of the Asbury Park Press:

"I think when Coach Schiano was there, he did a great job of building a program and having guys in his program that were similar to the type of people that we look for in ours," Belichick said in front of a NFL Network television audience on Super Bowl Media Day.

• Bengals (5 Alabama players, 5 Georgia players): Marvin Lewis has a long history of drafting SEC players, as noted by Coley Harvey of ESPN. Since he took over as head coach of the Bengals, 29 out of his 108 draft picks (just under 27%) have been from SEC schools.

• Seahawks (4 Wisconsin players): Seattle GM John Schneider grew up in Wisconsin, and was part of the Packers' front office for 12 years. All four Wisconsin players on the Seahawks' roster were acquired under Schneider's watch.