What do you miss most about Philly's recent past? 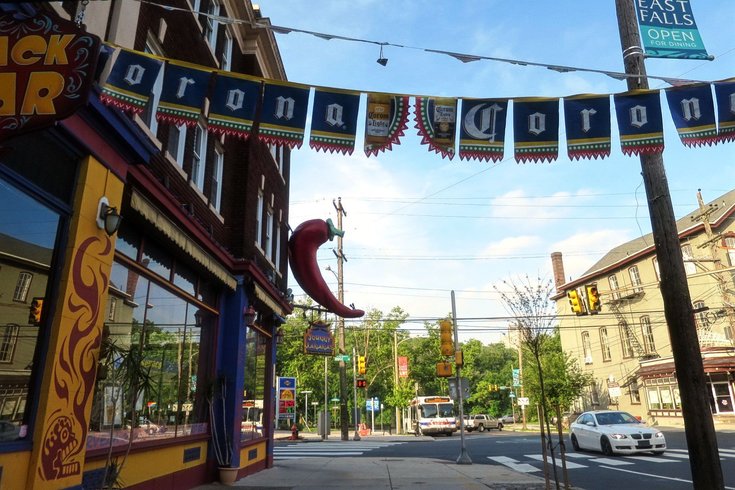 The enormous chili pepper on the facade at Johnny Manana's served as a sign that residents and visitors were in Philadelphia's East Falls neighborhood. It was recently taken down as the restaurant closed.

It’s been more than a year since Johnny Manana’s restaurant closed its doors for the last time in East Falls, clearing way for a future LeBus bakery to the corner of Ridge and Midvale avenues.

Full disclosure: I hadn’t been in Manana’s but for a few times in the years leading to its demise. Still, having lived in that neighborhood for a dozen years, the restaurant served as a welcoming signpost.

It told passersby that they were in East Falls.

It assured residents that they were, in fact, home.

It was a perfect object to include while giving visitors directions to your home.

And it was all because of the huge red chili pepper that adorned its façade.

As well she, and the neighborhood, should be. 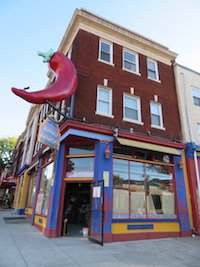 When Johnny Manana's closed its doors in East Falls, it was only a matter of time before its trademarked 'chili pepper' was taken down. A LeBus bakery will soon open in its place.

But when I drove by the other day, I mourned the noticeable absence – a process that those who loved the King of Jeans sign and Shirt Corner/Suit Corner aesthetic in Old City also faced.

Spurred by a totem which was removed in late November, I also got to thinking about other places from Philadelphia’s recent yesteryears that went extinct thanks to the never-ending churn of aesthetic evolution.

Some of these have popped up in our “Then and Now” series. Others have not.

I’m going to share my top seven from my lifetime. (Since I wasn't alive in 1781 when the Tun Tavern, where the U.S. Marines were born, burned down, it can't be on this list ... though it would have been.)

Those who forget their past are doomed to, well, forget things that they used to see everyday or something like that.

With no further ado, seven things that disappeared from the Philly landscape in recent years... 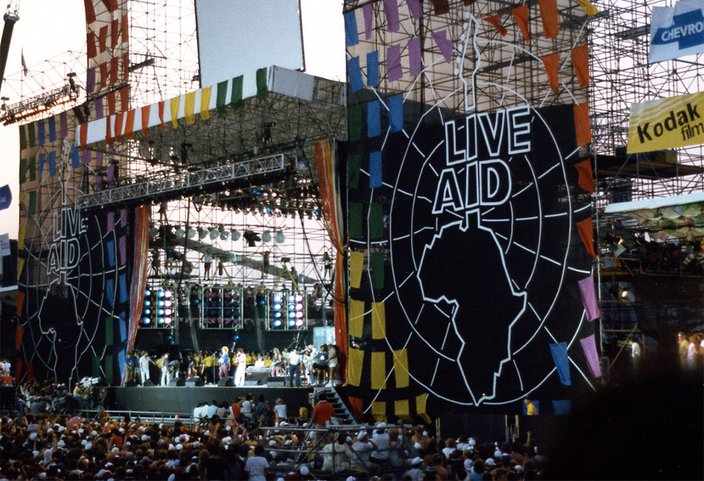 Live Aid was held in July 1985 at John F. Kennedy Stadium in Philadelphia. The open-air, horseshoe-shaped venue was knocked down in 1992 to make way for the arena now known as the Wells Fargo Center.

7. Stadia. I remember seeing Jerome Brown walking up and down the steps of JFK Stadium as Buddy Ryan’s Eagles held a pre-season practice at the stately old stadium that hosted Live Aid.

I remember Islanders goalie Billy Smith marching toward my seat in the old Spectrum after young me had yelled some unsavory things at the volatile player.

I also remember seeing a man in a Giants jersey laying on the ramp that lead to the 700 Level at Veterans Stadium, his jeans soaked in what was likely urine.

Glorious times and places they were.

Sure, the new sporting facilities are nice, but they don’t offer that sort of grit, oh no they don’t.

6. R1-R8. Yes, we’re talking Regional Rail line names here at a time when SEPTA is transitioning away from using tokens, which will also be missed. It just felt so unnecessary in 2010 to move away from the R naming system to the names of destination points. I mean, sure, it made sense in a way, but it also felt like change for change’s sake, no?

5. Repairing infrastructure is always a good idea. Just seems like PennDOT would’ve been well-served preserving the “Scary Baby Bridge Mural” to frighten future generations as it did mine.

4. Club Maui. This erstwhile nightclub formerly located at 1143 N. Delaware Ave. serves as a stand-in for the vibe of the entire Delaware Avenue club scene of decades past. Maui came to mind first because it hosted an any-coin any-drink night and the rough-and-tumble decadence it created was epic.

Twas sad to read this excerpt from a 2016 story about the property going up for auction: the “only remnant is a few patches of aqua floor tile.”

Pour one out for Maui, homies.

3. The Forum. First things first: I never set foot inside The Forum pornographic movie house on the 2200 block of Market Street. But knowing it existed in such a prominent Center City location meant the world to me insofar as it represented Philly’s seedy underbelly.

2. LOVE Park. PhillyVoice photographer Thom Carroll just told me what he misses most in Philly is “the downtown skateboard/BMX culture of the '90s and early 2000s."

The epicenter of that activity? LOVE Park.

Listen, I know they say the redevelopment of that Center City green-and-asphalt space will make it look prettier. But I prefer to remember the place where I proposed to my future bride, with the big round fountain in the middle and the trademarked LOVE statue on its since-replaced stand.

Nothing gold shall stay, but we'll always have Charlie Kelly and Sweet Dee having been there in an episode of "It's Always Sunny in Philadelphia."

1. The Gallery food court. When I was a little kid, one of the joys of South Jersey suburban life was hopping on the PATCO Speedline for a trip to Philly. Sometimes, there were parents; other times, we told those adults that we were playing somewhere in Westmont while actually heading across the bridge to cruise the Gallery. A whole new world, that place was; it was even termed “The Ghetto Downtown” in a book called “The Cosmopolitan Canopy.”

It offered a mega-mall and a glimpse of most walks of life in Philly under one roof. But then came 2015 and the place was shuttered so it could become some sort of hoity-toity shopping district.

I yearn for the past, particularly the sights, sounds and (good and bad) smells of its Food Court. I’m clearly not alone in that sentiment either.

RIP, Gallery Food Court. You will be missed.

Did we miss any? Well, feel free to chime in with suggestions of your own via Facebook, Twitter or email.