Where to view fireworks in New Jersey on New Year's Eve

Find times for each show in this roundup 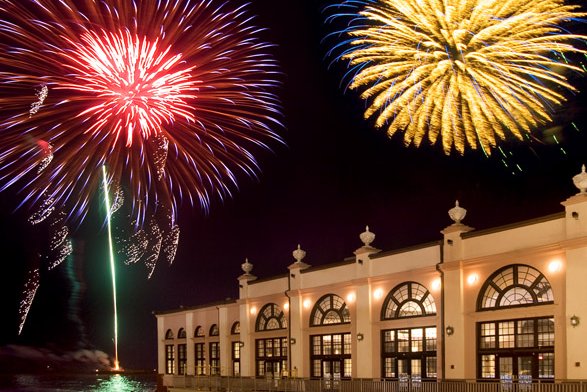 Haddonfield and Ocean City are ending their First Night celebrations with a bang, while Atlantic City and Sea Isle City will launch fireworks from the beach.

Those in Camden will be able to view fireworks over the Delaware River Waterfront.

Find times for each show in the roundup below.

To end the year, there will be two free fireworks shows over the Delaware River Waterfront, sponsored by SugarHouse Casino.

Catch a show at 6 p.m. and at midnight. In Camden, N.J., view the show from Wiggins Park or Adventure Aquarium.

Watch Tropicana Casino and Resorts light up the sky with a stunning fireworks display on New Year's Eve at 9 p.m. The show is free to watch from the Atlantic City Boardwalk.

At 9 p.m., fireworks will light up the sky on Kings Highway East.

The show is part of First Night in Haddonfield, N.J.  The family-oriented and alcohol-free New Year's Eve party runs 5 p.m. to midnight. Admission is $15. The evening features a full lineup of entertainment for all ages. There will be magic, music, comedy, dance and theater.

Ocean City, N.J. is also throwing a First Night party from 4 p.m. to midnight with family-friendly performances. Admission is $20. To end the event, fireworks will be launched from the beach between Fifth Street and Sixth Street.

The best viewing spots will be from the beach and boardwalk on either side of the block.

Head to JFK Boulevard's beach for a free fireworks show at 8 p.m.