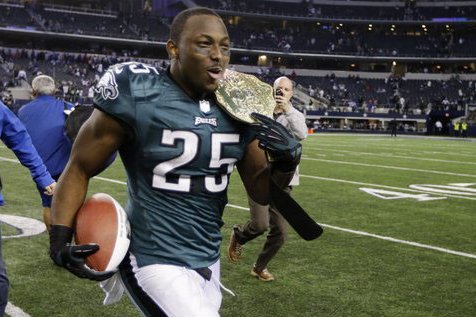 For years, many considered Concrete Charlie -- former Eagles linebacker Chuck Bednarik -- the greatest living Eagles player. But that all changed last month when the hall-of-famer passed away at the age of 89, leaving a void in the hearts of those lucky enough to have watched him play.

In addition to Bednarik, the debate for the franchise's all-time greatest player would undoubtedly include names like Brookshire, Brown, Van Buren, and White. Unfortunately, some of the greatest Eagles players are no longer with us, and in the wake of Bednarik's passing, there is no consensus as to whom should replace him as the franchise top player.

With that in mind, we've decided to take a look at some of the greatest living Eagles, the kind of guys Jeff Lurie would want to trot out before a big playoff game -- if/when that time comes -- to help get the fans fired up.

HOW HE GOT HERE: The Eagles drafted McCoy (Pitt) in the second round (63rd overall) of the 2009 NFL Draft. He was immediately inserted into the lineup (although he started just four games his rookie year) due in large part to the decline of Brian Westbrook, who was playing in his final year with the Eagles. McCoy failed to eclipse the 100-yard mark in any of his games, but he lead the team in rushing with 637 yards on 155 attempts. Furthermore, McCoy had double-digit carries on only half of his games that season, over his next five seasons with the Eagles, Shady would have at least 10 carries in all but three* games.

HOW HE LEFT PHILLY: McCoy was traded by Chip Kelly this offseason to the Buffalo Bills in exchange for linebacker -- and former Oregon Duck -- Kiko Alonso, who is coming off ACL surgery after a promising start to his career. Many fans' initial reactions [NSFW] fell somewhere between the anger experienced when Dawkins walked and the confusion felt when the team cut star wideout DeSean Jackson.

By now, fans are adjusting to the fact that life under Kelly's rule is much different than it was under Andy, or any other coach for that matter. Look no further than what the team did at the quarterback position this offseason.

Once fans came to the realization that McCoy's contract had been eating up such a sizable portion of the salary cap -- or once the team signed DeMarco Murray and Ryan Mathews as his replacements -- things seemed to settle down. However, McCoy didn't do much to help himself, as he began taking shots at his former team almost immediately upon his arrival in Buffalo.

First, McCoy said it "felt good to be appreciated" at his introductory presser with the Bills. Then, he had the following to say about his former team, and specifically his ex-coach:

"I don't think he likes or respects the stars. I'm being honest," McCoy told The Philadelphia Inquirer on Monday about Eagles head coach Chip Kelly. "I think he likes the fact that it's 'Chip Kelly and the Eagles.'"

"It was 'DeSean Jackson -- a high-flying, take-off-the-top-of-the-defense receiver.' Or 'the quick, elusive LeSean McCoy,'" McCoy said. "I don't think [Kelly] likes that."

WHAT HE LEFT BEHIND: It's hard to tell just what McCoy's legacy will be as an Eagle. Had he stayed in Philly through the entirety of his prime -- meaning the next couple of years -- he would be far and away the leading rusher in franchise history and his case for greatest living Eagle would be among the strongest out there. It's still a damn good resume, however the fact that he is currently on another roster coupled with the sour grapes he found in Buffalo will likely hurt his chances.

SIGNATURE MOMENT: In just six* short years, three of which ended without a postseason birth, McCoy had his fair share of memorable moments. There were a few (off-field moments) he'd probably like to forget -- like the party bus incident, the Twitter beef with his baby mama, and the whole 20-cent tip thing -- but for the most part, Shady was a fan favorite throughout his Eagles career.

*The Eagles failed to win a playoff game during McCoy's entire Eagles career.

There was the time he ripped a Redskins flag out of a fans hands before a game at the Linc. Who knew he was so ahead of the curve when it came to being a political activist?

Or the time he won the rushing title and had a WWE-style championship belt over his shoulder during the postgame interview:

uhh, LeSean McCoy? RT @KingJames: Who do i need to talk to to get one of those World Championship Belt? WWE belt pic.twitter.com/wDtNiwPY8S

And then there was the 2013 Snow Bowl, where McCoy set a franchise record with 217 yards and two touchdowns as the Eagles stormed back in the second half to beat the Lions, 34-20, thanks to 28 fourth-quarter points. The win went a long way toward helping the Eagles reach the playoffs in Kelly's first year as head coach.

Perhaps the best thing about McCoy was that every time he touched the ball, there was a chance you were going to see something you've never seen before. Here are some career highlights:

FULL STORY AND VOTE: WHO IS THE GREATEST LIVING EAGLE?