Why do peaches have fuzz?

Georgia may have the reputation, but Pennsylvania is a better grower of this fruit judging by last year's harvest 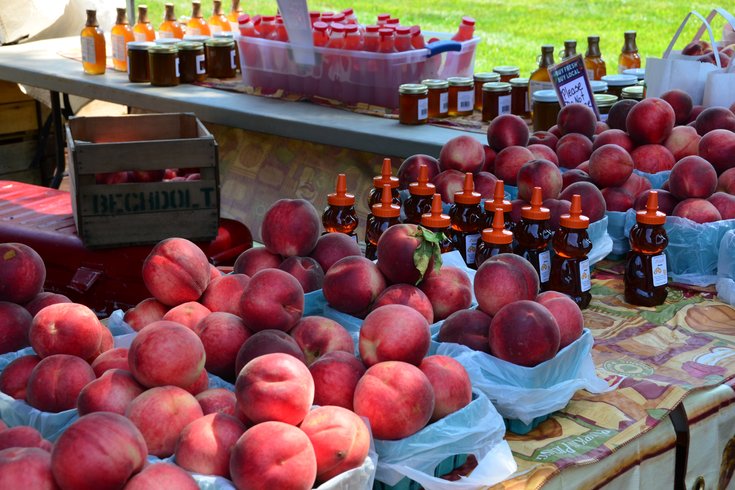 The Peddler's Village Peach Festival is held in August.

Peaches just might qualify as the most adorable of all the fruits, coated with a soft, uniform layer of fuzz on their skin that tickles the fingers.

But why does that fuzz exist, anyway?

Curious, we reached out for answers from Evan Gentile, executive chef of Earl's New American at Peddler's Village, which will host its annual Peach Festival Aug. 11 and 12.

Why do peaches have fuzz?

It’s usually to protect against bugs. The thicker, outer skin and everything—if a peach doesn’t have fuzz, it’s pretty much considered a nectarine. It’s nearly the same thing, it’s just missing the one genetic DNA out of it.

What is the ideal climate or environment for growing a peach?

You’ll want slightly warm weather. California is a prime example. You’ve got the hilly areas, with proper drainage, and good water in the environment—if you don’t have that much rain, it’s [not great for the peaches]. If you have a bad season, it’s too hot out, the peaches aren’t getting enough moisture to them, you’ll be harvesting later in the season if that does happen.

What has that meant for this season’s crop of peaches?

This season should be good. Around Pennsylvania, we’ve been getting a lot of rain. You don’t want too much rain, though, because it can damage the crop and ruin it.

What is, theoretically, so special about a Georgia peach?

[Laughs] It’s funny you say that. They’re known for their peaches and everything, but they’re not No. 1 on it. They’re the state fruit and all that, but California, even Pennsylvania, looking at last year’s harvest, we were able to outgrow them.

• Peaches have fuzz as a protective measure against bugs and other elements.

• Peaches are closely related to nectarines.

• Peaches are originally from China.

• Georgia is not actually the country's biggest grower of peaches.

And there are different varieties of peaches. What’s the difference between a white and yellow peach?

A white peach will tend to have more of a firm flesh. A yellow peach will be more juicy, a little bit softer, usually.

Browsing the supermarket can be daunting. You almost need to be peach-literate to know what you’re looking for, yes?

It is daunting. Usually, it depends on the year. You’re not going to have the same white peach from year to year—it all depends on the harvest. You just have to look at the peaches, is what my best judgment is. You’re looking for firmness, but it has to have somewhat of a give to it. The crease in the peach is also a good indicator of how sweet the peach will be – how much sugar it has. There’s always going to be a little give and take. There’s going to be a little too wet of a season and find your peaches aren’t quite as sugary, or they’re really hard or something, there’s always going to be those gives and takes.

It all depends on the breed, how it’s been raised and handled. Somebody might be able to sell you the ‘best’ peach, but you’ve got to be able to look at it and taste it.

Does color have any bearing on a peach? How red, orange, yellow…

You’re looking for a good combination of both. You want some red, some yellow—a distinct yellow, a distinct red. You don’t want any blemishes on it, dark spots on it, for the most part. It will happen every so often; it shouldn’t be something you shrug off and say, ‘This is a bad fruit,’ but it’s something to consider.

How should you store peaches?

I try to keep them in a dry area, and moisture will have a play with them because they’ll speed up the process of deterioration...A cool, dry area. My family goes down to Georgia and on the way back, they’ll go to Abbott Farms and get peaches for $90 per case, and they’re really nice peaches.

I like grilling them. Some of the things we’ll do at the peach festival, we’ll do specialty drinks and stuff like that, but one of our entrees I like the pork tenderloin we’ll be doing with our cheddar grits, and it will be served with sautéed spinach and a peach compote with it. You get the yin-yang of sweet and salty.

Any other fun facts?