When random acts of kindness are treated like oddities, you know we're in a bad place 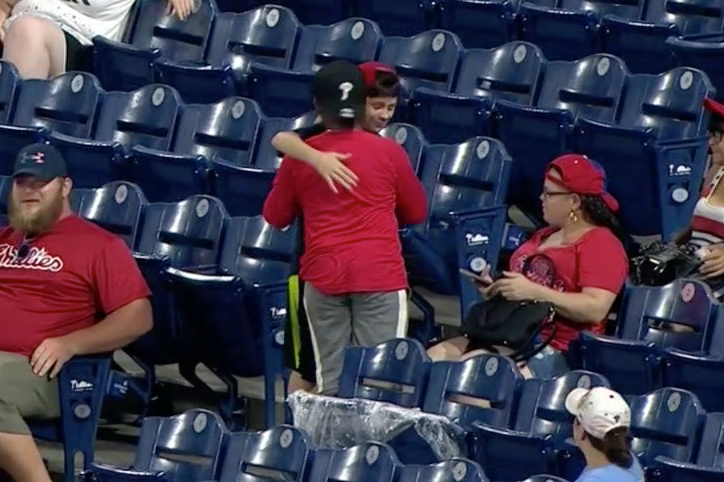 The Phillies may have lost 7-2 against the Dodgers Wednesday night, but it wasn't all bad — thanks to an adorable moment between two young fans that was caught on camera.

If, like most people in the world, you didn’t wait out the rain delay and watch Wednesday night’s Phillies/Dodgers game, you likely didn’t see an uncommon act of kindness transpire live in the fifth inning.

But chances are you’ve seen it by now, the moment when a young man chased down a foul ball and – without a moment’s hesitation – hand it to another young fan, who repaid this act with a grateful hug. (Check out Virginia Streva's post about it if you haven't yet!)

It was a heartwarming moment. If it didn’t bring a smile to your face, your ticker is smaller than the Grinch’s before it grew three sizes that one day. It deserved our attention, and not just because it was the bright spot in what would become another Phillies loss.

Still, it also serves as a reminder of how far our society has fallen.

The exchange happened right around the same time people – nay, angry, xenophobic, fear-mongering bigots – chanted “send her back” – a message to a Somali-American U.S. congresswoman – at a Trump rally in Greenville, North Carolina.

I’m sure they’re already workshopping defenses of their reprehensible behavior, and the president’s silence which served as tacit approval of their fascistic leanings. Their justifications should fall on deaf ears, but their ugliness should never be forgotten.

What nags me about it is how it’s another example of what was – and should still be – an example of everyday kindness, that has escalated into being presented (even in an unspoken sense) as a surprising story designed to evoke a “Wow, I can’t believe that just happened” response.

Set aside the lightning quickness that such vignettes spread on social media these days.

Sure, that explains how far and wide stories travel, and sure, it’s allowed us to see how nasty people can be to total strangers with a few keystrokes. (Hell, I’m just as guilty of that as anyone else.) Facebook, Twitter and comments sections on stories like this aren’t to blame for society’s overall slide, though.

It feels as if these stories – someone leaving a big tip at a diner, another person giving a homeless person a few bucks and some old shoes, or a total stranger holding a door open or saying please and thank you – serve as a sedative to blunt a collective pain.

Other times, as in the three links to related stories at the top of this story, they’re unique examples of tangible differences being made in the lives of strangers.

But far too often, they’re run-of-the-mill courtesies that should be performed without the pomp-and-circumstance of widespread celebration.

Should these stories should be written? Yeah, absolutely. But we shouldn’t need stories like this to remind us to be nice to one another but, sickeningly, that’s where we are as a people.

All of which is to say this: just be kind to one another every day.

It’s not a difficult way to live.

If enough people do it, the shock value will dissipate around such displays of decency and they won’t be treated as reminders that “Wow! I didn’t realize there are actually nice people out there.”

Oh yeah, one last thing: good job to both of the Phillies-game kids. Your parents must be proud. You didn’t realize the cameras were on you when you engaged in random, everyday acts of kindness and appreciation. I hope the world heals before you reach adulthood.

And with that Kumbaya, my readers, I am done.