Why you should block Donald Trump on Twitter, too

A few weeks back, I drove to Harrisburg to speak on a Pennsylvania NewsMedia Association panel about social media in journalism.

It was a lively, open talk about how sites like Facebook, Twitter, Snapchat and others contribute to how the news is delivered to readers, viewers and listeners.

Judging by the online reaction to my words, one message that resonated was this: “Don’t feed the trolls, but pay attention to what they’re saying.”

Translated, that means that irksome figures on social media sites are often a source of annoyance, but if you ignore them altogether, you – as a journalist – might miss some important trend lines for what’s going on out there beyond the computer screen.

Case in point: Supporters of one presidential candidate who use the word “shocked” to describe the election results might’ve seen it coming had they stuck their head out of their bubble at any point in 2016.

But I digress, because this column is about walking that statement back a wee bit.

You see, Donald Trump is a troll.

He might be the president-elect of the United States, sure, but his online behavior is that of a troll, nonetheless. This isn’t up for debate. This is an irrefutable fact.

There is no other way to describe 3 a.m. rants about whatever pissed him off on a particular day.

Or Tweet storms about how he’s so awesome that hadn’t millions of people cheated at the polls, he’d be even awesomer. 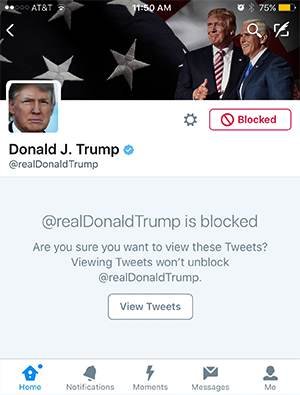 Or how someone in a position of power retweets insults about his opponents’ wives, or earth-shattering observations from 16-year-old gamers.

All of which goes toward explaining why I, Brian Hickey, a writer who covers a lot of politics through a columnist’s lens, decided to block him on Twitter a week or so ago.

I’m sure he’ll never, ever know the difference, what with him hating my profession and not caring about rank-and-file blue-city residents.

I’m also sure that some troll apologists will dismiss mine as an act that runs counter to the advice dispensed earlier this month, viewing it as a head-in-the-sand pursuit of a safe space. They are wrong. Let me tell you why:

It’s been more than a week since I fashioned my online experience to exclude 140-character messages from a man who filed for bankruptcy protection four times despite being in a business where the house always won.

For the first few days, it was lovely. Then, I noticed something troubling.

Even though I blocked Trump on Twitter, so many people retweeted or commented upon whatever words the orange grifter had spontaneously spewed forth. Before long, those RTs and comments became “ERMEGERD, DID YOU SEE WHAT TRUMP TWEETED THIS TIME?” TV, web and print stories. I've even had to respond to a couple of them, like a junkie needing a fix.

Like The Langoliers, the words were always hovering off in the distance, awaiting the perfect time to consume everything in their path.

It was then, after realizing I don’t have it in my heart to block everybody who shares what he wrote, that I realized that is exactly what he’s going for.

Trump doesn’t care how you react to his message. He just cares that you react because that means you’re thinking about him, and attention is as important to his well-being as blood and bone marrow.

I, too, have wasted a whole lot of time getting in little digs at the guy who was driven so fiercely by the need to win an election (as opposed to the job he’d won).

Why does that bother me so much? Because I now realize I – and the collective we – played right into his tiny hands.

Not anymore. There isn’t a law on the books – yet – that requires Americans to listen to Trump’s social media ramblings, and as much as he wants it to be, Trump’s victory doesn’t mean you have to buy into The Apprentice-ification of cabinet selections.

So, here’s a modest proposal for those of you responsible for keeping this sick cycle spinning:

Just block him yourself and tell 10 people who regularly retweet him on your thread to do the same. You’ll feel better about yourself and America’s future if you don’t let the troll’s rants get under your skin.

You can respect the office, and give him a chance to accomplish things in it, without subjecting yourself to his stream of consciousness rants.

All of which is to say I’d like to revise my message at that journalism session earlier this month: Don’t feed the trolls, but it’s OK not to listen once you realize they're typing hollow words solely so people hear/see what they have to say.

Kids react to, and adapt after, behavioral timeouts at home or school. Let's put the guy who lost the popular vote in an online one, as well. The worst that'll happen is you won't be able to claim "First!" with the news of how he wants to send flag burners to Gitmo.