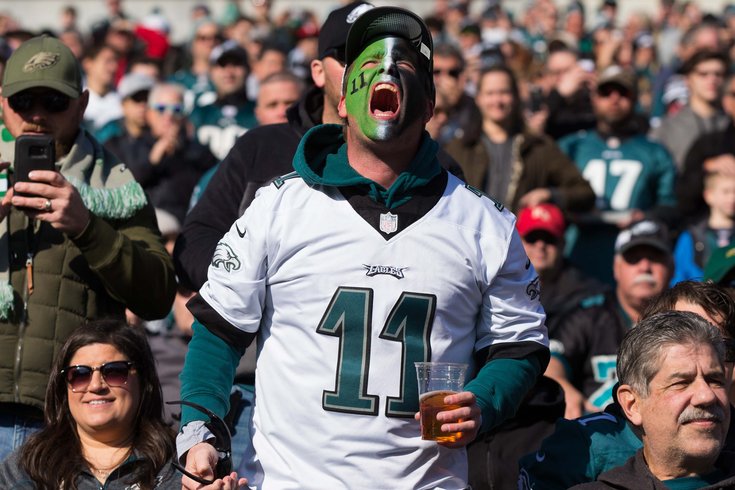 At least he has beer.

The Eagles have more or less been in the playoffs for a month now, needing every little bit of their December victories over the Rams Texans and Redskins to squeak into the postseason as the No. 6 seed in the NFC.

The playoffs officially begin for them Sunday afternoon at 4:40 (on NBC) when they travel to Chicago to try and make some real noise as they defend their Super Bowl title.

We've broken down the injuries and offered our own predictions for this one. Now, as we do every weekend, it's time to take a look around the nation to see how the various experts, both local and national, think Sunday's matchup is going to play out.

•  PhillyVoice staff: Four of five of our writers have the Eagles prevailing. Perhaps Kyle Neubeck said it best:

I mean, would you bet against Nick Foles at this point? Somebody grab me a ski mask.

The Bears' defense is a tough draw for any team, but the Eagles match up pretty well. They are strong along the offensive line, and Foles is getting the ball out about as quickly as anyone over the past three games (2.46 seconds), which should help neutralize Mack and that nasty Chicago pass rush. Philly's defense has been coming on strong of late and will be eager to take advantage of any missteps Trubisky makes in his postseason debut.

The Eagles have the clear edge in postseason experience, but the Bears went 7-1 at Soldier Field in the regular season. Chicago won nine of its last 10 games to finish the year 12-4, the most wins for the franchise since 2006. The Bears' defense has been virtually unstoppable, leading the league in takeaways (36) and interceptions (27). Philadelphia is a worthy first-round opponent, but the Bears have too much momentum to be one-and-done in the postseason.

The Bears aren't losing this week. Fans and analysts alike have pushed the Eagles as Super Bowlcontenders now that they've reached the tournament. It's understandable, given Nick Foles' heady play (he's completed 77 percent of his throws and averaged 321 yards per game since returning to the starting lineup) and Philadelphia's re-emergence over the last three weeks. But let's not forget the issues this group suffered through prior to Santa Foles flying sleigh-high over the Coliseum, The Linc and Landover during their three-game win streak. The secondary is playing a little better, but as an overall group, this season has been a campaign to forget. Not sure Doug Pederson or Eagles fans ever know what they are getting out of the running game, either.

Philadelphia's key to winning will be making Mitch Trubisky look more like an inconsistent sophomore quarterback and less like a Pat Mahomes sophomore quarterback. But if Fletcher Cox, Chris Long and Michael Bennett can't close the pocket in on him, yeeeeeesh -- don't know if the Eagles will be able to stop the Bears. TruBearsky has engineered quite a few plays out of the pocket this season. The disadvantage for the Bears, and clearly an edge for Jim Schwartz's defense, is the manner in which Matt Nagy deploys his running game. For a team that leans so heavily on its defense to set the tone, the Bears don't always complement their championship-level unit with a productive run strategy like past Super Bowl champions. Chicago ranks 11th among the playoff field in rushing yards on first down. You know who's last? Yep, the opponent on Sunday. Both the Bears and Eagles need to make life easier on their quarterbacks by putting them in manageable second and third downs. This is particularly true for Foles because the Bears' defensive unit is top shelf. And aggressive. And should have Eddie Jackson back.

•  OddsShark: Their computer model is predicting the Bears by more than 10 points.

•  Bleacher Report, NFL staff: They took the Bears with the spread (-6).

The Eagles have (sort of) been here, done this—but they were a No. 1 seed last year. It'll be a lot harder to make lightning strike twice as a banged-up wild-card team on the road. Still, the hotter and healthier Bears have to avoid emulating the 2017 Rams, who broke out with a division-winning campaign but then fell at home to the previous NFC champion (Atlanta) on Wild Card Weekend.

•  SBNation staff: Two out of five writers took the Eagles.

•  Bleeding Green Nation staff: Five out of seven writers took the Eagles, no surprise there.

MORE: Sports betting with 'The Philly Godfather': The smart bet is against the Eagles on Wild Card Weekend

•  NJ.com staff: Eagles was the majority pick by a slim margin, 4-3 by NJ.com's sports staff.

Here we go again. Nick Foles, Doug Pederson, dominant ability on both the offensive and defensive lines, smart coaching and a no-one-believes-in-us attitude. Sound familiar? The Eagles are back, and dangerous. Chicago, despite home field and a dominant defense, isn't ready for this stage.

•  Philly Influencer staff: Just like last week, Nick Piccone was the only holdout picking the Bears this week. Here's his reasoning:

There’s an aura surrounding this team, but I still can’t put my finger on it. They defeated a talented Houston Texans team at home. They have the Rams’ number. The Redskins are a laughingstock. It’s still hard for me to go all-in on this team even with Nick Foles leading the charge. And this time, Foles will be battling with bruised ribs that will surely become more battered and bruised as the game moves along on Sunday.

Sure, there’s always a team every year that you just can’t explain their success. While I wouldn’t necessarily call this Eagles season a success given the amount of injuries they’ve had to deal with, I’m still not sure they can travel to Chicago and defeat one of the best defenses in the league just because they’re young and inexperienced.

The Eagles of 2000-2001 were young and inexperienced as well and had success winning playoff games. ... I’ll go with the Bears but wouldn’t be surprised at all if the Birds got out of there with a win..

An NFL world in which Foles enters the Eagles' playoff opener as the more experienced postseason quarterback against a first-round pick is a strange one, but here we are. The play of Trubisky is the real wild card in this wild-card game, especially against a vulnerable Philadelphia pass defense. His coach, meanwhile, is part of the best matchup in this game: Nagy vs. Schwartz. For all of the Bears' edge-rush pop with Mack, the Eagles are stacked on both lines of scrimmage. And that aforementioned experience matters more than it should.

The Bears' defense could be the unit that ends up dominating the playoffs, a remarkable development in this offense-heavy season. They have to prove it right out of the box, though, because they, their players and their coach are postseason novices compared to their opponent.

The Eagles are riding their Super Bowl win of last year and the momentum of their late-season charge this year to slip back into the playoffs. It would take a group led by Mack and smothering opposing offenses to counteract what Foles and the Eagles have been able to do. The Bears haven’t sneaked up on anybody for weeks, or flown under the radar. They don’t need to, though, to get through this round.

The feel-good playoff story of Foles will end with a thud in this game. Foles will fight through his battered ribs to hang in there as a gunslinger early in the game, but eventually, Khalil Mack and the Bears’ pass rush will rattle him from all angles.

What will be particularly difficult for Foles is Chicago stopping the run and rendering Philadelphia one-dimensional to get to tee-off mode early. On the other side, Trubisky will get more help from his backs, Jordan Howard and Tarik Cohen, and Nagy will dial up the aggressiveness with timely, big pass plays to put the game away.