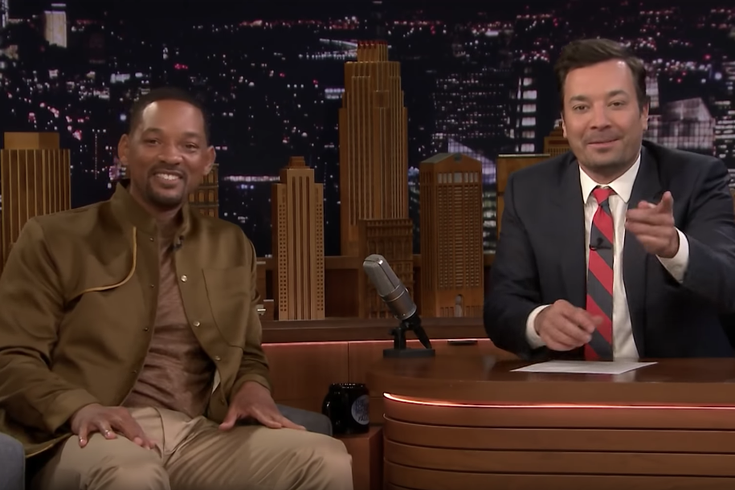 Will Smith appeared on the "Tonight Show with Jimmy Fallon" and discussed his new movie, "Aladdin."

Will Smith appeared on the "Tonight Show with Jimmy Fallon" on Monday night to rap a little bit with his friend Questlove and discuss his upcoming movie, "Aladdin."

Smith, who plays Genie in the live-action Disney film, talked bungee jumping the Grand Canyon with Fallon before diving into a rap version of "Friend Like Me."

Yes Theory, a YouTube channel that gets people to do things outside of their comfort zones, had challenged the Fresh Prince to do the bungee jump, to which he reluctantly agreed and live-streamed the event on his YouTube channel.

When Smith arrived to the spot of the helicopter, he said he was a bit freaked out to see that he had to stand on the outside of the helicopter as it took off. He joked, "What is this? SEAL Team Six?" But he admitted once he let go and jumped off, "It was so exhilarating."

The West Philly native also talked about his initial reaction to being approached to star in "Aladdin."

"I got presented to play the Genie in 'Aladdin' and the first thing is, 'Hell no,' you know?," Smith told Fallon, adding he doubted what he could bring to the role that Robin Williams hadn't already accomplished.

But Questlove – a friend, fellow Philadelphian, and the leader of "The Tonight Show's" house band, The Roots – helped him see the light by adding a different sound to the music in the film. Questlove then started tapping a beat on the drums and Smith broke out into a rap version of “Friend Like Me.”