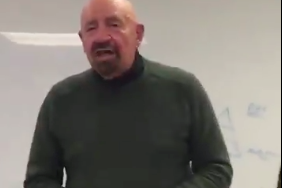 Clyde Magarelli, a sociology professor at William Paterson University, during class, explaining that Irish-Catholics were the first slaves in the U.S.

A sociology professor from William Paterson University in Wayne, New Jersey, has been caught teaching conspiracy theories in class and saying some pretty controversial things.

Among them: the moon landing was fake, the Gestapo were not a terrorist group and that Native Americans are not, in fact, indigenous to the U.S.

Who knew that conspiracy theories were a staple of university-level sociology curricula?

The professor, Clyde Magarelli, also claims in videos posted to Twitter that he was a U.S. spy while working on campus, monitoring schools clubs like the Arab League and the Young Socialist Alliance for the government.

The statements were shared by a freshman at the university, 18-year-old Benny Koval of Fair Lawn, N.J.

Never in my life did I imagine myself tweeting "my Sociology professor thinks the moon landing was faked", but here we are.

In this video, he conflates chattel slavery with indentured servitude, then claims Irish-Catholics were the first slaves in the U.S.. pic.twitter.com/11BDAEbqbH

He claims the Gestapo was not a terrorist force for the majority of its existence... as if it's possible to be literal Nazi Germany and not a terrorist. pic.twitter.com/YLzphAjIA6

Koval tweeted that she reported Magarelli to the university's sociology department chair, Jacob Felson, in an email. She was told she could  file a bias complaint against the professor, but did not do so.

“It was very unfortunate, but most of all it was a waste of my time and money,” Koval told NorthJersey.com. “It was incredibly frustrating going to a public university for a taxpayer-funded education and I’m learning about how the moon landing was faked.”

The first thing I did was confront the professor directly, only to discover his distaste for academic discussion. That incident is detailed in the below e-mail I sent to the Head of the Department a few weeks later. pic.twitter.com/LkcLrPlLUu

Mary Beth Zeman, a spokesperson for William Paterson, told NJ.com Magarelli and the statements are currently under review.

"Our commitment to academic excellence is addressed in one of the University's five core values: 'As individuals and as an institution, we seek to model and to impart to our students the highest standards of knowledge, inquiry, preparation, academic freedom and integrity, as well as an expanded sense of what an individual can accomplish,'" she said in an emailed statement to NJ.com.

Koval has been involved with other controversial incidents involving school personnel in the past. In March 2016 she was at the center of a bullying investigation after she made critical comments against Israel on Twitter.