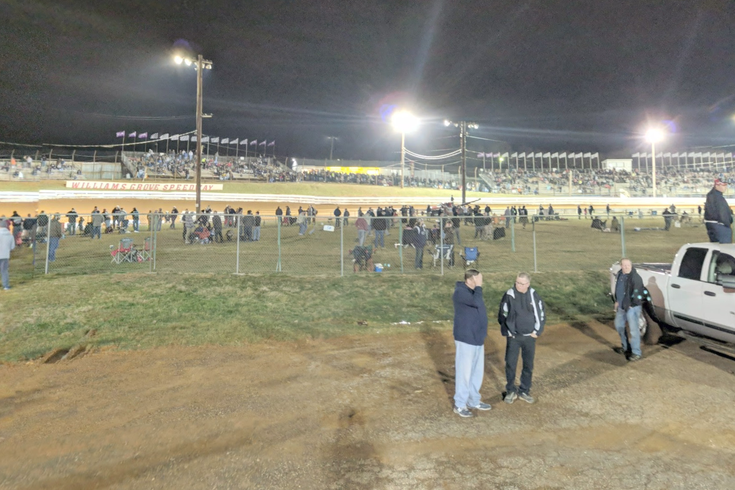 Cumberland County's popular Williams Grove Speedway is shown here. A 67-year-old man died when a vehicle went airborne in a crash and struck him in the speedway's spectator pit.

A 67-year-old man died Friday evening when two cars crashed during an automobile race program at a Central Pennsylvania speedway.

Richard Speck, of Mechanicsburg, was sitting in the infield Friday evening at the Williams Grove Speedway in Cumberland County, just a 20-minute drive from Harrisburg. A two-vehicle collision occurred during one of the evening's races, sending one vehicle airborne after hitting the inside wall, according to WGAL.

The vehicle hit Speck, who was sitting in the back of his pickup truck. Speck was pronounced dead at the speedway.

The Speedway was forced to cancel the rest of the evening's program after the accident:

Some on social media saw the accident as an opportunity to add more safety measures to the speedway's spectator pit area:

How about the track moves the pits outside or puts up an actual fence that can hold a sprint car in on the inside wall. Thoughts and prayers are all well and good but we need to ensure this does not happen again.

Is the sport not safe enough in the USA????
We don’t have the speeds on our smaller tracks as there and also don’t have anywhere near the amount but sport seems to be taking good people away.
I can’t believe tracks there don’t have the big reinforced fencing that we do here.
Why?

I have been saying for years the pits needed to be moved out of the infield.

The race, called the Billy Kimmel Memorial, is an annual event held to honor a 27-year-old Mechanicsburg man who died in an accident at Williams Grove in 2007, according to PennLive.

The crash remains under investigation by the state police, the Cumberland County coroner’s office and track officials.