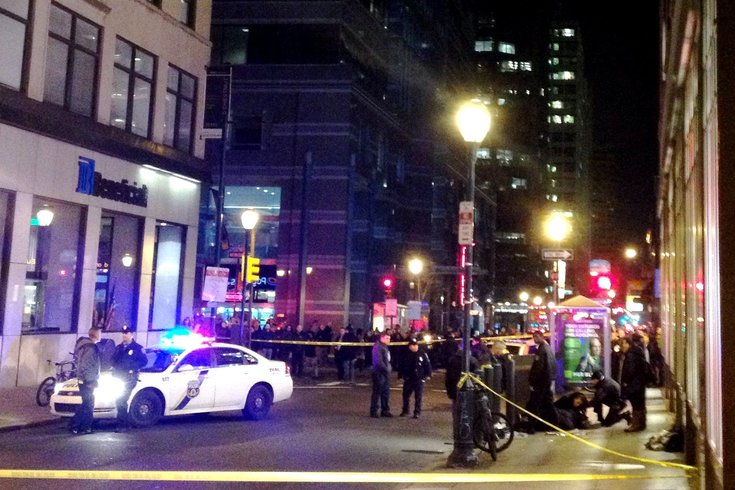 A woman fell eight stories Thursday night from an apartment at 1530 Chestnut Street.

A woman fell about eight stories from a Center City apartment building and landed on a pedestrian shortly after 6 p.m. Thursday.

Kim was visiting friends at a Rittenhouse apartment building when she fell fell to the sidewalk in front of the H&M store at 1530 Chestnut St., NBC Philadelphia reports.

She was rushed to Jefferson University Hospital, where she died.

6ABC is reporting that the student was leaning out of a window, taking photos, when she fell.

The pedestrian, a 44-year-old woman, was rushed to Hahnemann University Hospital with neck and back injuries.

Alfred For, who was walking west on Chestnut Street and arrived on the scene shortly after the fall, said there was a "lot of blood."

“In front of H&M, there were a couple of people on the ground trying to save this woman,” For said, who took photos and video at the scene. “At first it looked like both of them were dead. They were doing CPR on one of the women.”

Temple University issued a statement regarding the death of Kim, who was identified by a university spokesman as an 18-year-old freshman:

Temple University is deeply saddened to learn of the death of one of our students in Center City Philadelphia. Our thoughts and prayers are with her family and friends. Counseling for Temple students is available at Tuttleman Counseling Services. For more information, visit our counseling website. The 1530 Apartments building is a nine-story building with 45 apartments, with an H&M store at street level. Finished in 1902 and designed in Georgian Revival style, the building was originally known as the Perry Building, and later changed to the Bailey Banks and Biddle Building. It is classified as an official historic site by the Preservation Alliance of Greater Philadelphia. The structure has several architectural exterior flourishes, including smooth limestone, granite pilasters and decorative terra cotta accents.