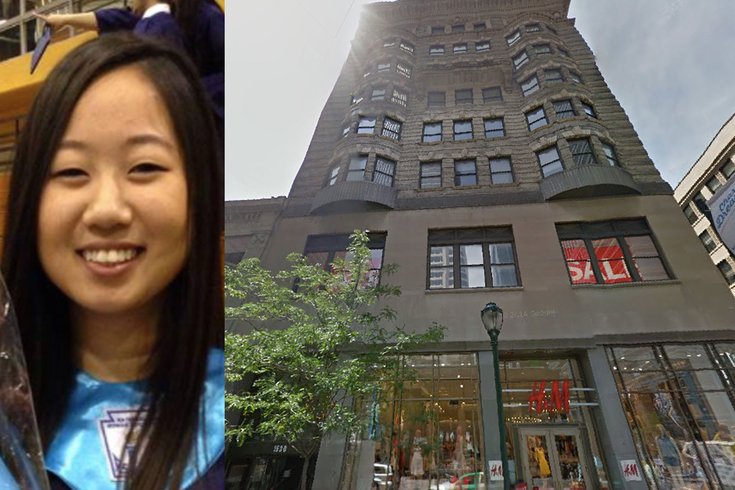 Rebecca Kim, 18, fell from a window of this building in the 1500 block of Chestnut Street in Center City, Philadelphia, in January 2015.

A 45-year-old Lansdowne woman who was severely injured when a Temple University student landed on her after a fatal fall from an eighth-floor Center City apartment building window ledge has filed a lawsuit related to her injuries, Philly.com reports.

The plaintiff, Erica Goodwin, and her lawyer claim in the suit that she has suffered “physically, emotionally and financially” from the incident, which occurred back in January 2015 when then-Temple University student Rebecca Kim, 18, fell on her to her death from an eighth-floor window ledge at 1530 Chestnut St., striking Goodwin who was on the sidewalk.

Kim’s death was ruled a suicide by the Philadelphia Medical Examiner's Office.

In the lawsuit, the teen's estate, the property companies, the Art Institute of Philadelphia and the students who lived in the apartment are named as defendants.

"The defendants 'were aware or should have been aware that students often opened the windows . . . and would throw objects from the windows or partake in other dangerous and unsafe behaviors,' the suit says. Despite this knowledge, defendants failed to take corrective action to prevent injury to others'."

The defendants declined to comment to Philly.com citing ongoing litigation.

Read the full report at Philly.com.