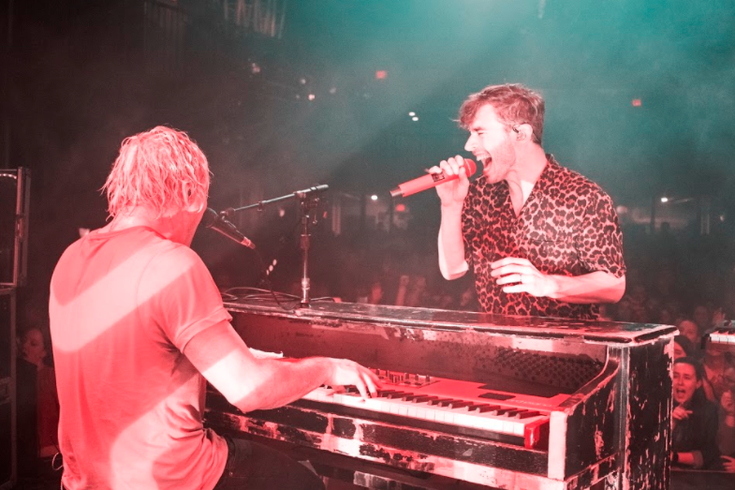 If Yogi Berra, the master of the malaprop, were alive, New Politics would be the late Yankee icon's favorite band. Frontman David Boyd has a way with words and music.

RELATED STORIES: Dan Auerbach says The Black Keys will reunite soon enough | A solo Beth Ditto rages on | Singer Kimbra is much more than 'Somebody That You Used to Know'

"It's a challenge," Elmaleh said.

The same goes for Boyd. Every so often, the Copenhagen native, who moved to the U.S. a decade ago, drops a malaprop.

"Thank you guys, we will never forget to remember this night," the vocalist-guitarist uttered at a recent show.

Drummer Louis Vecchio nearly provided a rim shot but he was too busy laughing.

"Obviously, David meant to say that this will be a night we will never forget," Vecchio said while calling from Phoenix.

It's hardly surprising that the band jokingly named its fourth and latest album, "Lost in Translation."

"How could we not," Vecchio said. "It was obvious. So we went with it."

But when it comes to the sonic side of New Politics, nothing is lost in translation. The band often echoes a certain sound, which emanated from the U.S. a quarter century ago.

When Eddie Vedder sings "Speaking of a child of the ‘90s," during Pearl Jam’s “Habit,” he could be referring to the members of New Politics.

The pop-punk trio, which also includes bassist Soren Hansen, was obviously weaned on music from the Clinton era.

“There’s no doubt about that,” Vecchio said.

“I grew up in Long Island and was all over it. It impacted me and David and Soren, even though they grew up in Copenhagen. Not only can you hear it in our music – it’s something that we’ll never deny. When I was a teenager, I fell in love with grunge. I was so into Nirvana and Pearl Jam. So many great bands came out of Seattle and their songs still hold up today.”

Vecchio is certain the band will continue to evolve.

"I think we're growing with each album," Vecchio said. "Each time out, we're learning a little more, but there always is that touch of the '90s."

Each of the band’s albums has bits of the ‘90s in the sonic mix, but New Politics moves in a different direction each time the perform. There are elements of electronic and tribal during "Lost in Translation."

“We continue to move on,” Vecchio says.

“We’re maturing. We see life differently than we did when we made our first album [in 2010]. We’re trying different things, but there still is that ‘90s edge in the mix, which we don’t apologize for. For anyone who hasn’t seen us, they should know we bring that energy bands had during the ‘90s. Anything goes at our shows. It’s wild and unpredictable. When you look back at what bands from that era did at shows, it’s pretty remarkable. You never knew what Eddie Vedder would do. It was intense. We’re all about bringing that intensity. Expect the kind of show that you don’t typically see these days.”