On 'Signing Day,' students at Cristo Rey are matched up with their employers 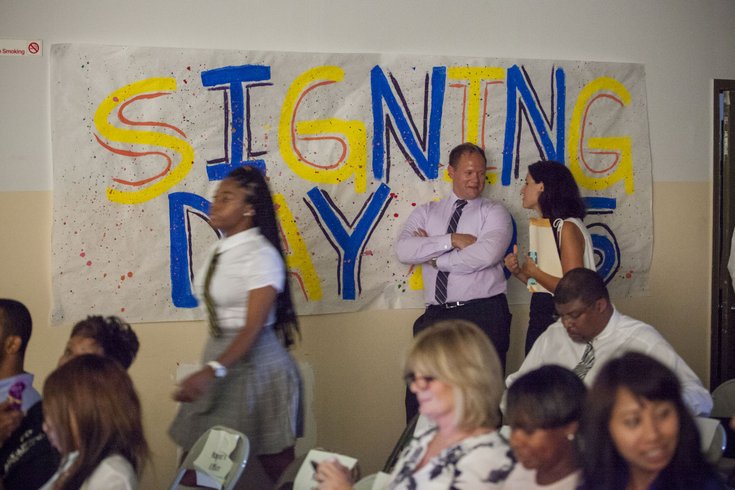 Imagine a private school that provides a rigorous prep-school education to some of the lowest–income students in the Philadelphia region –  and pays for much of the cost by their students' work with many of the area’s top employers.

In the process, the school’s 450 students network, learn workplace skills and job readiness.

And, in return, every student who completes high school gets accepted to a college.

Students attend the independent Catholic school, which is open to all faiths, in the Logan section of the city four days a week.

The other day of the work week they work for an all-star lineup of about 90 top employers, non-profits and government agencies, including Comcast, GlaxoSmithKline, Wawa, the zoo, the Philadelphia Police Department and the mayor’s office.

Some of the companies, such as Independence Blue Cross, fund not just their own jobs, but also pick up the costs for non-profits and government agencies to "hire" the students.

The wages earned by the students in these jobs pay for 65 percent of the $12,500 per student cost of tuition, explains founder and president John McConnell.

The rest of the cost of tuition comes from a small buy-in from the families of the students – about $1,000 per student, but sometimes less – as well as fund raising and tax credits. 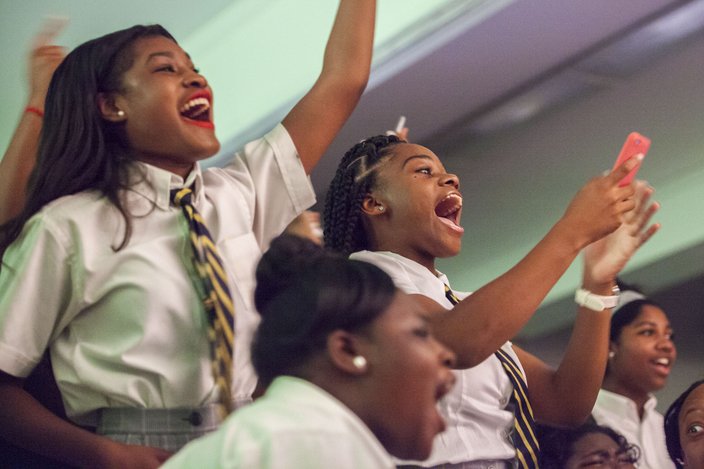 Cristo Rey is part of a network of independent Catholic high schools that began in Chicago in 1995, says McConnell.

The schools are the creation of a Jesuit priest who taught for decades in Peru before being called home to a find a solution to a need for a college prep school in a poor section of that city, and no means to fund it.

The first Cristo Rey school opened a year later. In 2001, the plan to expand the model began, with the Philadelphia school opening four years ago.

There are about 25 Cristo Rey schools now; the organization hopes to have 40 within another five years.

“I’m confident every one of our graduates will get into college. And what’s more, they stay in college at a rate twice that of their peers,” says McConnell.

He attributes that statistic to the confidence and mentorship that come with students working in real-world situations.

But all is not serious adult drudgery at the work-oriented high school.

Wednesday was billed as “Signing Day” at the school, part pep rally, part mock sports team draft day, matching up the students and the organizations where they will work.

There were pictures, videos, T-shirts, a drum line and dancers. The students entered the assembly through a tunnel formed by the outstretched hands of their employers. 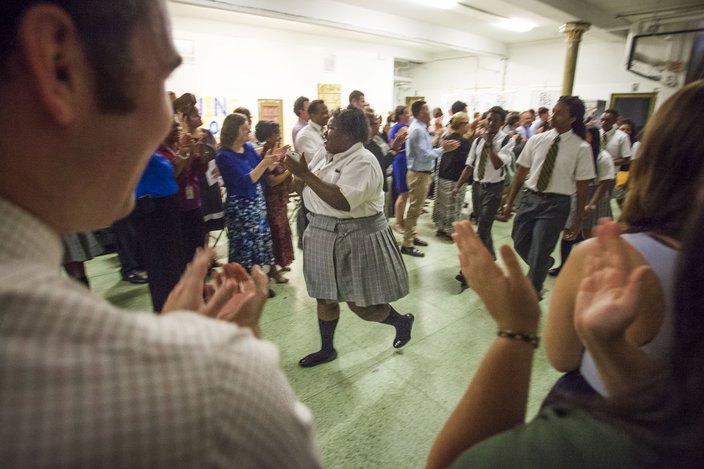 One of the students was Essence Battle, a 15-year-old sophomore thrilled to return for a second year at Communications Media Inc., a pharmaceutical messaging company.

Battle worked at the company’s Pennsauken location last year in the accounting department.

Now she wants to move to New Jersey after going to college to become either a lawyer or accountant. She doesn’t think that would have been possible before attending the school.

The job skills program led her to choose Cristo Rey for high school, she says.

CMI’s chief financial officer, John Donovan, said the company’s founder, Stan Woodland, grew up in North Philadelphia and felt it was important to give back.

Lakiyah Chambers, the company’s human resources manager, said the experience provides “confidence and energy” for students who may have never ventured outside their neighborhoods.

“They’ve never been around college educated people. Now they are working in Center City in offices” filled with college-educated employees, and seeing themselves working in those institutions after college, he says.