Odds, predictions and fun facts about all 32 teams in the biggest soccer tournament on Earth

Folks, the World Cup starts on Thursday. But for the incessant (mostly myopic 'Merican) folks who prefer trotting out tired jokes instead of appreciating the most popular sport in the world for all it has to offer, it's a wonderful 31 days to be alive.

Sure, the U.S. Men's national team (and wunderkind Christian Pulisic of Hershey) failed to qualify for the 32-team tournament which Russia will host from June 14 through July 15. That takes away some of the American rooting interest, sure, but it doesn't detract from the quadrennial tournament's glory. Also this year's marks the first World Cup for which sportsbooks across the country will have the tournament on their boards.

For fans (and gamblers), this post will do several things:

-- Lay out their odds of success

-- Offer viewing options and schedules and

Here are the basics: 32 teams qualify (the U.S. not among them this time) and are broken up into eight groups of four national teams.

The top two teams from each group advance to the knock-out round which is a win-or-go-home match. The first-place finisher in a group matches up against the second-place finisher in another group (i.e. Group A winner faces Group B runner-up and so on.)

So, let’s take a look at the squads and sprinkle in some (clearly biased) predictions at the end. The schedule for the group-stage matches can be found via this link.

Egypt (150/1): This side has never won at the World Cup. But this side has never had someone playing like striker Mohamed Salah played for Liverpool this domestic season. They’re not favored to get out of the group, but if they’re ever going to get off that winless schnied, it’s 2018 in Russia. Salah's injury in the Champions League Finals won't help matters, though.

Russia (33/1): They qualified for the tournament by nature of being its host. Sure, six host countries have hoisted the trophy, but Russia’s best finish was fourth place (when they were called the Soviet Union.)

Saudi Arabia (750/1): It will not likely be a fun group stage for fans of this side.

Uruguay (25/1): They got knocked out of the 2014 World Cup courtesy of a 2-0 loss to continent-mate Colombia. This, likely because their star player Luis Suarez got kicked out of the tournament for biting an Italian player. Their lineup features internationally known players including Edinson Cavani (PSG) and Diego Godin (Atlético Madrid) along with an infusion of young talent.

Iran (250/1): This is a deceptively dangerous side coming into their first-ever back-to-back World Cups. They’re not prone to being happy just to be there. They beat the U.S. 2-1 in 1998 and, last World Cup, came within one miraculous 91st minute goal away from the greatest player on earth of earning a draw against Argentina. Building on that will be difficult in a group that features two international powerhouses, though.

Portugal (25/1): This side won the Euro tournament in 2016 and have the greatest pure striker on the planet in Cristiano Ronaldo. It’d be shocking if they didn’t advance to the knock-out round.

Spain (7/1): They’re 10-4 in their last 14 World Cup matches and hoisted the trophy in 2010 courtesy of an extra time goal from Andres Iniesta, who will be playing in his last World Cup this time around. The roster is stacked with stars from Barcelona, Real Madrid, Manchester United, Manchester City and Bayern Munich. There’s a reason they have the fourth-best odds to win it all.

Austraila (200/1): You know it’s a bad thing when your squad, which qualified for the World Cup, is given less of a chance to win than a squad that DIDN’T qualify for the World Cup. Still, they’re feeling confident, and that’s always a good thing.

Denmark (80/1): The Danes, led by Christian Eriksen, qualified at the last minute by thrashing the Republic of Ireland in a playoff. That sort of momentum makes for a dangerous side.

France (6/1): They won the title on home soil in 1998 and lost in the finals eight years later. This side is deep and full of talent. Antoine Griezmann. Olivier Giroud. Paul Pogba. Kylian Mbappe. Samuel Umtiti. If this team gels, watch out.

Peru (150/1): The South American nation returns to the World Cup for the first time in 36 years. With captain Paolo Guerrero suspended for “sipping aromatic tea made from coca leaves,” well, their stay in Russia might not be a long one.

Argentina (8/1): Losing your starting goalkeeper to a knee injury just before the World Cup is never a good thing. The team which lost in the 2014 finals was on the verge of not qualifying for the tournament, but then, a player by the name of Lionel Messi went ahead and got a hat trick to defeat Ecuador and secure their place. Messi is one of the all-time greats, but the one thing he lacks to make him arguably the G.O.A.T. is hoisting the World Cup trophy. An a-game, knows-it-might-be-his-last-chance Messi is a nightmarish prospect for defenders and goalkeepers.

Croatia (33/1): With a midfield featuring Real Madrid’s Luka Modrić, Barcelona’s Ivan Rakitić and Fiorentina’s Milan Badelj, this team could give Argentina a challenge to win the group.

Iceland (200/1): They’re the underdog darlings of the tournament in their first-ever appearance. Since the U.S. Men’s National Team didn’t qualify, you very well may hear people cheering for ‘em in the States.

Nigeria (150/1): They’ve been in the same group as Argentina five of the last six times they’ve been in the World Cup, advancing to the knock-out round thrice. They’ll need to beat a superior Croatia side and fend off a plucky Iceland to make it four.

Brazil (5/1):They’ve raised the trophy five times. They’ve got a stacked lineup and a national heritage that treats soccer more like art than sport. They want to avenge a 7-1 loss to Germany in the 2014 semis. And, they look poised to make a run at the title, provided Neymar regains his form after an injury layoff and they can shore of their back line in light of starter Dani Alves injuring his knee earlier this month and being ruled out of the tournament.

Costa Rica (250/1): Last time, they landed in the “Group of Death” and won it outright. With a goalie like Keylor Navas, it’d be folly to write their chances to get to the knockout round off.

Serbia (125/1): Getting to the knockout round would be a major achievement.

Switzerland (80/1): Keep an eye out for Xherdan Shaqiri, he of the hat trick vs. Honduras in the last World Cup and bicycle-kick goal against Poland in Euro 2016.

Germany (9/2): They’re the favorites, and for good reason. They won all 10 matches in qualifying and cut Mario Gotze, who scored the Cup-winning goal just four years ago. Still, no team has repeated as World Cup champions since Brazil in 1958 and 1962.

Mexico (80/1): The U.S. team’s mortal enemy has the most World Cup appearances without having lifted the trophy. Could that change this year? Well, they’ll have to handle South Korea and Sweden and hope they don’t draw Brazil in the Round of 16, which is pretty likely should they finish second in the group.

Sweden (80/1): They made the Round of 16 in 2002 and 2006, but didn’t qualify in each of the past two World Cups. Their key to returning to the knockout round: Beating Mexico in the group stage.

Belgium (12/1): Will they finish first or second in the group? That's the big question this dark-horse team faces at the outset of the tournament. Now for the bad news: Either way, they'd likely be on a collision course with either Brazil or Germany in the Round of Eight (if they were to reach that point.)

England (16/1): Hey, if the Eagles can win a championship for the first time since 1960, who's to say that the Three Lions can't win its first World Cup since 1966? And a knockout-round game against Germany would be must-watch TV.

Panama (750/1): This should have been America’s spot. Here's hoping they lose each match by 10 goals.

Tunisia (500/1): In 1978, they became the first African side to win a World Cup match. They haven't done so since. If they're going to get off that 40-year drought, it'll be against Panama. And that will be a nice thing to take home with them after a three-match stay in Russia.

Colombia (25/1): They were the upstart stars of the 2014 World Cup, and they have a relatively easy group from which to advance this time.

Japan (200/1): They switched coaches just two months ago. That can either be a revelatory infusion of energy (see the U.S. when Jurgen Klinsmann was shown the door in 2016) or a harbinger for disaster. Sorry, Samurai Blue fans, it's probably the latter.

Poland (40/1): Poland hasn't advanced to out of the group stage in 32 years. We'll know a lot more about whether that can change after their first match vs. Senegal. Having a forward like Robert Lewandowski of Bayern Munich could make all the different in the world.

Senegal (125/1): Forward Sadio Mane plays in the UEFA Champions League Final on May 26. Then, he'll join the side roughly two weeks before the World Cup begins. The captain, Cheikjou Kouyate, says the side is out to "write our own story" in Russia. This group is far from impossible to sneak through. I'd keep an eye on them.

Here's are some streaming options, as well.

Also, if you're a Comcast Xfinity customer, you're in luck. The good folks over at its X1 cable platform walked me through their 2018 World Cup Bilingual Experience on Tuesday. It made me wish I were a customer, what with its 4K resolution and access to DVR highlights, text notifications in advance of each match, a sports app, on-screen in-match stats and the ability to stream all matches and content on all your devices.

Tune in during the match? You'll have the ability to start it over from the beginning.

Don't have time to watch the whole thing? They're pinpointing highlights that you can fast-forward through at your speed. 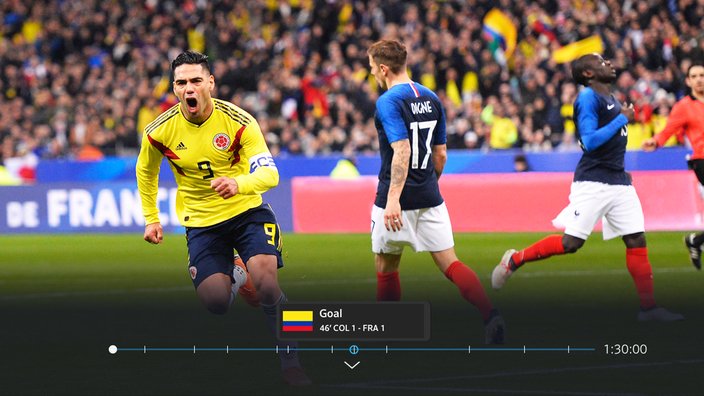 Xfinity X1's '2018 World Cup Bilingual Experience' offers a bunch of innovative ways to watch, or catch up on, matches in the tournament that runs from June 14 through July 15.

Fado is among the soccer bars in town that'll air the matches live. (I mention them alone because they're down the block from PhillyVoice world headquarters and -- don't tell my bosses -- maybe I'll stop in for a match from time to time. If you know of any other bars doing the same, send them along via email and I'll add them in here.)

If you're only able to watch one match each day of the knockout stage, I'd recommend these (with the caveat that any of the do-or-die matches in the closing days of the opening round is worth watching):

Mind you, this is a fool's errand, trying to forecast who comes out of which group in which position. But much like we do with the less-intricate NCAA Men's Basketball Tournament, there are World Cup brackets available online.

Here's how mine shakes out (winner of each match in bold):

B1: Spain vs. A2: Egypt/Russia (If Salah's doesn't return to full health, the former; if not, the latter)

France vs. Brazil. France capitalizes on the Alves injury to keep scoring pace with the Seleção.

Argentina vs. Germany. Payback for the 2014 finals.

Brazil vs. Germany. Payback for the 2014 semis.

France vs. Argentina. I just feel as if it's Messi's year. Everything's been building toward this coronation.