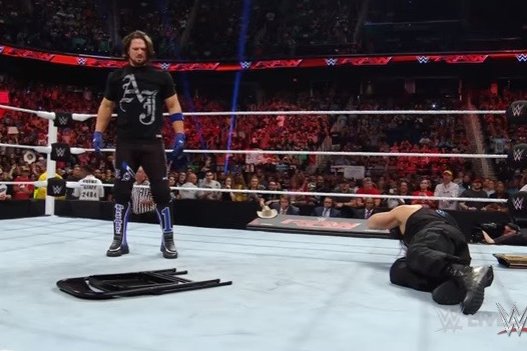 AJ Styles and Roman Reigns clash in an Extreme Rules match on Sunday night for the WWE World Heavyweight Championship.

The most extreme night of the year is upon us as WWE presents Extreme Rules this Sunday night from the Prudential Center in nearby Newark, N.J. On tap are five title matches and the continuation of two feuds that have been underwhelming so far. We’ll also see the continuation of The Club vs. The Bloodline feud with AJ Styles taking on Roman Reigns for the WWE World Heavyweight Championship in an Extreme Rules match and Luke Gallows and Karl Anderson going toe-to-toe with The Usos in a Texas Tornado match. The main event alone will make it worth watching this show.

Here’s what I think will go down this Sunday night from the Prudential Center:

This match is slated to take place on the Kickoff Preshow. Big surprise. Corbin has cooled off since joining the main roster at WrestleMania, but that’s more indicative of the creative team throwing him into a feud with Dolph Ziggler, who is just going through the motions at this point. I can’t blame Ziggler for being just another guy on the show because WWE has made him that way. It’s unfair to him and it’s unfair to Corbin because he never should have lost to him.

I get the whole, well, they have to make it seem like he’s not just going to steamroll through the competition and Ziggler’s a big enough name to not be able to get a win-against-him argument, but then why not just have Corbin beat jobbers out of the gate? That does a better job of building him than a back-and-forth feud with Ziggler does. Since this is a No Disqualification match, I’d expect Corbin to come out on top because there’s no way Ziggler should’ve beaten him once, much less twice.

Unlike the Kalisto feud with Ryback, at least this feud has gotten off to a good start, despite Rusev losing clean to Sin Cara two Mondays ago on Raw. Rusev is being re-built with Lana at his side after the unceremonious disbandment of the League of Nations.

Thankfully, Lana is back with Rusev and that’s made for some great television. Last Monday, Lana took to Twitter to berate Kalisto and Rusev joined in. That’s how you book in 2016. They all furthered the feud and made me care way more about this match than I should.

It’s time for Kalisto to drop the strap. He’s not doing anything with it and he’s not the next Rey Mysterio. Give it to someone who will at least defend the title once a week. Let’s make that happen, WWE. That’s not to say I don’t like Kalisto. I think he’s really good. But, he’s been underwhelming as United States Champion. The booking doesn’t help him, either. If that was to improve, I’d probably change my mind.

The New Day (c) vs. The Vaudevillains

I figured this would be the tag team title match for this pay-per-view after the No. 1 contender’s match a few weeks ago at Payback. However, how we got here wasn’t likely expected and with the serious injury to Enzo Amore [who is doing okay from what we hear now], it only made sense for the heels to take on the huge babyfaces in The New Day this Sunday.

Aiden English can sure pop them vocals, so listening to him sing how he and his partner Simon Gotch are WWE World Tag Team Champions would probably never get old, much like New Day’s routine. While a tag team title change could be coming soon, I don’t think it’ll happen Sunday night. Though, I wouldn’t exactly be mad if the titles did change hands. This should be a great match as some of the tag and singles matches the teams have had against each other have been really good. However, it won’t be enough for the villains of old to grab the WWE World Tag Team Championships.

The Club [Gallows and Anderson] vs. The Usos

After The Usos won against The Club cleanly this past Monday on Raw, I figured there was no way that would be the end of it. Heading into Extreme Rules, there would have to be another match between the two teams, and that’s exactly what will be announced on Thursday’s edition of SmackDown. A Texas Tornado match enables all four participants of each tag team to be in the ring at the same time, when anyone can be pinned at any time.

Gallows and Anderson should be running roughshod on the WWE roster, much like they did the first few weeks of their debut. The Usos, even paired with their cousin and WWE World Heavyweight Champion, are still a bland tag team and don’t deserve to win another match against these two guys. I’m looking forward to the match, but if Gallows and Anderson don’t get a win and look impressive in doing so, it won’t be good.

Will we see a tie where one member of each team gets pinned at the same time? Possibly. I don’t think Gallows and Anderson can afford anything but a win, however.

Your winners: The Club

So, this match is basically of the Steel Cage variety, with an added layer above the cage with such objects as a straitjacket, Mitch II the plant, a barbed-wire baseball bat and more weapons. A fitting feud blowoff, right? Ambrose and Jericho have only been feuding for the last two pay-per-views, so I would imagine Ambrose would get a win here and Jericho will be gone for a while.

In fact, after Payback, Jericho sent out a Tweet saying that he was gone from WWE. Then, he appeared on Raw that same night. So this might not be the final match in their feud.

The feud has been built really well in terms of the storyline and Jericho has really been one of the best heels in WWE since turning on Styles before WrestleMania. However, the feud should contain more animosity and more vitriol than it has, especially coming from Ambrose. It’s almost a joke to him now after the whole Highlight Reel/Ambrose Asylum debacle. That was probably not a great angle looking back given that they didn’t capitalize on it.

Ambrose is one of the most popular stars in WWE, and Jericho is the perfect adversary to him right now. I’d expect Ambrose to get a win, but I never know with Jericho. He could be gone by Monday or not. I’d imagine a rubber match between the two if Ambrose pulls out a victory, which I expect him to do.

I hope we see the debut of a new Jericho jacket.

Is Ric Flair playing us all for fools by suggesting Charlotte’s chances against Natalya are “not guaranteed” because he’s banned from ringside for this next match?

This feud has actually been a lot better than I thought it would be coming out of WrestleMania in April. With Sasha Banks and Becky Lynch currently out of the championship picture, Natalya has really impressed me in the ring and on the mic to build this as almost an old-school type of feud. Of course, she had her uncle, Bret Hart, in her corner at Payback, so learning more about professional wrestling from her uncle to add to the knowledge she already has really makes this feud worthwhile.

Many will think the women’s division is now stale until Banks wins the title. Natalya and Charlotte just reinvigorated it, and submission matches are generally really good. However, with or without the help of her father, Charlotte will retain the Women’s Championship here.

The Miz (c) vs. Cesaro vs. Kevin Owens vs. Sami Zayn

I mentioned earlier how it was time for Kalisto to lose his United States Championship, and I will say the same thing for The Miz here. Though his pairing with his real-life wife Maryse has been great for his character, the fact that he holds the WWE Intercontinental Championship bring little, if any, credibility to the title. I know credibility isn’t as worried about in today’s wrestling, but having either of the other three hold the title would bring a lot more eyeballs to the program.

The Miz does his job very well and is a great heel. But he’s starting to borderline on real heat and X-Pac heat where legitimately nobody wants to see him on television. Zack Ryder’s reign with the championship after WrestleMania lasted 24 hours before Miz beat him. The same should happen in this match.

I don’t mind who wins this match other than Miz, and I think it’ll be Owens because of the ready-made feuds with Cesaro and Zayn for the title. That would be great and it could stretch all the way to SummerSlam when Zayn wins the title from Owens, right!? I can book. I can.

This angle has been built very well with the inclusion of Gallows and Anderson and The Usos for Styles and Reigns, respectively. The two factions have battled for weeks, and with this match being Extreme Rules, which calls for no disqualifications, there must be a winner.

I don’t think Reigns loses the championship for quite a while, but would be pleasantly surprised if I’m proven wrong. Styles being the WWE World Heavyweight Champion in 2016 would be pretty awesome, but it’s all in how Reigns loses the title and reaction that would make this storyline string out even longer and even better. However, with Seth Rollins slated to return soon and rumors running rampant that he and Reigns will feud over the championship, I don’t expect Styles to walk away with the title on Sunday.

I do, however, expect a great match. Extreme Rules allows Reigns’ weaknesses to be masked and allows Styles to jump out of his comfort zone. Styles isn’t a wrestler that exudes “extreme,” but he absolutely can carry Reigns to a great match here. I expect a lot of interference and a few weapons to be used, but ultimately the champion retains in what could possibly be the best match of the night.

I’m looking forward to this card as much as I looked forward to Payback three weeks ago, and that show delivered. I expect nothing less from this show.