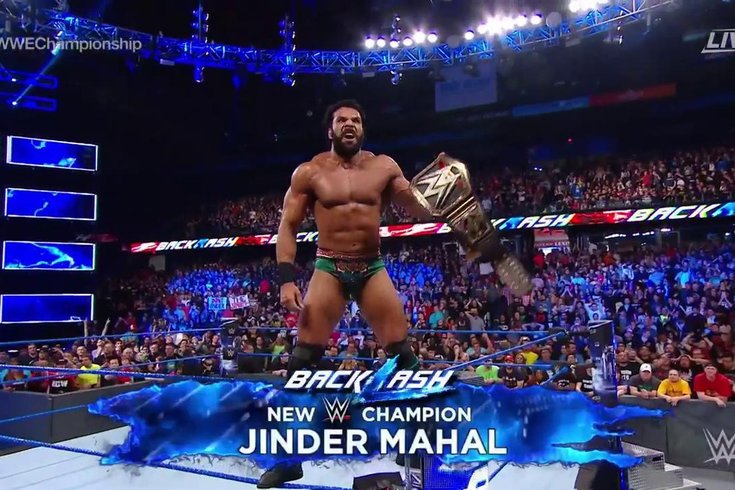 Live from the Allstate Arena in Chicago on Sunday night, the SmackDown Live roster performed in the brand’s first pay-per-view event since the co-branded “Ultimate Thrill Ride” at WrestleMania 33 in Orlando back on April 2nd. There were a few new faces on the blue brand, as the Superstar Shake-Up that occurred shortly after the biggest event of the year seemed to make Raw that much stronger. However, with the in-ring debut on WWE’s main roster for Shinsuke Nakamura, an absolute clinic-in-the-making with Kevin Owens and AJ Styles going one-on-one, and Jinder Mahal getting his first shot at the WWE Championship against Randy Orton, Backlash looked pretty good on paper heading into Sunday night.

Here are the results in order, complete with my thoughts on the night’s action.

I’m digging English’s return to his singer personality, but other than that, the guy’s simply an enhancement talent, much like he was when he teamed with the recently released Simon Gotch as a member of The Vaudevillains. I was actually a fan of that tag team, but they simply couldn’t get over with the crowd enough to make a real run in the tag team division. Of course, they didn’t get much help, either.

Dillinger doesn’t need much help, as he’s been over with the crowd for quite a while now. There’s nothing that special that sets him apart from the other talent, but the crowd reaction he gets now, complete with the crowd chanting “10!” even in other matches he’s not participating in really shows how the crowd still certainly can control the message.

Dillinger got the win after hitting English with the Tye Breaker.

Shinsuke Nakamura defeated Dolph Ziggler by pinfall via the Kinshasa

While some may have thought Nakamura being in the first match on the main card was somehow slighting him, I took a different point of view. This match may have been the most anticipated one of the night, simply due to Nakamura, but the SmackDown brand isn’t a stranger to putting on big matches first. In fact, last October’s No Mercy pay-per-view featured the WWE Championship Triple Threat Match going on first. Of course, that was to avoid a head-to-head with the second Presidential Debate then, but still, having this match first wasn’t a slight to Nakamura, Ziggler or anyone else.

The match was really good. One of the better openers of a pay-per-view we’ve seen in recent months. Nakamura got a lot of his potent offense in, giving new viewers a glimpse into what he’s all about.

Well, this was something. After doing a 180 and getting the crowd interested in them again thanks to their Fashion Files segments on SmackDown, Tyler Breeze and Fandango had a chance to become SmackDown Tag Team Champions Sunday night. And they were awful close.

Breeze decided to play dress up, coming out as the maintenance man with a mop that he portrayed last Tuesday night. Then, he dressed up as an old lady, which prompted the Chicago crowd to chant, “Let’s go, grandma!” moments before he suddenly flashed one of the Usos, then performed a Bronco Buster on their soul.

Not PG at all.

Despite a few near falls, the champions were able to retain after Fandango ate a superkick while perched on the top.

Zayn’s been put in this position seemingly ever since he was called up to the main roster - make other wrestlers look good while continuing to have the crowd on his side. It’s tough sometimes.

But on Sunday night, Zayn didn’t have to worry about that. Instead of Corbin wiping the mat with him, which many – including myself – expected, Zayn notched a big victory after hitting Corbin with the Helluva Kick out of nowhere.

Now, was this the right move? It seems like Corbin could be getting a monster push soon and could very well be in the title picture before 2017 ends. In fact, I expect him to, even after losing at Backlash. This seems to me the kind of match that gives Corbin the bump up. Will he continue feuding with Zayn? Time will tell. But at this point, what’s there to gain? Corbin deserves a main event run, and there may be no better time than right now.

Lynch was sporting quite a different hairstyle on Sunday night, but that doesn’t mean it was bad. In fact, she pulls it off quite well.

what did she do i don't even care she's awesome #WWEBacklash pic.twitter.com/P3DyuNXXVY

It was an OK match. Nothing was great, but nothing was terrible. Lynch had Natalya locked in the Disarm-er, but was saved by Carmella. Natalya didn’t sell her arm a whole lot, and I’m only pointing that out because wrestling fans generally get upset when wrestlers don’t sell when they’re supposed to sell. Who knew?

Natalya wound up locking Lynch in the Sharpshooter, causing her to tap out eventually. The Welcoming Committee reigns.

Someone on the face team has to turn soon, right? Right?

This was the match I’d been looking forward to the most. And boy, did it deliver.

Owens and Styles have a knack for delivering even when expectations are high. The psychology on this match was on full display with Owens focusing on Styles’ leg, which, of course, would come into play at the end of the match.

There was a spot during the match where Styles flirted with hitting Owens with the Styles Clash off the ring apron. I’m kind of glad they didn’t try that … yet … because that likely wouldn’t have ended well. But, overall, this match was all kinds of fantastic and we’ll definitely be seeing a rematch before long.

After Styles hit Owens with the Phenomenal Forearm on the outside, he set up for a Styles Clash through the announce table. Only Owens was two steps ahead of Styles, and wound up trapping his leg inside a hole in the announce table where a television was conveniently removed from. Styles tried to get out, but his leg was trapped, allowing Owens to get back into the ring and the referee count to ten to count Styles out.

This was absolutely a fantastic finish and sets up another match down the road, which could even main event an upcoming pay-per-view. I want this feud to last through the entire summer because we’ve just seen the tip of the iceberg of what these two can deliver together.

Luke Harper defeated Erick Rowan by pinfall via a clothesline

Well, these guys are both talented but had the unfortunate task of following up a gem in Owens/Styles. But they did a good job, all things considered. Harper got the win after Rowan basically ran into both of his arms, which Tom Phillips described as a “clothesline.” OK, Tom. Whatever you say.

Jinder Mahal defeated Randy Orton © by pinfall via The Khallas

The crowd was really into this one, even beginning dueling, “Let’s go, Jinder! Jinder sucks!” chants.

There were a few moments during the match that many wouldn’t have blamed the referee had he called for a disqualification, especially the spot where the Singh brothers pulled Mahal out of the ring after an RKO. Orton then went ham on the brothers, sending them through announce tables, or at least he tried to. He then hit both of them with his patented DDT through the ropes at the same time, but backed right into The Khallas, which is basically a Cobra Clutch slam. Mahal pinned Orton for the three, and there were many different reactions throughout the wrestling world.

In the Chicago crowd, WWE knew there would be many shocked faces, and they made sure to have their cameras ready to take the crowd’s reactions in, maaaaaaan. And it was glorious.

Overall, very good pay-per-view. Owens/Styles, Nakamura/Ziggler and Mahal/Orton were the best matches on the card.

I can definitely get behind a Breezango tag team title run. Those guys are the main reason to watch the tag team division right now.

I feel bad for Harper and Rowan, but hopefully their feud gets better and the writing becomes more and more built around their past instead of just a random feud where Harper “left the family.” In fact, I wouldn’t mind them reuniting and going after the tag team titles on SmackDown. They’re a strong team together, so why not?

Having Lynch tap out to Natalya was all sorts of confusing. Unless it’s the beginning of Lynch’s heel turn, which she could probably use at this point in time. That ending was pretty weak.

Zayn got a win, but over Corbin. Not sure that’s best for business, especially with Corbin needing to maintain a high profile status on SmackDown through the summer into the fall.

Mahal as WWE Champion will definitely be more interesting than the time Orton’s had the title since WrestleMania. I’m very intrigued to see how he does with this opportunity. Rusev isn’t far behind, either.