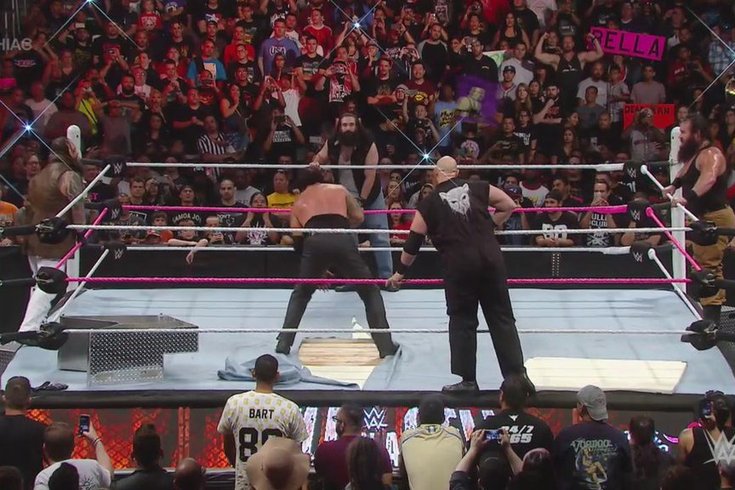 After his Hell in a Cell match with Brock Lesnar, Undertaker had to fight off an attack from the Wyatt Family. Except he wasn’t able to.

The Staples Center in Los Angeles went to hell and back on Sunday night. With two Hell in a Cell matches on tap that were promised to end their respective feuds, a WWE World Heavyweight Championship match along with four other title matches, WWE was looking to end October on a high note after a couple subpar months after SummerSlam.

A surprise return opened the main card, which caught me completely off-guard. It’s nice to be surprised a few times in professional wrestling, and it’d been a while since we had that feeling. I’m glad WWE threw us that bone. I also think all the winners made sense, so there was no head-scratching outcome that left me wanting to yell into the abyss.

Let’s go over what happened Sunday night in L.A.:

This was a rematch from Raw last Monday, so I wasn’t really looking forward to it. Cesaro’s performance alone was reason enough to catch the preshow simply because of how awesome he was when he was tagged in. With a big boot to Sheamus, uppercuts, a big boot, and flying crossbody block to Barrett to taking out Rusev, the crowd was hot for Cesaro. He needs to be pushed – this is his time. Will Vince and co. listen? In my opinion, they have to.

Ziggler would hit Barrett with a superkick into the Cesaro Swing, and then Neville hit the Red Arrow to notch the win for the good guys.

In one of the biggest shockers in recent memory, Alberto Del Rio made his return to WWE over a year after being released. Not only was his return a shocker, but so was the person who introduced him for obvious reasons. Zeb Colter, who’s been off television for months while dealing with some health issues, came out and my immediate thought was the return of the “Real American” American, Jack Swagger.

Luckily, that wasn’t the case. Zeb cut a promo basically saying he’s thinking outside the box now, which basically translates to him not being 100 percent pro-American anymore. But, this was good.

Del Rio looked good in his return, even somehow Tweeting during the match that he was happy to be back in WWE.

The end of the match came somewhat abruptly, as Del Rio hit Cena with the superkick, one of Del Rio’s usual moves, but there was no kickout. Del Rio had returned and conquered the United States Champion.

This match was also advertised as being the final encounter between both men, which began back in June when Wyatt attacked Reigns, preventing him from winning the Money in the Bank briefcase.

There were quite a few big spots during the match. Reigns brought out a table, but Wyatt put him through it with the Rock Bottom off the apron, which was really awesome according to the crowd. Reigns would answer with a powerbomb through a table that Wyatt conveniently set up.

Reigns would eventually spear Wyatt through a third table off the ring apron to the outside. After Wyatt looked to gain the upper hand and put Reigns away, Reigns countered and hit the spear for the win.

There was no dancing for The New Day before the match, but there was probably a big #BOOTY party in their locker room afterwards. I thought the Dudleyz had a great chance to win here since the two teams have been in a feud for a while now, but that was not to be. The match was okay, nothing great, but I honestly think this should have been the match the Dudley Boyz won back the titles. Now, I’m not sure where they go. They need something new. They can’t keep having these matches without a title change.

Kingston hit Bubba Ray with Trouble in Paradise and got the victory.

Charlotte and Nikki tried a reverse hurricanrana, but Nikki couldn’t flip over completely, and I really can’t blame her. She just cannot take those bumps regardless of how hard she tries. On the outside of the ring, Nikki hit Charlotte with an Alabama Slam on the side of the ring which looked stiff as hell, and then got her in the ring to what looked like a Rack Attack attempt for the win, but Charlotte countered into the Figure Eight and Nikki couldn’t hold on. Great finish here.

The stipulation involved in this match was that if Kane lost, then Corporate Kane would be relieved of his duties as WWE’s director of operations.

A lot of people, including myself, figured there would be some sort of ending that had Kane winning by disqualification, so Corporate Kane would be able to keep his job, but that wasn’t to be. I’m not complaining. After a so-so match, Rollins picked up the win with the Pedigree.

I’m a little annoyed that this match was what it was. I expected more out of both performers, because the feud was built up well and made sense. This didn’t feel like a championship match at all. Not that Kane should be in any title matches at this point, but I thought Rollins would come off looking a little bit stronger. He didn’t.

Interesting match placement for this one, but with good reason. Since his program with Cena, I haven’t been impressed with Owens. I think that’s mainly because he hasn’t really been given an open mic like we were used to seeing during his feud with Cena, but I’ve come to learn that’s okay. As long as he’s booked like he has been lately, nobody should have a problem with how he’s been used on the main roster.

This match wasn’t great by any means, but it gave Owens more credibility with a clean win over Ryback. Owens hit the pop-up powerbomb and took home a victory.

Hell in a Cell

Brock Lesnar vs. The Undertaker

I thought the Reigns-Wyatt match earlier in the night was really good, but this match has it beat tenfold. There was a lot of blood and violence, something not seen much on WWE television since 2008. This was the perfect story, with both men pulling out all the stops in their final battle – and yes, it was their final battle.

STEEL STAIRS TO THE SKULL by @BrockLesnar! #HIAC #Undertaker pic.twitter.com/Z5JLfT7Hv6

A SECOND F5 BY @BROCKLESNAR, but The #Undertaker still kicked out! #HIAC pic.twitter.com/dWBUF6jqFx

From Lesnar taking apart the mat revealing the hardwood beneath to Undertaker tombstoning him on it and Lesnar kicking out to the eventual conclusion, where Lesnar hit the F5 for the win, the ending of the match was absolutely epic. I don’t think there could have been a better ending involving these performers than what was written. It was a great match and a great ending, and I really have nothing negative to say about it. Sure, you’ll find that elsewhere, but not here. Great stuff here.

Can The #Undertaker even get up after this? #HIAC pic.twitter.com/RIWeVgJI7V

After the match, Undertaker sat up and pointed to Lesnar as if to say, “You got me. You’re damn good, and you got me.” After struggling to do his trademark sit-up, but finally getting to his feet to the applause of everyone in the building, the lights went dark and that ominous music played. It was the Wyatt Family, and they had found their target.

The Wyatt Family, complete with Luke Harper, attacked the Undertaker, and no help was to be found. They carried him off, much like they did to his younger brother when they debuted a couple years ago. Hidden meaning? Maybe.

You’ll remember earlier this year, Undertaker and Wyatt fought at WrestleMania, with the Dead Man coming out on top. Is this revenge? Who knows? We’ll soon find out.

As a whole, the event surpassed my expectations. The surprise return of Del Rio coupled with him capturing the United States Championship and the two great Hell in a Cell matches, this event gets a solid thumbs up from me. The ending also leaves questions that are intriguing. When I first thought it was just Bray Wyatt coming in to attack the Undertaker, I wasn’t happy. But now that his entire family is involved, I think this is going to go somewhere good. At least I hope.

We’ll see you back here tomorrow for the Raw roundup!