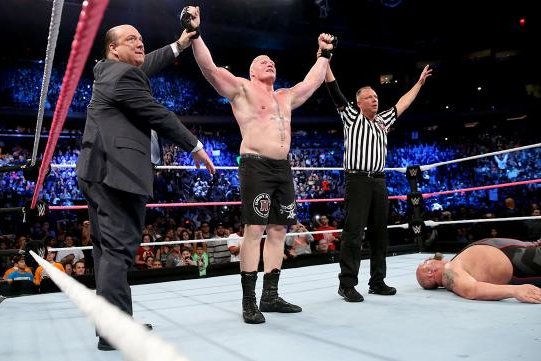 Paul Heyman raises the hand of his fighter, Brock Lesnar, follow his win over Big Show.

Brock Lesnar took on the Big Show, pretty much annihilating him in the process, and Seth Rollins looked to re-capture the United States Championship from John Cena in a Steel Cage Match. The New Day defended their Tag Titles, and Chris Jericho made a rare appearance a couple weeks after making a surprise appearance at Night of Champions.

The atmosphere was great and exactly what it should be for an event like this -- dimmed lights, no fancy stage and no Michael Cole. I’ve got nothing against him, but he wasn’t needed for this show. They even had real mats placed around the ring – something you don’t see on Raw or SmackDown or pay-per-views anymore. It felt like an intimate show, and that’s a good thing.

Here’s what went down Saturday night:

Randy Orton and Dolph Ziggler vs. Sheamus and Rusev

These four competitors were originally scheduled to compete in singles matches against each other, but someone thought it was a good idea to just throw them all together in a match. This was your typical house show tag match opener, which saw good action from each wrestler involved. Sheamus would run into a Ziggler superkick and then into the RKO, netting him and the Bulgarian Brute the loss.

After the match, Rusev lambasted Sheamus on the mic and said he could’ve beaten Ziggler and Orton by himself. Sheamus responded with a Brogue Kick, and then told Rusev to kiss his arse. Interesting.


Finally a legitimate singles match between these two as they’ve been feuding for months now. It was a good match, but nothing special; except for maybe when Stardust stole Neville’s robe and failed in spectacular fashion to do his own version of the Red Arrow. Neville gets the win with the real Red Arrow.

I’m still not sure why we have Paige going back and forth with Charlotte and Becky – Team P.C.B. should be completely disbanded at this point. It’s as if Paige’s promo a few weeks ago on Raw doesn’t mean anything now. It’s ridiculous.

Charlotte got Nikki in the Figure Eight but Paige tagged herself in, inciting an argument between the two teammates. Paige would then be alone against the Bellas and Fox, as both Charlotte and Becky jumped off the ring apron when their partner went for a tag. Nikki hit the Rack Attack on Paige for the win.

Your winners: The Bellas and Alicia Fox

Paige eviscerated her teammates and said she would never leave them hanging like they did to her. She said she doesn’t know how she’ll forgive Charlotte and Becky. This is completely unrealistic and stupid at this point.


This was a pretty good match, but we’re just going to forget Jericho ever appeared at Night of Champions and had a small dustup with Dean Ambrose. That’s fine, though, because a match with Kevin Owens is a treat to the fans.

This was a good back-and-forth match, and there was one of those close finishes that almost saw Jericho capture his 10th Intercontinental Championship. After hitting Owens with the Codebreaker, Jericho thought the title was his, but Owens grabbed the rope before three to break the count. Jericho would eventually apply the Walls of Jericho, but Owens would rake his eyes and roll him up to retain his title.

I’m tired of the whole Xavier-Woods-comes-in-to-cause-a-DQ finish that’s all too familiar in New Day matches. We’ve seen this before, so why not come up with something new and fresh? The New Day deserves better.

This should set up another rematch between the two, but something will have to be done about Woods being at ringside. Woods ate a table again, which I guess is supposed to send the fans home happy. Give the New Day and Dudleys a little bit more.

Most of you don't know what it feels like to wake up a champion, but it's euphoric! I'm going back to sleep just to wake up & feel it again!

Your winners, but NOT WWE Tag Team Champions: The Dudley Boyz by disqualification

Very awesome stuff here. I was vindicated. This match was cool because Lesnar gave Show four german suplexes and then the F5 for the win. Then a bonus suplex and F5 afterwards. Awesome.


These two have never had a bad match together, so I was really looking forward to this one inside the cage. Of course, I knew Kane had to make an appearance, and he did.

After a hard fought, tough fight between Rollins and Cena, the WWE World Heavyweight Champion thought he would go to the top of the cage and try a frogsplash onto Cena – after Kane’s music had hit and the Demon entered the arena. No such luck for Rollins.

Cena hit the Attitude Adjustment and picked up yet another win against his rival.

As good as the matches are between these two, it seems like Cena has a 95% winning percentage. That’s not exactly building new stars. However, I understood the reasoning for this match and how it would only be used to further a Rollins-Kane storyline after the WWE Network picked up the show, so I’m not terribly disappointed.

.@WWERollins missed the #FrogSplash off the top of the cage, resulting in an AA and the WIN for @JohnCena! #WWEMSG pic.twitter.com/4ndQNg4WfN

Overall, I think this was a pretty good show from a house show perspective. It furthered a couple storylines, although if you missed this show, I’d say you didn’t miss much. The action was good, and it felt like a big event, which just added to the atmosphere. We’ll see how Raw compares on Monday night.