WWE Raw: Did we see a tease of a Shield reunion? 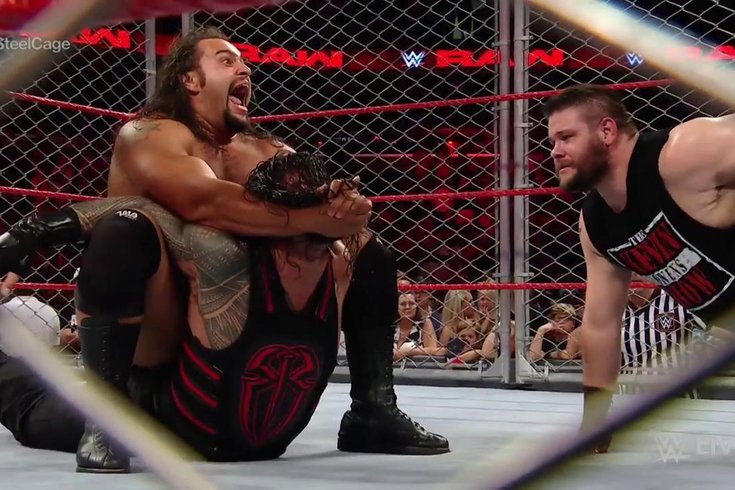 Roman Reigns was saved by the unlikeliest of people on Monday night during a 2-on-1 beating.

The final Raw before Sunday’s Clash of Champions pay-per-view invaded the FedExForum in Memphis, Tenn. on Monday night, and it was also the debut of a long-awaited division to the red brand – the Cruiserweight Division.

While the debut of a new division was certainly a huge part of this edition of Raw, I still couldn’t help but switch back and forth between Raw and the Eagles vs. Bears Monday Night Football game.

Just as much as I love these cruiserweights. And we were introduced to the roster as well as a Fatal Four Way match to determine the No. 1 contender for TJ Perkins’ title.

Stay tuned later this week for my in-depth Clash of Champions preview.

Rollins and Rusev face the consequences

The opening of Raw began somewhat on a swivel. Roman Reigns came out, but then so did commissioner Stephanie McMahon. Then came along general manager Mick Foley.

Knowing Reigns would likely ask for a rematch against Owens, the GM said he needed to make up for what he felt was his fault last Monday with the interference during the main event. He put Reigns and Owens in a steel cage match – yeah, the type of match that used to be used to settle long, drawn out blood feuds – and put Seth Rollins in a match against Rusev in a non-title bout.

Rollins and Rusev would pair off in the first contest of the night. However, the match would not have a winner nor a loser as both combatants were counted out. This erupted into quite the brawl, as Rusev went for a powerbomb on Rollins, but the crafty veteran was able to counter and hit a crossbody block off the stage onto the Bulgarian Brute.

I could see these two men feuding in the future.

Rollins saves Reigns from a 2-on-1 beating

The main event of the evening pitted the WWE Universal Champion against his foe from exactly seven days ago. Owens and Reigns, while not exactly a feud screaming for a cage match, delivered a good television main event and ended in a way that makes the audience intrigued as to what will happen Sunday at The Clash.

Reigns won by escaping the cage but was attacked by his opponent Sunday, Rusev. Both Rusev and Owens demolished Reigns inside the cage before an unlikely ally for Reigns showed up.

Interestingly enough, Rollins’ music hit and he climbed the cage, beat down both Rusev and Owens before flying onto both of them from the top of the cage.

In actuality, he saved Reigns from a beating. He’ll have his shot at the WWE Universal Championship on Sunday, but I wonder if this is the beginning of the tease of putting Rollins and Reigns back together as a hybrid edition of The Shield.

The Cruiserweights are here

September 19, 2016 was a night that will live in Monday Night Raw infamy. Or something.

Rich Swann, Gran Metalik, Cedric Alexander and Brian Kendrick were all announced by Foley, who then booked Fatal Four Way Match for the No. 1 contendership to TJ Perkins’ Cruiserweight Championship. And if this match was anything like what we’ll be seeing each Monday night, then we’re in for something special.

The sixth match between Cesaro and Sheamus occurred Monday night. Heading into the match, Cesaro had won two in a row to make the series 3-2 after Sheamus won the first three contests.

Last Monday, Cesaro won with some underhanded tactics, if you will, hooking the ropes with his feet. This week, Sheamus looked for some revenge and a championship opportunity, as well.

It looked like he had it locked up after hitting White Noise on Cesaro onto the hard-edged ring apron, but Cesaro wouldn’t stay down. He was able to bounce back and hit the Neutralizer on Sheamus to even the series at three wins apiece.

Sasha Banks and Bayley may be friendly rivals, but they certainly won’t be friendly Sunday night at Clash of Champions in the Triple Threat Match for the Raw’s Women’s title currently held by Charlotte.

The two would tag up on Monday night to face the champion and Dana Brooke, who’s still around for some reason despite getting treated ruthlessly terrible by Charlotte. But this time, it paid off.

Brooke helped Charlotte counter a Bayley-to-Belly, allowing the champion to hit Bayley in the head with a kick and pin her. While that was good for Charlotte heading into this weekend, something tells me we won’t be seeing her retain her championship after Sunday.

Ah, you gotta love Chris Jericho. He’s on one of the best runs of his career the last few months, and his “List of Jericho” segment was just another brilliant masterpiece. Until everybody started coming out and the segment wound up turning into a 10-man tag team match.

• Braun Strowman d. Sin Cara by pinfall via a powerslam.

• Bo Dallas d. Gary Graham by pinfall via the Roll of the Dice.

• No. 1 Contender’s Fatal Four Way Match for the Cruiserweight Championship: Brian Kendrick d. Gran Metalik, Rich Swann and Cedric Alexander by submission after locking in the Captain’s Hook on Alexander.