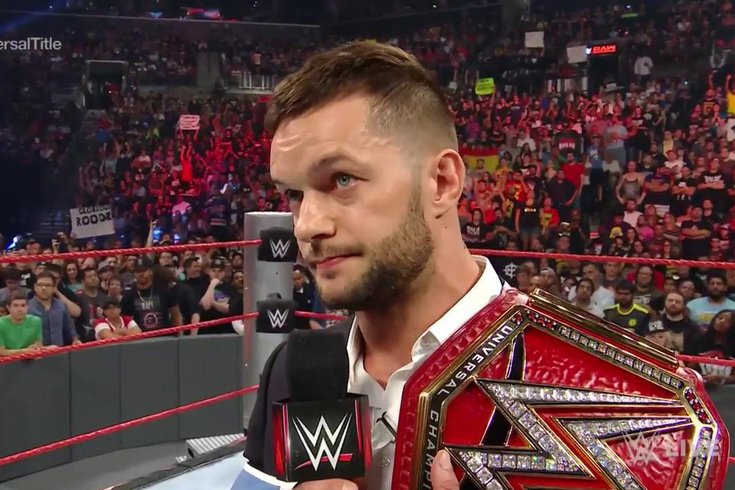 Finn Bálor had to forfeit the WWE Universal Championship not even 24 hours after he won the title at SummerSlam.

Not even 24 hours after becoming the first-ever WWE Universal Champion, Finn Bálor had to relinquish the title at the beginning of Monday Night Raw due to a shoulder injury suffered during his SummerSlam match against Seth Rollins on Sunday night.

Before Raw took the air from the Barclays Center in Brooklyn, N.Y., WWE ringside physician Dr. Chris Robinson noted that Bálor dislocated his shoulder but was able to pop it back in place in an interview with WWE.com. An MRI on Monday showed a possible labrum tear, according to Robinson, and on television, it was reported Bálor would have to undergo surgery and miss six months.

Here’s the move that caused the injury to Bálor. Warning: You can see him pop his shoulder back into place shortly after impact.

I like the fact that they’re wasting relatively little time in crowning a new champion because Raw’s next pay-per-view, Clash of Champions, is set to take place on September 25th. That’s a long time without a champion for the Raw brand.

Let’s find out what happened on the third straight day of WWE action from Brooklyn:

The show opened with Foley and McMahon in the ring, awaiting the entrance of Bálor. He came out with a sling on his right arm and the championship on his left shoulder. He soaked it all in as he slowly walked towards the ring and once he was finally in the ring, letting the crowd tell a story for a change.

Bálor said that he’d be back and the first thing he’s going after is the Universal Championship. As it should be.

As Bálor left the ring and headed backstage, Rollins’ music hit and he came out and laughed at Bálor, setting the stage for what’ll be an amazing match when Bálor returns. Rollins got in the ring and said they should have another championship celebration for the true WWE Universal Champion – himself.

But Rollins wasn’t the only one who would make his presence felt. Sami Zayn, Chris Jericho, Kevin Owens, Enzo Amore and Big Cass, and Roman Reigns all made their way to the ring to stake their claim.

We found out that the winners of the four matches Foley put together would tangle in a Fatal Four Way match on Raw next Monday.

With those eight men all in the mix, the series of matches was very good, but I wasn’t impressed with one particular finish. Rusev, who was wearing some bandages around his ribs due to Reigns’ attack from SummerSlam, decided he’d rather get counted out in his match against Big Cass and not have a chance at the WWE Universal Championship next Monday night.

It just didn’t make sense. He’s United States Champion – is that enough for him? And if it is, why? It didn’t make him look like the pure winner he proclaims to be.

In another match, Rollins defeated Zayn. Zayn suffered an ankle injury in the match – which looked to be all part of the act and not a serious injury – and that helped Rollins gain a victory after hitting the Pedigree on Zayn.

He let the fans know how he felt during the commercial break afterward.

As an aside on Rollins – he’s getting a lot of hate due to his running powerbomb spot. It injured Sting last September at Night of Champions and Bálor on Sunday night. He also broke John Cena’s nose with his knee. But, that stuff happens. There’s a fine line between performing moves to be safe and also performing them to look real. Rollins isn’t to blame for any of that. Fans think that he’s “unsafe” and needs to tone it down are the same fans that complain when moves look unrealistic and the wrestling in-ring product isn’t smooth. Rollins is a smooth worker. He’s had thousands of matches. The spotlight shines more on him now because he’s the lead runner in WWE right now. So, I get it.

But Rollins isn’t the problem. Sure, maybe that running powerbomb spot could be handled better, or completely done away with, but that’s not Rollins’ fault. He even teased doing the same spot to Zayn during their match, and that was awesome. The crowd came alive for that. Rollins is a great performer and don’t forget it.

Owens defeated Neville via a swinging neck breaker. What happened to the Pop-Up Powerbomb? Neville wasn’t one to come out during the opening promo, so having this match as part of the Universal Championship Series was a bit odd. It was a good match, of course.

Big Cass defeated Rusev by countout in the third match. This finish was odd. The United States Champion has a chance at becoming the Universal Champion, but Rusev decided to leave the ring and get counted out because the pain in his ribs was just too much. That’d be cool with me if nothing was on the line. But a chance at the biggest title on Raw was the prize. That clearly means nothing to Rusev.

I’d like to see them play off that a bit and have Rusev continue to say he’s the only champion on Raw worth anything and continue to hold the United States Championship as more important than the Universal Championship. Maybe then I won’t be that hard on that finish.

In the main event, Reigns took on Jericho. Owens came out to try and help his tag team partner, but we didn’t see an appearance from the United States Champion. Maybe Rusev was busy selling his rib injuries too much to worry about Reigns. Who knows. Reigns won after spearing Jericho to set the stage for next week’s WWE Universal Championship Fatal Four Way match: Reigns vs. Owens vs. Rollins vs. Big Cass.

Charlotte and Dana Brooke celebrated her winning the WWE Women’s Championship for the second time on Monday night with Brooke holding a “Where’s the Boss?” sign. Banks is currently out with a back injury, but expects to be back soon.

And that’s when the Raw general manager stepped in. Foley said that Banks would get her rematch when she returns, but he also announced that Raw had signed the hottest free agent.

After months of fans clamoring for her call up to the main roster, many dreams were realized on Monday night. Bayley is here to stay on the main roster and in her first match on Raw, she defeated Brooke with a Bayley-to-Belly.

Will we see Bayley challenge for the Women’s Championship before long? I’d say there’s a good chance we do.

Bubba Ray and D-Von Dudley announced on Twitter a few hours before Raw took the air that they were going to say goodbye to the WWE Universe and retire Monday night. WWE saved the segment for 10:30 P.M. ET, so I wasn’t exactly buying that the Dudleys would be retiring. Call me old-fashioned, but with the type of send-offs they’ve given to true legends in the business, the Dudleys deserve more than just a 10:30 spot before the main event.

Bubba Ray and D-Von thanked the crowd and had the crowd thank themselves for making the Dudleys. Without the fans, the Dudleys are nothing, D-Von said.

Primo and Epico, the Shining Stars – who were in need of a major kick to get the audience to care about them – interrupted the end of the “ceremony” and offered a pair of tickets to Puerto Rico for a retirement trip.

For their troubles, Primo was hit with a 3D and Epico hit with the Wassup headbutt from the top rope by D-Von. As they were set up a table in the ring and were ready to hit Epico with a 3D through it, Gallows and Anderson inexplicably attacked the former 10-time WWE Tag Team Champions. They took out Bubba Ray on the outside and put D-Von through the table with the Magic Killer.

Something tells me this isn’t the end of the Dudley Boyz. This could have been a way to turn them back into babyfaces – because they’ve been heels for quite a while, though nobody seems to remember that – and engage in a feud with Gallows and Anderson moving forward. That could be great for both parties involved.

As for the Shining Stars? Well, maybe they need a little more polish.

After the show went off the air, Bubba Ray tweeted the following, making it seem like the Dudleys really are done.

Our work here is done. THANK YOU to @WWE @WWEUniverse and "the boys". Was our pleasure to see all of you again. See ya down the road. #RAW 🤓

PW Insider reported last month that the duo had agreed to one-year extensions on their current WWE contracts. Stay tuned.

• Big E took down Karl Anderson with the Big Ending in his return to in-ring action, but there was very little said about the WWE World Tag Team Championships. They still do exist. I swear. And even though Gallows and Anderson defeated the champions at SummerSlam via disqualification, there was no mention of them getting a rematch on Monday night. They should. But now with Gallows and Anderson focused on the Dudleys, that rematch might not happen anytime soon.

• Titus O’Neil tried his best to create a great promo, but he just couldn’t find the words to do so. He called out Darren Young, but got his life coach, Bob Backlund, instead. Backlund locked in the cross-face chicken wing on O’Neil for a couple seconds before O’Neil countered and bodyslammed Backlund. Young came in and got a Clash of the Titus for his troubles. Great feud.

• There was one mention of Brock Lesnar’s actions from SummerSlam on Monday night. There was no Lesnar in attendance, nor Heyman. After Lesnar gave SmackDown commissioner, Shane McMahon, an F5, the Raw commissioner said, “there will be repercussions,” when referring to The Beast. What exactly those repercussions will be is anyone’s guess, but it won’t surprise me if they play up this Raw/SmackDown feud and don’t really punish Lesnar in the storyline.

• The Cruiserweight Division will officially begin on the September 19th edition of Monday Night Raw. Brian Kendrick, TJ Perkins, Rich Swann and Noam Dar were all featured in the promo, so bank on them being signed to WWE contracts already. Cedric Alexander will also reportedly be in the division as reports are floating that he’s signed a WWE contract.

• I’m digging Cesaro’s outright bluntness. He dropped some news in this video. He and Sheamus are competing in their best-of-seven series for a shot at the WWE Universal Championship.

• Bayley d. Dana Brooke by pinfall via the Bayley-to-Belly suplex.