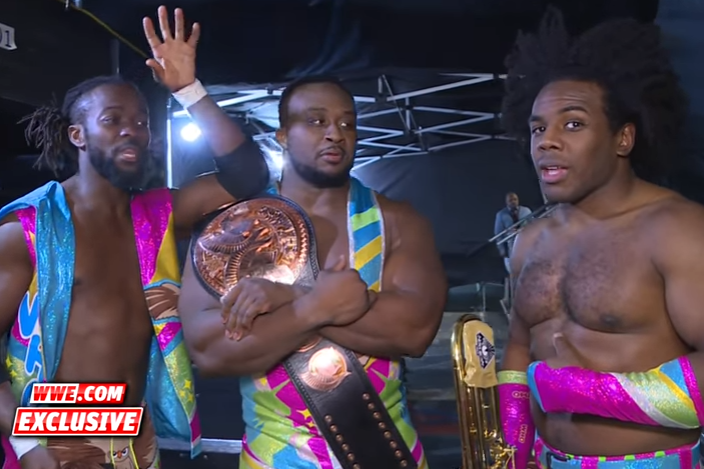 Four tag teams had a shot to dethrone The New Day on Monday night. But the champions overcame the odds … twice.

Philadelphia was the epicenter of the WWE Universe on Monday night, as Raw invaded the Wells Fargo Center. Just six days from the brand’s next pay-per-view, Roadblock: End of the Line, the Philly faithful were treated to a show that revolved around the brand’s tag team championships.

Even though Sasha Banks and Charlotte Flair didn’t make a live appearance - at least on television - I thought the show was as good of a go-home to a pay-per-view show as one could get in December.

The show opened with the Triple Threat match for the Raw Tag Team Titles, where New Day was looking to make history and surpass Demolition for the longest tag team title reign in WWE history. Cesaro and Sheamus along with Luke Gallows and Karl Anderson were vying to make history by preventing history.

It certainly was a hot opener and the crowd was very into it. They even were cheering Sheamus, who one year ago was WWE World Heavyweight Champion and one of the most boring characters on television. Kofi Kingston made a bling tag on Anderson, who was hit with the Brogue Kick by Sheamus. Kingston then hit Trouble in Paradise to retain the titles for his team.

Backstage, the celebration was on, but things got a little out of hand when Raw commissioner Stephanie McMahon got champagne sprayed all over her in the midst of it. To punish the champions, she made Kevin Owens and Chris Jericho, at the behest of Owens, challengers to the champions, who would have to defend their titles again. More on that later.

Philly got to enjoy the return of Seth Rollins’ “Rollins Report” where his special guest, WWE Universal Champion Kevin Owens, was supposed to let him know if he planned on interfering on Jericho’s behalf this Sunday at Roadblock: End of the Line. The friendship between Jericho and Owens has been rocky in recent weeks, and this wasn’t exactly a segment that made a lot of sense from Rollins’ standpoint. Yeah, heels are going to be totally honest. OK.

Owens did make his entrance, but didn’t head down to the ring. Instead, he got his own stool from backstage and brought it out onto the ramp. He announced officially that he and Jericho would face New Day for the tag titles in the main event. Jericho came out and didn’t look excited, but he didn’t look upset, either. He and Rollins went back and forth until Jericho and Owens wound up storming the ring and began dismantling The Architect. Reigns came out for the save.

Later in the show, the Raw general manager gave Rollins and Reigns the same opportunity that McMahon gave Jericho and Owens and added them to the main event to make it a Triple Threat match for the tag titles … again.

And man, was it a good one.

In one of the better main events since the brand extension, New Day, Rollins and Reigns, and Owens and Jericho all put together a great match. The ending sequence was fantastic with Jericho and Owens hitting the Pop-Up Powerbomb into the Codebreaker, and then Rollins pushing Owens into Jericho to break up the pin, to Rollins then hitting Jericho with the Pedigree to Big E preventing him from making the cover so Woods could slide over for the pin. It was done so well and almost seamless.

After the match, Jericho and Owens argued, but Jericho saw that Reigns was lining up Owens for a spear, so he slowly left the ring to leave Owens in the spear’s path. The show ended with Reigns standing tall with the United States Championship and WWE Universal Championship held high.

After the show, The New Day went down memory lane.

Some thought the final chapter to the Banks-Charlotte feud was at Hell in a Cell. But then they continued having matches, and many thought the last match the two had on Raw, a Falls Count Anywhere match for the Raw Women’s Championship, would be the last match.

Sunday night, this absolutely needs to really be the “end of the line” for this feud. These two have really good matches together, but it’s over. This has to be it.

How good is WWE at making video packages, though?

Cruiserweights start to gain some momentum

Before Raw went on the air, it was announced that WWE Cruiserweight Champion, Rich Swann, would defend his championship against TJ Perkins and Brian Kendrick in a Triple Threat match. Monday night, the two challengers would battle in a pretty good match with Kendrick coming out on top.

In earlier Cruiserweight action, Ariya Daivari got a disqualification win against Lince Dorado after Jack Gallagher came out, announced that he would partake in some shenanigans and interfere in the match, being the gentleman he is, and wound up attacking Daivari.

Sami Zayn still wants a match with Braun Strowman. A few weeks ago on Raw, Strowman completely demolished him, so the Raw general manager had to stop the match. Since then, Zayn’s been wanting a rematch with the big guy. And Foley’s been denying it.

Things came to a head on Monday night. Zayn said he wanted a rematch with Strowman or he wanted to be traded to SmackDown. Foley obliged his request, and after Zayn’s win against Jinder Mahal, the general manager informed him that he’d been traded for someone of “equal value” from the SmackDown brand. That’d be Eva Marie.

You see, Marie’s character is that she doesn’t want to wrestle and finds a way out of matches. Well, that was her character before she was suspended back in the summer. Her suspension has been up for a while but she’s yet to make her return to television. But I digress.

Zayn, conversely, wants to wrestle and is being told no. Upon hearing Marie was traded for him, he blew up. He got in Foley’s face and that’s exactly what the general manager wanted. He told Zayn to remember the anger he feels and to channel that into his match with Strowman this Sunday night at Roadblock. He’ll be given 10 minutes in the ring and I guess he’ll come away with a victory if he can last that long with Strowman.

WWE announced to the live crowd at the Wells Fargo Center that it will return to Philly on March 27th, six days before WrestleMania 33.

• Bayley d. Alicia Fox by pinfall via the Bayley-to-Belly suplex.