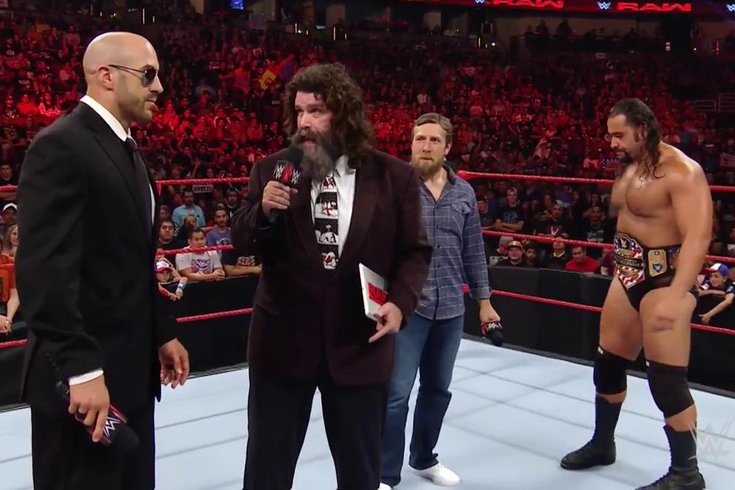 Cesaro and Rusev battled for the United States Championship in a quickly put together main event.

With two weeks left to go until SummerSlam in Brooklyn, WWE brought Monday Night Raw to the Honda Center in Anaheim, Calif. this week. While this episode of Raw seemed even lesser on par with the show from last Monday, it was still an okay show. It wasn’t bad. It just wasn’t great. It was barely good.

Sean “Puff Daddy” Combs was a guest star at Raw, but only appeared during a backstage segment with Raw general manager Mick Foley, Xavier Woods and Kofi Kingston. Waste of a guest appearance? You got it.

Luckily, though, Combs’ appearance was neither a hit nor miss for WWE. It was just kind of there.

Enzo Amore and Big Cass opened the program with a huge ovation from the Anaheim crowd. I’m pretty sure the reaction for these guys gets louder and louder every week. Amore did his usual mic work and got the crowd hyped up, but as he called out Chris Jericho for last Monday on Raw, Y2J made his way out and wound up being joined by Kevin Owens. The two and Enzo and Cass had a very entertaining promo that ended in Jericho and Amore going one-on-one.

Owens was great throughout the match on the outside taunting Amore and even Cass who was on the other side of the ring. Owens got a good lick into Amore and Jericho would wind up hitting the Codebreaker on him, but before he would go for the pin, Cass came in and gave Jericho a big boot causing the disqualification.

After the match, Cass grabbed the mic and challenged Jericho and Owens to a tag team match at SummerSlam in their Brooklyn backyard. JeriKO accepted the challenge.

The United States Champion Rusev and his newlywed wife Lana celebrated their marriage in front of the Anaheim crowd with a nicely decorated ring and some wedding cake.

Roman Reigns’ music hit and he came out and wanted to be Rusev’s Best Man. He gave a toast that questioned exactly how manly Rusev was, and the Bulgarian Brute had had enough. During the fracas, Lana was accidentally shoved into the beautiful wedding cake that was set up in the ring.

New meaning has been given to the term #Bridezilla! #RAW @LanaWWE pic.twitter.com/ko3KfwyA9c

After a commercial break, Rusev was complaining to Foley backstage, and the general manager made a match with Rusev defending his United States Championship against Reigns at SummerSlam.

And Lana wants her revenge.

Rusev and Cesaro get a main event spot

In a weird segment for the main event, Foley had offered the chance for SmackDown Live general manager Daniel Bryan to come on the show and they both wound up “apologizing” for Randy Orton and Brock Lesnar respectively taking out the other on each of their shows. Foley then admonished Daniel for making fun of the “Universal Championship” that Raw will hand out at SummerSlam.

Foley said the fans deserve a Raw champion, and that’s when the United States Champion Rusev came out to address both general managers and said he would crush any SmackDown guy that would dare come on Raw again. Bryan accused Rusev of sucking up to Foley and the champion retorted, saying he was going to crush him. Cesaro, who already beat Sheamus earlier in the night, came out and wound up challenging Rusev for his United States title in the main event.

Despite the hastily arraigned way the match was put together, both wrestlers provided the audience with a really good match. Sheamus would run down to the ring to try and distract Cesaro, so I guess we haven’t seen the last of their “feud” even though Cesaro has now defeated Sheamus twice. Rusev won with a kick to Cesaro’s head after Sheamus nailed him with a Brogue Kick.

Yeah, definitely no time to get out of the way or anything #Raw pic.twitter.com/2PN7SHWW8q

Reigns speared Rusev in the aisle after the match after what seemed like an eternity of the Bulgarian Brute waiting for it.

The former WWE World Heavyweight Champion and possibly the first-ever WWE Universal Champion, Seth Rollins, came down to the ring for a promo with all eyes on him. There was no Finn Bálor in the arena on Monday night, so it was Rollins’ time to shine. At least for a few minutes.

Rollins called Bálor pretty much a fake person whose identity into whom he really is didn’t compare to him because he truly was the legend. Rollins talked about how he rode in on his white horse and slayed the beast [Lesnar], how he crushed the face that runs the place [Cena], and how he conquered the Roman Empire [Reigns]. He said he’d add to his legend at SummerSlam after beating Bálor for the new Universal Championship.

Bálor would respond later in the program with a pre-taped promo that gave insight into what his legend really means. We found out the meaning behind “Finn” and the meaning behind “Bálor” and why he becomes The Demon. It was really well put together and gives another added layer to the SummerSlam match and builds this feud even further. WWE has made Bálor’s ascendance into the main event of WWE a huge part of SummerSlam.

NEXT WEEK: @WWERollins plans to call out the #DemonKing @FinnBalor on the final #RAW before @SummerSlam! pic.twitter.com/543tXpbxdN

WWE is advertising Rollins calling out The Demon next Monday on Raw. That will be a site to behold.

After a nice little skit where they were posing as doctors and informing the audience of “Ringpostitis,” Luke Gallows and Karl Anderson were all business against Kofi Kingston and Xavier Woods on Monday night. With Big E out selling the injury from last week, Gallows was able to notch a victory against Kingston after hitting him with a reverse Samoan drop.

The duo tried to give Kingston a case of “ringpostitis,” but Woods made the save with a steel chair.

Lesnar and Orton: 15 years in the making

WWE put together this awesome video package highlighting the career paths of both Brock Lesnar and Randy Orton. I wasn’t a fan of this match when it was first announced, but I’m sold now. I’m looking forward to this match way more than I thought I would a few weeks ago. Lesnar is expected to be on Raw next Monday.

• Was Combs’ appearance the least impactful in recent memory? It sure seems like it.

• Turnabout is fair play in WWE as Darren Young notched a win over Titus O’Neil the same way O’Neil defeated Young last Monday – by rolling him up and grabbing a handful of tights. Smooth.

• The Dudley Boyz lost to Neville and Sin Cara, and it didn’t look like Bubba Ray Dudley was too happy about it. Will we see a split coming soon? Stay tuned.

• Sasha Banks defeated Dana Brooke, effectively banning her from being in Charlotte’s corner at SummerSlam during the Women’s Championship match.

• Darren Young w/ Bob Backlund d. Titus O’Neil by pinfall via a rollup with a handful of tights.

• Cesaro d. Sheamus by pinfall via a rollup.

• Non-Title: Sasha Banks (c) d. Dana Brooke by pinfall after she hit Brooke with double knees in the corner. Brooke will be banned from ringside during Banks vs. Charlotte at SummerSlam.

• United States Championship: Rusev (c) d. Cesaro by pinfall via a kick to the head after Sheamus hit Cesaro with a Brogue Kick from the outside.