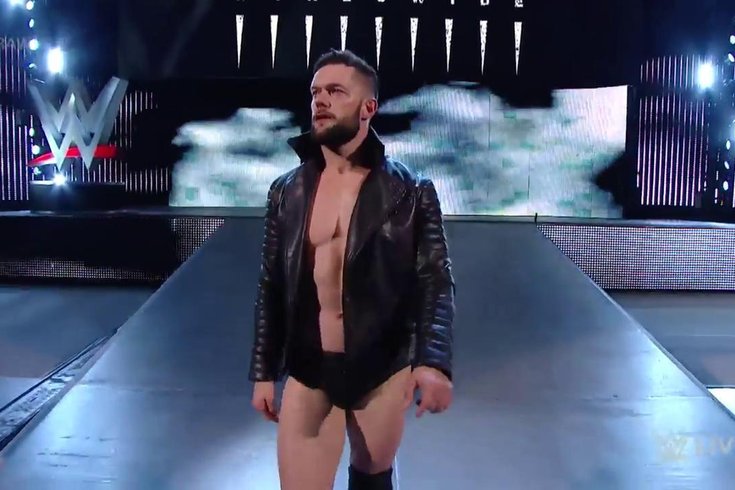 The official beginning of the brand extension occurred on Monday night at the Consol Energy Center in Pittsburgh, where Raw was reinvigorated with new theme music, a slightly new entrance set, the return of the red ring ropes and a new logo.

It wasn’t just the new theme, the new set, red ring ropes and new logo that made Raw feel somewhat different. It was the entire show, from top to bottom, that really made me sat back and wonder if this is legitimately a new era in WWE.

The Raw commissioner, Stephanie McMahon, and Raw general manager, Mick Foley, kicked off a new era of Raw by introducing the entire Raw roster that they drafted last week as they came on the stage in earnest to hear what they had in mind for Raw’s future.

Despite Dean Ambrose winning the Triple Threat Match at Battleground on Sunday, McMahon and Foley had planned a new title for Raw, called the WWE Universal Championship. I don’t like the name for the title, but I’m sure I’ll get over it. I’ve heard worse. And the powers that be wasted no time in giving nine Raw roster members the opportunity to fight for it.

Two Fatal Four Ways were booked with the following eight superstars: Finn Bálor, Cesaro, Kevin Owens, Rusev, Sami Zayn, Chris Jericho, Sheamus and Roman Reigns. Seth Rollins, being the overall first pick in the WWE Draft last Tuesday, and the guy who could have brought the WWE Championship to Raw, was given a bye all the way to the main event of SummerSlam. The winners of the respective Fatal Four Way matches would meet in the main event and the winner of that match would go on to Brooklyn to face Rollins for the inaugural WWE Universal Championship.

Everyone thought Reigns was the logical choice to win and head to summer’s biggest event as a co-number one contender with Rollins to the new title. I had an inkling something was off since he was pinned clean at Money in the Bank in June and Sunday night at Battleground. And my inkling was correct.

Bálor came out of the opening match, the first Fatal Four Way,, as the victor after hitting the Coup de Grâce on Rusev, which was surprising to many. With the emphasis placed on him in the draft, I had a feeling if he won the Fatal Four Way that he would have a big night.

That was an understatement.

The second Fatal Four Way match wasn’t nearly as good as the first, but it wasn’t bad, either. That was the story of Raw in a sense – every match was good or great. Well, except the enhancement talent matches. We’ll get to that later.

Reigns got the win after spearing Jericho in another solid match, and he’d meet Bálor in the main event.

The main event wasn’t a long match, and anyone can point to why. Last Monday night, the ending of Raw was continued on the WWE Network, so I had wondered if we would be treated to another such occurrence, maybe with WWE telling us to tune into the Network before the last five seconds of the telecast.

Alas, that wasn’t needed. Bálor and Reigns fought valiantly for their shot at the Universal Championship, and it looked like Reigns would Superman Punch his way to SummerSlam. But that didn’t happen.

Bálor kicked out of Reigns’ finisher, which is remarkable. Eventually, he would hit Reigns with the Coup de Grâce and pin him in the middle of the ring, becoming a No. 1 contender for the WWE Universal Championship.

It’s still unbelievable to me. I don’t think anyone’s had a more impactful debut in recent memory – maybe since 1996 when Scott Hall went to WCW. Sting’s WWE debut was great, but we’re talking about two entirely different eras here. Bálor is a major player on his first night on the main roster. He truly has arrived.

As for SummerSlam, the top two matches are already great. Anything involving Brock Lesnar to me is entertaining, and Bálor vs. Rollins could steal the show. And we don’t even know what the SmackDown main event will be at this point.

It definitely is a new era in WWE. We’ll see how long this era lasts.

At Battleground, Charlotte tapped out to the Bank Statement, which is Pro Wrestling 101 to build to a future match with the person who made her tap out. Banks, who many seemingly thought would face Charlotte at SummerSlam in August, was given a Women’s Championship match by McMahon and Foley on Raw. At first, I thought there would be some shenanigans leading to a rematch.

There were shenanigans, but not the kind I thought. Banks performed a great tribute to one of her idols, Eddie Guerrero, and threw the WWE Women’s Championship belt to Brooke, who caught it, and then Banks fell as the ref turned around in the ring to see Brooke with the belt and Banks on the ground. Naturally, he had assumed Banks was hit by Brooke with the belt, so he sent Charlotte’ protégé to the back. Banks gave her a sly smile before she left.

The match was fantastic even without that added layer, with Banks and Charlotte competing like it was WrestleMania. And that’s not a complaint, either. Banks was able to get out of the Figure Eight, and locked in the Bank Statement before the champion was able to roll over and get to the ropes. Banks responded by hitting Charlotte with a backstabber into the Bank Statement again and there was nowhere for Charlotte to go. She tapped out and Banks was crowned the new WWE Women’s Champion in front of a crowd that chanted, “You deserve it!” during a post-match interview in the ring.

I’m not sure what Pittsburgh did to deserve such a great show and the crowning achievement for Banks, but I’d like to know what they did. Hopefully, Philly’s in for a great SmackDown show when they come back to town in September.

As for Banks and Charlotte, everyone figured they would be on a collision course to SummerSlam. Now do we have rematches, or does Banks begin feuding with somebody else? Maybe Bayley?

A celebration of New Day proportions

The New Day, despite losing to the Wyatt Family at Battleground, decided to celebrate their landmark accomplishment of the longest reigning WWE Tag Team Champions ever on Monday night. And that’s when I saw my favorite sign of the night.

Big E dives way too much to the outside when trying spears through the ropes and always lands on his head or neck or upper shoulders. It always looks like he gets hurt, but he bounces up and continues on fighting.

But he’s really going to injure himself one of these days, and I certainly would love to see him stop taking that unnecessary risk to his own health.

As the group celebrated their huge accomplishment, complete with new and actual Booty O’s cereal, Luke Gallows and Karl Anderson attacked the group and gave the Magic Killer to Big E. Will Gallows and Anderson be the next Tag Team Champions?

• The enhancement talents are back! Both Nia Jax and Braun Strowman faced “local competitors” whose main job was to make them look good. And, well, they did their job. Though, I felt sorry for James Ellsworth, who seemed to be scared beyond his wits as Strowman made his way to the ring.

Sorry, Sasha. This is the highlight of #Raw so far pic.twitter.com/qrWD3bk4Mj

• Enzo Amore and Big Cass took care of the Shining Stars, but not before R-Truth and Goldust played a little Pokémon GO at ringside.

Is @RonKillings trying to catch a Pokemon IN THE RING?! #RAW #PokemonGo pic.twitter.com/IwlNQHDSTW

I love this move #Raw pic.twitter.com/26wL7ZTcly

• The WWE Champion and Lunatic Fringe will be a guest on the Stone Cold Podcast in two weeks after Raw goes off the air.

• Brock Lesnar makes his return to WWE next Monday night on Raw at the Philips Arena in Atlanta.

• Neville d. Curtis Axel by pinfall via the Red Arrow.