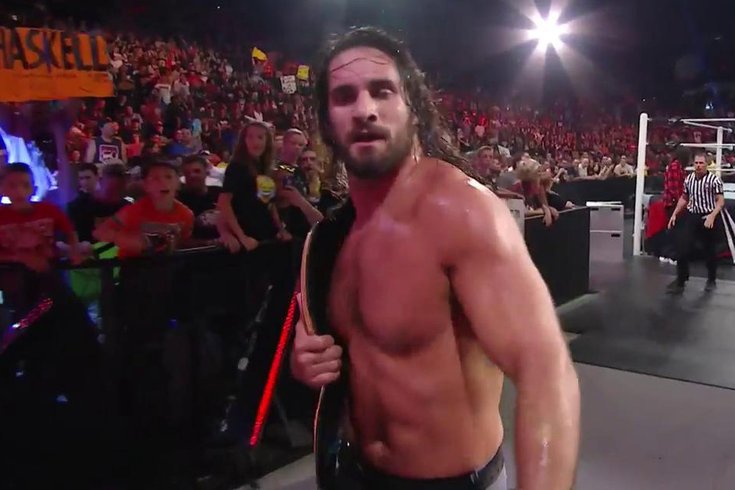 Seth Rollins walked off with the WWE Championship after Monday night’s main event, but would he remain champion after it was all said and done?

The last edition of Raw before the WWE's newest brand extension took place in the Dunkin Donuts Center in Providence, R.I. on Monday night. We had the announcements of the new Raw and SmackDown general managers, a WWE Championship match with Dean Ambrose defending his title against Seth Rollins, a huge 12-man tag match and more.

WWE made no mention of Brock Lesnar or his possible anti-doping violation on the program. In fact, more of the focus was on Randy Orton and his special interview set for Battleground this Sunday on Chris Jericho’s Highlight Reel.

The new Raw and SmackDown Live general managers are…

The program began with the announcements of the new general managers of Raw and SmackDown, with both Stephanie McMahon and Shane announcing their respective choices. The first choice was Stephanie’s and she announced her new general manager would be none other than the Hardcore Legend, Mick Foley.

Interesting choice. These two have had clashes for years, dating back to 1999-2000 when Foley and Triple H were involved in a bitter feud. But I guess that’s all out the window now. Even when Shane approached Foley backstage to warn him about Stephanie manipulating him, Foley took it as an insult and said he knows what he’s doing.

Speaking of Shane, his choice for the new general manager of SmackDown Live is the four-time former WWE World Heavyweight Champion, Daniel Bryan. The roof blew off the Dunkin Donuts Center when Bryan’s music hit.

With Foley and Bryan at the helm for their respective brands, it gives an old school and a new school feeling to WWE now. Foley’s from the older era into the Attitude Era, and Bryan just missed the New Era by months, but he’ll certainly be able to reel in viewers that SmackDown so desperately needs to make this brand extension a successful venture. The first one started out well, but disintegrated within a few years and it wasn’t special anymore. This time around, I’m hoping it’ll be a different story.

As for Foley and Bryan, they know they’re at war. And they met up backstage for an intense promo.

The WWE Championship match ends in controversy and chaos

Before the main event, the challenger did a promo in front of an empty arena. Yes, Rollins’ promo was taped earlier in the day Monday, but it was just as good as if he were in the middle of the ring talking to the audience. Rollins’ desire to be WWE Champion is something lost today in WWE. The title seems to be an afterthought most of the time. Even during Raw, I forgot we were being treated to a WWE Championship match because they barely talked about it until halfway through the show.

The WWE Champion gave his promo backstage before the match, so the build was set up for one of the biggest title matches in Raw history. And the main event featured one of the best matches Ambrose and Rollins have had, but ever since the match was announced on last Monday’s Raw, I felt like there would be some kind of false finish that would ultimately lead to two World Titles. And we got just that.

After a superplex off the top rope from Rollins on Ambrose, both Rollins and Ambrose hooked each other’s legs and both men’s shoulders were on the mat as the referee counted three. The confusion set in.

Though we might not see two world titles for a while, Raw’s finish may have planted the seeds for one in the not so distant future. After Raw went off the air with Stephanie declaring Rollins the new WWE Champion, the WWE Network aired a few more minutes of Raw where Shane declared Ambrose the winner. The referee wanted to see a replay and after numerous shots of both Ambrose and Rollins being pinned by the other, the referee declared the match a draw.

Ambrose is still the WWE Champion, but we might be in for some more shenanigans Tuesday night as SmackDown goes live and the WWE Draft takes place from Worcester, Mass. Stay tuned.

I originally didn’t like the idea of throwing in the two six-man tag team matches set to take place this Sunday at Battleground in one big 12-man tag team match, but I’d be hard pressed to not say this was the best match of the night. Ambrose and Rollins certainly brought it in the main event, but this match had many chances to falter and it didn’t.

One of the best parts was the many promos before the match. John Cena came out, then Enzo Amore and Big Cass came out. The Club was next, followed by The New Day.

This entertained me way more than I thought it would. Enzo was on fire as Cena played like he had no clue what he was talking about. Almost like Cena was out of touch with the “new kids.” The Club talked about beating up Cena,Amore and Cass before the WWE World Tag Team Champions saved the day with more promo gold.

The Wyatt Family was not afforded promo time because that segment went a really long time. The match itself was long, too, so I don’t blame them. If the Wyatts did have a promo ready to go, I probably would’ve cut it out, too.

Another interesting part of the match was at the end when Enzo accidentally decked Cena, allowing Styles to capitalize and nail him with the Styles Clash for the win. Was that foreshadowing to possible ill will between Enzo and Cena? With Enzo and Cass being legitimately the most over act in WWE right now, an Enzo/Cena mini-feud could be great.

The Cruiserweight Division is back

Maybe lost in all of the newsworthy moments on Monday night, in the beginning of the program, Stephanie announced that Raw would be the host for WWE’s Cruiserweight Division. Of course, SmackDown was the home for that division years ago when WWE had a Cruiserweight Championship, and it sounds like they’ll be reintroducing that title soon. I would imagine the winner of the Cruiserweight Classic might stake his claim to the title.

WWE also signed Gran Metalik and Kota Ibushi to contracts, so they’ll likely be either in NXT or the main roster’s Cruiserweight Division come this fall.

• Kevin Owens and Sami Zayn continued their blood rivalry in a tag team match to open Raw, and Zayn got the win for him and Cesaro after rolling up Jericho. Owens had some fun with Zayn during the match.

• Sasha Banks and Becky Lynch were attacked by their enemies, causing a disqualification in their tag team match. Natalya came out and attacked Lynch and Charlotte and Dana Brooke attacked Banks.

• Darren Young beat Alberto Del Rio with a bridge while The Miz was sitting at ringside with his wife Maryse.

• Yep, the new SmackDown Live general manager did The Dab.

Daniel Bryan does The Dab pic.twitter.com/K7OVqEp3aN

• Rusev made Dolph Ziggler tap to The Accolade in a tag team match.

• Over 50 former WWE talents, including the likes of “Superfly” Jimmy Snuka, Sabu, King Kong Bundy, Paul Orndorff, Road Warrior Animal among many more, are claiming WWE withheld information about the risks of head injuries while they wrestled under Vince McMahon and also are accusing McMahon of purposely calling his wrestlers independent contractors, allowing him to avoid liability for their injuries.

You can read the filing here.

• Sami Zayn/Cesaro d. Kevin Owens/Chris Jericho by pinfall after Zayn rolled up Jericho for the pin.

• Baron Corbin d. Sin Cara by pinfall via End of Days. Corbin continued attacking Sin Cara after the match until Kalisto came out. Corbin then attacked Kalisto from behind.

• WWE Championship: Dean Ambrose (c-WWE) vs. Seth Rollins ended in a draw. There was much controversy after the match, but Rollins’ music hit and he was declared the winner by Raw commissioner, Stephanie McMahon. On the WWE Network after the show went off the air, Shane McMahon declared Ambrose the winner before the referee saw a replay and declared the match a draw. Ambrose remains WWE Champion.