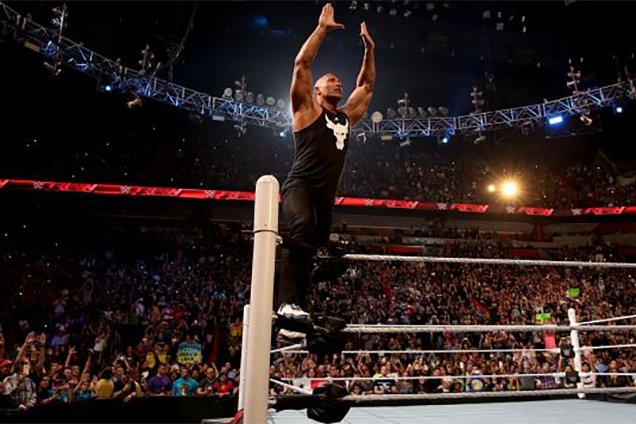 The Rock walked into Monday Night Raw at the American Airlines Arena in Miami like he never left.

WWE presented Monday Night Raw this week from the American Airlines Arena in Miami Sunday night, the COO of the company surprised everyone and entered the Royal Rumble match as the 30th entrant, eliminating both the former champion Roman Reigns and Dean Ambrose en route to his 14th world title reign.

WWE had also hyped on Twitter earlier in the day that a big star would be returning to Raw, and that was The Rock. But why was he there? Was there another surprise? Do we have a main event set for the next pay-per-view in February called Fastlane?

Here are some of the main stories coming out of Raw on Monday night:

We’ve got a Fastlane main event

Vince McMahon and Stephanie made their way to the ring to kick off the program, and introduced the new WWE World Heavyweight Champion shortly after. Triple H cut a really good promo about how Reigns has disrespected him, which is why he wanted the championship.

He doesn’t need it, he wants it. The promo really hyped Reigns instead of focusing on Triple H, which was really good.

Stephanie announced that the main event of Fastlane would be decided before the night is over, and the winner of that match would challenge Triple H for the WWE World Heavyweight Championship in the main event at WrestleMania 32.

The main event featured a tag team encounter with Reigns teaming with Ambrose to take on Rusev and Sheamus. Reigns would spear Sheamus and pin him for the win, and then both he and Ambrose would powerbomb Rusev through the announce table, old Shield style.

Stephanie came out before the program ended and announced the main event at Fastlane would be a Triple Threat Match: Dean Ambrose vs. Roman Reigns vs. Brock Lesnar.

The Rock vs. The New Day – did anyone win?

The Rock returned during a backstage segment and made his way all the way to the ring for an extended segment that the Internet seemed to love. Before he went to the ring, he addressed the Big Show in the back, saying if he wound up winning the 2000 Royal Rumble match in which the two were the last two men remaining that Show’s future could have been so different. Show started crying thinking about what could’ve been, and the exchange was done perfectly.

He then addressed Lana in a weirdly awkward way, basically insinuating he and she had hooked up before right as Rusev came into the picture. This was awkward and definitely didn’t really mesh with the TV-PG era in WWE.

As he hit the ring, he went off script and addressed four people in the audience who were moved away from the hard camera so the view of the ring wouldn’t catch them getting all the attention from the crowd. The Rock would address them as well, but then was interrupted by the WWE World Tag Team Champions, The New Day.

The two sides had a great back-and-forth promo, but some people weren’t happy with Rock insinuating Big E was a woman with large breasts and that he referred to the unicorn horns the group wears around their head as “llama penises.” That’s a no-no in 2016, apparently. I don’t think Rock was trying to be homophobic or sexist in his “jokes” during the promo, but a lot of people on the Internet felt that way. I can’t tell people how to feel, so let me know – were you uncomfortable with this promo?

Rock eventually brought out his family in the form of The Usos, who attacked the champions. I guess we’re still all-in with this feud despite it just feeling… old. The Rock and The Usos stood tall.

AJ Styles and Chris Jericho battled in Styles’ first one-on-one match on Monday Night Raw, but it looked like Styles will need a little more time to adjust to the “WWE style” of wrestling, which is much more slow paced than what he’s been used to. Sequences in matches in WWE are generally more slow paced to avoid injury, but when wrestlers are used to a much quicker pace, they tend to need a learning curve when coming to WWE.

Styles won a really good match and then he and Jericho shook hands and had a little staredown. I have to admit, Styles’ theme music is my new favorite theme in WWE. I also dig that we haven’t seen the Styles Clash yet, but the announcers keep teasing it. I think we will eventually see the move in a big spot, maybe not until WrestleMania.

I was preparing for a great match between Sasha Banks and Becky Lynch, but the Divas Champions prevented that from happening. In all honesty, I thought Kevin Owens would interfere in the Styles-Jericho match and Sasha-Becky would be one of the best matches of the night, but the exact opposite happened.

Charlotte attacked both women during the match, pretty much sending a message that she’s either ready for both challengers at once, or that she’s scared and needs to be one step ahead of both of them. I expect a Triple Threat Match between the three eventually, but Sasha-Charlotte for the title needs to happen at WrestleMania with Sasha going over.

• Paige and Natalya d. Brie Bella and Alicia Fox by pinfall after Paige hit the Ram-Paige on Brie.

• Non-Title: Kalisto (c) d. The Miz by pinfall via the Salida del Sol.