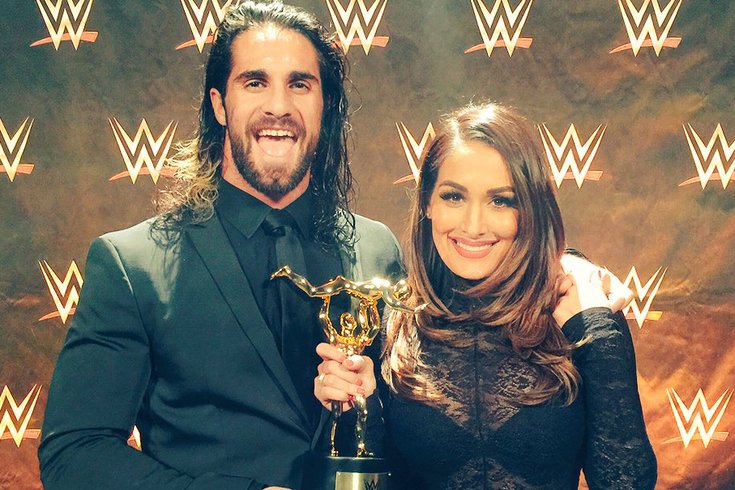 Seth Rollins returned on Monday night to claim his Superstar of the Year Slammy Award, and posed with the Diva of the Year Award winner, Nikki Bella.

The 2015 edition of the WWE Slammy Awards took place at the Target Center in Minneapolis, Minn., on Monday night, but there were a lot of disappointed fans not only inside the arena, but also watching on television at home. Not very many storylines advanced and it felt like this show was just a placeholder show for either next Monday night or Raw two Mondays from now. Not very much was accomplished other than superstars who weren’t even in the arena winning their fair share of Slammy Awards.

The biggest issue many had, including myself, was that a lot of the winners of certain Slammy Awards were not on hand to accept the award. Brock Lesnar, who resides in Minnesota, was not at the show for some reason. “Stone Cold” Steve Austin, The Rock, The Undertaker and Sting were some of the big names that technically won Slammy Awards that were not there to accept it.

And I get it. Schedules make it hard for everyone to be at the same show at once. But not having one name from the above list there really hurt the show. Despite an appearance from former WWE World Heavyweight Champion, Seth Rollins, on crutches and all, it just felt like the Slammy Awards disappointed virtually everyone.

Rollins appearing was quite a surprise, as he won Superstar of the Year, and was very well-deserving of it. But some categories were lacking some obvious nominations, such as Match of the Year not including any matches from NXT – especially the Bayley-Sasha Banks Women’s Championship match from NXT TakeOver in Brooklyn the night before SummerSlam.

Honestly, it’s hard to get angry at a show like this – it’s strictly for entertainment purposes only. That’s why Kevin Owens didn’t win Breakout Star of the Year – he was strictly used to build to a match later in the program against Dolph Ziggler. So, I get that part. But it just seemed like this year above many recent ones, the awards were just used as a pawn. And that’s why this entire show left a bad taste in my mouth.

It’s a shame after such a great Raw in Philly last Monday night we got a show like this.

NEXT MONDAY: @JohnCena returns on the final #RAW of 2015 to take on the man who beat him at #HIAC...@VivaDelRio! https://t.co/KA0NLuNf5U

We do, however, have the return of John Cena to look forward to next Monday night, as he’ll return to the ring and take on Alberto Del Rio.

WWE.com teased all weekend that The Authority would have some payback in store for the new WWE World Heavyweight Champion, Roman Reigns. That didn’t exactly happen on Monday night, as Stephanie McMahon’s version of payback only included putting Reigns’ cousins, the Usos, in a handicap match against The New Day and Dean Ambrose into a Steel Cage match with Sheamus.

The League of Nations would come out and help Sheamus by crashing the steel cage door into Ambrose’s skull. But then, Ambrose would get a little bit of help himself.

Reigns would return and took them out with a chair, and then tossed the chair into the cage to Ambrose.

You wouldn't know it to look at him, but @TheDeanAmbrose is your winner in this #SteelCage main event! #SLAMMY pic.twitter.com/4wuBVNJNIr

Ambrose hit Dirty Deeds on Sheamus onto the chair, but Sheamus wasn’t done yet. The two would fight on top of the cage to hanging outside of the cage before Ambrose would drop down to the floor first to win the match. It was a really good main event on an otherwise poor Raw. Though, it did look like a pretty brutal match.

The best part of this was Todd Phillips trying to get a word from Stephanie backstage after the match and her just unleashing a fury of slaps, taking him to the ground.

Someone get Todd some ice, please.

When Rollins’ music hit, the crowd became electric. His return was probably the highlight of the night, even if it was just him accepting the Superstar of the Year Award, and he showed some obvious emotion during his speech. He likely won’t be back until late spring, early summer as he’s currently rehabbing a torn ACL. The fans loved seeing him, though, as did I.

The Usos, who won the Slammy Award for Tag Team of the Year, faced the WWE World Tag Team Champions, The New Day, in a handicap match. What a lot of people had a gripe with was the Usos winning the Slammy for Tag Team of the Year, especially considering Jey Uso was out for half the year with a shoulder injury. The New Day was the clear-cut winner and they were robbed of some extra gold that they could’ve added to their repertoire.

Not only did the champions get jobbed out of a Slammy Award, but they also lost in a handicap match against the Usos. The champions have been beaten the last two weeks in each match they’ve been in except the Ladder Match for the Tag Team Titles at TLC. They defend their titles at Super SmackDown Live Tuesday night against the Lucha Dragons.

I’m pretty sure WWE rigged the vote for Breakout Star of the Year, because there’s no way Neville should have won over Owens. I love both guys in the ring, but Owens was leaps and bounds above everyone that came up this year. Fan vote schman vote, Owens won this category hands down.

But, WWE purposely had Neville win just so they could set up a match between Owens and Ziggler later in the program. That’s certainly the feel that I got from it. It was a little too convenient Owens came out there right away and then brawled with Ziggler.

At least Owens realizes that award really is his.

Paul Heyman announced the winner for the OMG! Moment of the Year Award, which went to Kalisto for his insane Salida del Sol at TLC off the top of the ladder. I still can’t believe he did that.

In keeping up with current events, WWE decided to take a shot at Steve Harvey’s gaffe at the Miss Universe pageant on Sunday night by having R-Truth announcing the wrong winner for Diva of the Year, incorrectly naming Paige as the winner of the award.

Nikki @BellaTwins dedicates her #SLAMMY to all of the women in @WWE! #SLAMMY @WWEDivas pic.twitter.com/abNAX6Zah0

Much to the chagrin of probably most of the audience, Nikki Bella would actually win Diva of the Year. What was especially weird about this, however, was Paige sticking around for Nikki’s acceptance speech and then hugging her after it was over. They’re supposed to be bitter enemies. I guess nothing matters during the Slammy Awards. Unless it does. Who the hell knows anymore?

Santino Marella returned and provided some great comedy relief that was sorely needed during this show. He would be a great announcer to Superstars, Main Event, or even Raw or SmackDown. He’s great and should be utilized on television as much as possible since his in-ring career is pretty much finished due to a neck injury. We need more Santino.

As for Stephen Amell winning a Slammy? Stardust wound up stealing his. I’m starting to think we haven’t seen the end of this feud between the two.

St. Mick is back this holiday season.

Here are the 2015 Slammy Award winners for each category:

Match of the Year: Brock Lesnar vs. The Undertaker – Hell in a Cell

“This Is Awesome!” Moment of the Year: The Rock and Ronda Rousey confront Triple H and Stephanie McMahon at WrestleMania 31

Diva of the Year: Nikki Bella

The Hero in All of Us Award: John Cena

Superstar of the Year: Seth Rollins

OMG! Shocking Moment of the Year: Kalisto’s Salida del Sol from the top of the ladder at TLC

LOL! Moment of the Year: R-Truth’s Money in the Bank promo

Breakout Star of the Year: Neville

Double-Cross of the Year: Damien Mizdow turning on The Miz in the Andre The Giant Memorial Battle Royal at WrestleMania 31

Rivalry of the Year: Brock Lesnar vs. The Undertaker

Tag Team of the Year: The Usos

Hashtag of the Year: #SuplexCity

Celebrity Moment of the Year: Stephen Amell dives onto Stardust at SummerSlam

“Tell Me You Didn’t Just Say That” Moment of the Year: Brock Lesnar’s “Suplex City” at WrestleMania 31

We’ve got Super SmackDown Live on the USA Network Tuesday night, so look for my recap from the show, which will be highlighted by two title matches, on Wednesday right here on PhillyVoice.

Wednesday night, WWE also presents their annual Tribute to the Troops special on the USA Network, and I’ll have a recap of that show on PhillyVoice right after it airs.

• Kane d. Bray Wyatt by disqualification after the Wyatt Family attacked Kane. The Dudleys and Tommy Dreamer ran down for the save.

• The Wyatt Family d. The Dudleys, Tommy Dreamer and Kane by pinfall via a Luke Harper clothesline on D-Von Dudley.

• Non-Title: Alberto Del Rio (c-US) d. Jack Swagger by pinfall via the Tree of Woe stomp. The League of Nations was ringside and attacked Swagger after the match.

• Handicap Match: The Usos d. The New Day by pinfall via a reverse rollup.