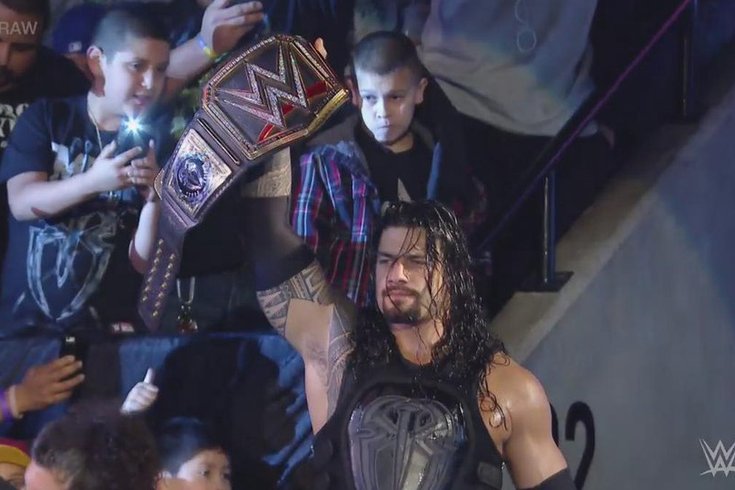 Roman Reigns has a much bigger challenge lying ahead at the Royal Rumble after Monday night.

Monday Night Raw’s first episode of 2016 got off to a hot start, as WWE tried to begin the new year by advertising a WWE World Heavyweight Championship match a week in advance. Oh, and Vince McMahon would also be the special guest referee.

The AT&T Center in San Antonio, T.X. played host to one of the most convoluted endings in a main event I can long remember. But, not long after that, Vince McMahon redeemed some questionable creative decisions and made a huge announcement that’ll change the entire Royal Rumble match on January 24th.

If you haven’t been paying attention to WWE lately, Vince McMahon being back on television is a huge deal, and ratings have gone up since he’s been back. Will he continue to show up week after week? In short, if the ratings keep going up, then yes.

With his WWE World Heavyweight Championship on the line, Roman Reigns was able to defeat Sheamus in the main event on Monday night, but the ending was one of the worst in recent memory. Reigns would hit the Superman punch on McMahon – again – but the CEO would eventually recover. But when Reigns was prepping to spear the heck out of the owner, Sheamus blindsided him with two fantastic Brogue Kicks and went for the cover.

McMahon was clearly in the picture and could have counted the pin if he wanted to, but crooked referee Scott Armstrong, who’s in the pockets of The Authority, showed up to make the count, but Reigns would kick out. This made no sense whatsoever because McMahon was the guest referee and he should have been counting the pin, not waiting for Armstrong, who was late getting to the ring, to show up.

Everything just went out the door after that, and Reigns hit the Superman punch on Sheamus, crooked ref Armstrong, and speared Sheamus for the win as a new referee came out to count the pin. This was very overbooked and the ending got messed up, but that’s what happens when the creative team tries too hard to do something different. It made it look just really, really bad.

But, it wasn’t all bad. McMahon, frustrated over Reigns retaining his championship, issued the following decree: Reigns now has to defend his championship in the 30-man over-the-top-rope battle royal we’ve come to know today as the Royal Rumble match. This is a great move and I think will make a lot of people interested in seeing where it goes.

I fully expect Reigns to retain, but it’s how they get there that should be interesting. And that gives February’s pay-per-view in Fastlane some more clout when it’ll likely be used to determine the No. 1 contender for the WWE World Heavyweight Championship. Great move by WWE here, and it really helps elevate Reigns to that next level they want him to be at. He’s in a great spot now.

Chris Jericho made his triumphant [?] return to WWE on Monday night during a promo with the WWE World Tag Team Champions, The New Day. Save for a few insults between the two parties, and Jericho getting the crowd to chant, “Rooty Tooty Booties!” at the champions, all this segment did was announce Jericho’s entrance into the 2016 Royal Rumble match before The New Day would participate in a six-man tag match that really meant nothing.

The Wyatt Family - the new Horsemen?

When Bray Wyatt and company interfered in the Ryback-Big Show match on Monday night, I wasn’t too thrilled at all. I thought it was an attempt to re-hash a previous feud that Wyatt had with Ryback last year, but it turns out it may have been a great way to re-introduce the Wyatt Family as the feared group they should be.After taking out Ryback, the group turned its attention to Big Show and took him out as well. After they were finished, they posed outside the ring with Wyatt’s classic pose on his knees with Braun Strowman, Luke Harper and Erick Rowan using the sign of the Four Horsemen, but in a downward position instead of upward. Could this group now be turning the corner and becoming the feared entity it should be? I sure hope so.

Kevin Owens gets his win back

Last week, Neville defeated Kevin Owens in 20 seconds. This week, in a longer match, Owens got his win back and pinned Neville after hitting him with the Pop-Up Powerbomb. He would attack Neville after the match, but Dean Ambrose would make the save as he was chilling on commentary at ringside, setting up one of two title matches on the first edition of SmackDown on the USA Network on Thursday night. Ambrose will defend his Intercontinental Championship against Owens Thursday, and something tells me we’re going to see a title change. Stay tuned.

Becky Lynch gets some payback

After losing to Charlotte a few times after the Divas Champion cheated her way to victory, Becky Lynch exacted some revenge on Monday night by pinning the champion by holding her tights. Charlotte wasn’t very happy with this outcome and attacked Lynch after the match. So, heel turn complete? I think so.

The Divas Championship will be defended on SmackDown on Thursday as the first episode on SmackDown will feature Charlotte and Lynch battle it out once again. I’m pulling for Lynch again.

The Social Outcasts are born

Heath Slater, Adam Rose, Curtis Axel and Bo Dallas are now a unified group, as the Social Outcasts were born on Monday night. Slater was joined by his teammates during his match with Dolph Ziggler, which he surprisingly won. The group then grabbed a mic for a promo up on the ramp before the commercial break. It’ll be interesting to see where they go with this group.

Unfortunately, it’s another reactionary measure when the creative team has no idea what to do with these guys. Sure, now they’re given something to do, but it seems so unoriginal and lacking in creativity that I have no hope this will succeed long-term. I hope these guys can prove me wrong. The New Day sure as hell did.

• The NXT Year-End Awards voting is now open, with the January 13th episode of NXT on the WWE Network being billed as the Awards show. I’m not sure how that episode will be done, but you can vote here.

• Tonight at 9 p.m. on ESPNews’ SportsCenter, the Intercontinental Champion, Dean Ambrose, will join Jonathan Coachman for an interview.

• Kevin Owens d. Neville by pinfall via the Pop-Up Powerbomb. Owens attacked Neville after the match, but Dean Ambrose, who was doing commentary at ringside, made the save.

• Titus O’Neil d. Stardust by pinfall via the Clash of the Titus.

• Non-Title: Becky Lynch d. Charlotte (c) via a rollup by holding her tights. Charlotte attacked Lynch after the match.

• Ryback vs. Big Show ended in a No Contest after the Wyatt Family appeared and took out both men.

• Alberto Del Rio and Rusev d. The Usos by pinfall after Del Rio hit Jey Uso with the Double Stomp.

• Heath Slater d. Dolph Ziggler by pinfall via a rollup.

• The New Day d. The Dudley Boyz and Kalisto by pinfall via the Double Big Ending on D-Von Dudley.