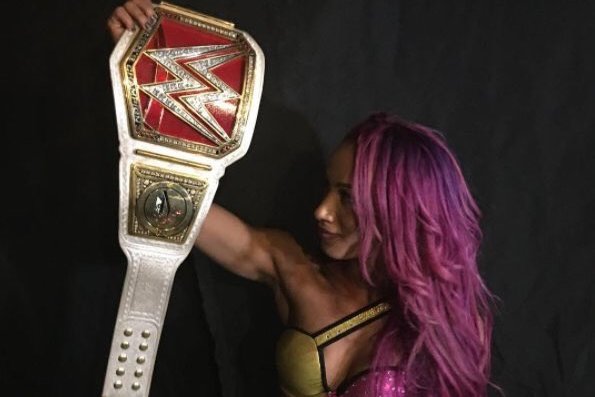 Sasha Banks after she won the Raw Women’s Championship Monday night for the second time.

With Hell in a Cell now at the forefront, the Staples Center in Los Angeles hosted Monday Night Raw, which already has one Hell in a Cell match confirmed for the October 30 pay-per-view. I’m sure we’ll see another one added soon, as we have almost a full month before the event.

This edition of Raw was supposed to highlight the women’s division as Charlotte would defend her championship against Sasha Banks. It was confirmed early on in the show that the match would be the main event of the evening.

It wasn’t their best performance, but Banks and Charlotte weren’t exactly given a lot of time for their match to develop. That might be the only downfall of the Women’s Championship match on Monday night being the main event of the evening.

The match started late (about 10:50 ET) and within three minutes, the USA Network went to a commercial break. It’s really hard to get invested in a match under those circumstances, but when it’s Banks and Charlotte, I’ll be happy to overlook it.

Charlotte did a ridiculous corkscrew moonsault from the top rope to the outside of the ring, barely striking Banks but making it a spectacle nonetheless. With the emotion building and the crowd getting more and more into it, Banks locked in the Bank Statement.

Charlotte reversed it into a pinning combination, but Banks quickly kicked out of that and wrenched back hard on her submission hold, forcing Charlotte to tap out and give Banks her second Women’s Championship.

Banks spoke backstage after the match.

Reigns and Rusev set to battle in Hell

Roman Reigns, sporting the WWE United States Championship, opened Raw but was quickly confronted by Lana. She demanded Reigns give Rusev a rematch for the title after last Monday’s no contest. Reigns wouldn’t give an answer, then Rusev showed up and kicked Reigns a few times into another world it seemed. The champion, however, would return and hit a Superman Punch on Rusev on the stage and stand tall. He announced he would face Rusev in a Hell in a Cell match for the United States title at the next Raw pay-per-view.

Rollins and Owens continue their feud

Seth Rollins had a sit-down interview with Michael Cole and blamed Raw commissioner, Stephanie McMahon, for Owens retaining his Universal Championship at Clash of Champions. He said he wanted a rematch and vowed to end “The Kevin Owens Show.”

Owens would respond to Rollins in the form of an in-ring promo with his best friend, Chris Jericho. Owens suggested if Rollins wanted a rematch against him, that Jericho be the special guest referee. While that sounded good to Jericho, he was more focused on the Raw tag team titles and said he and Owens should face The New Day and make history.

That was all the tag team champions needed to hear. Big E, Kofi Kingston and Xavier Woods made their way out to the arena. They ran down both Owens and Jericho, but were upset when they made Jericho’s list. I can’t blame them. I sure as hell wouldn’t want to be on that list.

Raw general manager Mick Foley would make a tag team match between the two teams, but not for the titles.

During the match, Rollins’ music hit and distracted Owens for a moment, and The Architect just stood on the entrance ramp until Jericho locked in the Walls of Jericho to Woods. Rollins ran down to the ring and Jericho let go of the hold, ready to fight with Rollins. Big E got the tag and he and Woods were able to hit the Midnight Hour on Jericho for the pin.

After the match, Rollins hit Jericho with a Pedigree for good measure while Owens watched from the ramp.

In TJ Perkins’ backyard, Brian Kendrick wanted to send a message that he’s the best cruiserweight on the WWE roster. With his victory on Monday night, he likely earned himself a future title shot once again.

Tony Nese and Rich Swann also battled in a cruiserweight clash, with Nese coming out on top.

Other than those main stories, not much happened on Raw last night. Braun Strowman demanded Foley give him better opponents, so there’s that.

•    Braun Strowman d. Chase Silver by pinfall via a powerslam.

•    Cesaro/Sheamus d. by pinfall via a Brogue Kick.